Today, Netflix released the character poster of Kilgrave, played by actor David Tennant (Doctor Who, Broadchurch, Harry Potter and the Goblet of Fire), from the highly-anticipated original seriesMarvel’s Jessica Jones, which will premiere on November 20 at 12:01am PT in all territories where Netflix is available.

An enigmatic figure from Jessica’s past, Kilgrave’s reappearance will send shockwaves through the former super hero’s world. 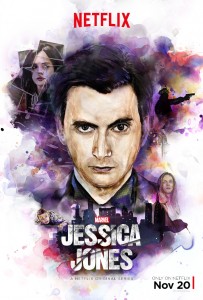 The Netflix original series Marvel’s Jessica Jones is the second of four epic live-action adventure series (Marvel’s Daredevil , which is now streaming, Marvel’s Luke Cage and Marvel’s Iron Fist, all leading up to the teaming of the main characters in Marvel’s The Defenders) to premiere only on Netflix. It is a suspenseful, edgy look into the life of Jessica Jones, one of the most popular new Marvel characters of the last decade, as she faces demons from within and without. The drama will premiere with thirteen (13) one-hour episodes.

About the show:
After a tragic ending to her short-lived Super Hero stint, Jessica Jones is rebuilding her personal life and career as a detective who gets pulled into cases in New York City.
Krysten Ritter (Jessica Jones) is joined by an amazing cast including David Tennant (Kilgrave), Mike Colter (Luke Cage), Rachael Taylor (Trish Walker), Carrie-Anne Moss, Eka Darville, Erin Moriarty, and Wil Traval, among others.
Marvel’s Jessica Jones on Netflix is Executive Produced by series Showrunner Melissa Rosenberg (“Twilight”, “Dexter”) and Liz Friedman (“Elementary”), along with Jeph Loeb (“Marvel’s Daredevil,” “Marvel’s Agents of S.H.I.E.L.D.”), who also serves as Marvel’s Head of Television.