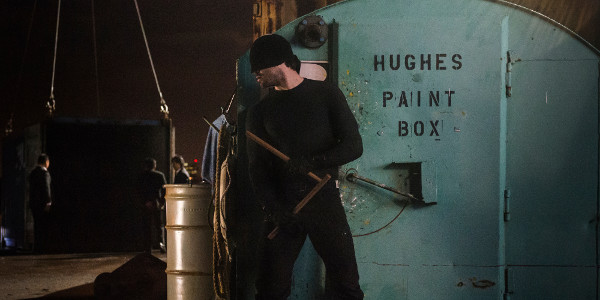 A new dark and gritty hero joins the Marvel Cinematic Universe in a huge way.

I just got finished watching the first five episodes of the new Netflix series, Marvel’s Daredevil, and it can be summed up in one word:

I was fortunate enough to catch the Daredevil panel at New York Comic Con. One of the questions that Executive Producer Jeph Loeb was asked is how this series fits into the Cinematic Universe and his answer was: “It’s all connected.” And it is. One of the first things Daredevil does is to let you know this entire series takes place after the invasion of New York that happened in the Avengers film. That’s one of the main backdrops of the story.

The look of the series is dark and gritty, not at all pleasant. And it’s not just the visuals, but some of fight sequences, which are not glorified as in a lot of action films. They are realistic, brutal, and disturbing… and that’s just the ones with Daredevil in them. But it works. Then there’s the fighting style that Daredevil uses, a combination of acrobatics, martial arts, and boxing. The boxing is important because of Daredevil background as the son of a boxer. The cinematography is truly top notch here.

And the cast! Charlie Cox just nails it as Matthew Murdock/Daredevil. His portrayal is very close to both Frank Miller and John Romita Jr’s Man Without Fear and Brian Michael Bendis’ Daredevil runs. He’s troubled and torn, just wanting to do what’s best for his city.

Vincent D’Onofrio pulls off Wilson Fisk (AKA the Kingpin) with a constant quiet rage. Like a calm before the storm, you don’t know when it will hit… he is very controlled. And to the fans who think D’Onofrio needs to gain more weight to look just like his comic counterpart, just watch and you’ll see he does an excellent job playing the classic villain.

I would love to go into greater detail, but I’m afraid I’ll give away too much. But let me bottom line it– you have to watch this show. Comic fan or not, you’ll really enjoy Daredevil.

Marvel’s Daredevil premiers on Netflix April 10th at 12:01 AM EST.