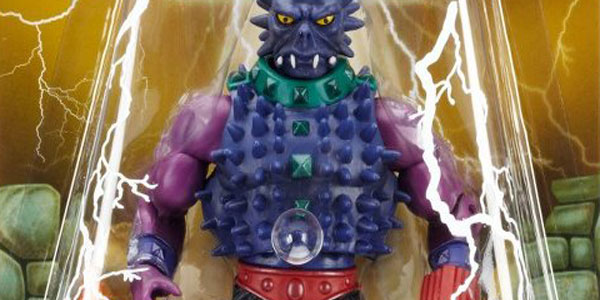 Mattel has once again released some new in-package shots of some upcoming Masters of the Universe figures. This time out we get a first look at the cards and bios of Spikor as well as Geoff Johns’ original character Sir Laserlot.

Spikor was one of those dudes in the original Masters line who never really got his due– released relatively late in the line, he never got much of a back story, despite the fact that he was one of the cooler minions of Skeletor. I had always imagined Spikor as a mutant porcupine creature, but according to his new bio I guess he’s actually a dude magically sealed in a spiky suit of armor. Color me mistaken– let’s just chalk it up to youthful indiscretion. In any event, the new Spikor figure looks like a great homage to the purple-on-purple bad guy, and I’m curious to see if Mattel will work either his pliable, squishy head and chest (likely) or his extending trident-hand (less likely) into the new figure.

I’m still not that blown away by Sir Laserlot’s design– he’s too monochromatic– but I do like that his bio connects some dots in a neat way. Laserlot is one of two 30th Anniversary creations traveling between multiple generations of the Masters universe (along with his “buddy” Mighty Spector), and linking the sci-fi knight to both King Grayskull, as well as a clever nod to the unproduced He-Ro, Son of He-Man mythos, makes for a pretty robust back story.* 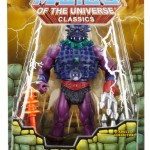 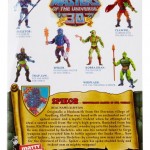 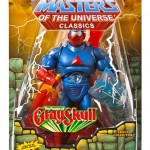 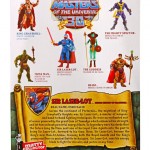 (*a back story that seems every bit as convoluted and full of obscure throwbacks as you’d expect from Geoff Johns.)