A Night With Dennis O’Neil And Friends

O’Neil, known as the Dean of American Comics, is responsible for the vi-sion of Batman in current comic and film lore. He has worked as an edi-tor/writer for DC Comics and Marvel Comics and as a writer at Charlton Comics. Mr. O’Neil has received numerous awards throughout his ca-reer and was honored with the 2014 Will Eisner Hall of Fame Award at Comic-Con.

In exploration of an extraordinary career, Mr. O’Neil will participate in a conversation with Michael Uslan, the Originator of the Batman movie franchise. Mr. Uslan is also Executive Producer of: Batman v. Superman: Dawn of Justice; Batman; Batman Returns; Batman: Mask of the Phantasm; Batman Begins; The Dark Knight; and The Dark Knight Rises. The conversation will be moderated by Paul Levitz, former President & Publisher, DC Comics. GARNER’s Dye Works space will be filled with posters, artwork and videos from O’Neil’s exten-sive collection.

Mr. O’Neil began his writing career as a newspaper reporter, coming to New York as Stan Lee’s Editorial Assistant at Marvel Comics. In 1967, O’Neil joined DC where, in addition to editing the Batman titles, O’Neil, a group editor, scripted such titles as Wonder Woman, The Justice League of America and 13 issues of Superman. After the cancellation of the Batman television show, Mr. O’Neil and artist Neal Ad-ams took the character back to his roots and created the version of Batman which inspired all recent Bat-man movies and animated series. O’Neil and Adams collaborated to produce the Green Lantern-Green Arrow series which earned praise and media attention for its ground-breaking combination of flamboyant fantasy and social themes.

During his career, O’Neil has written stories for numerous DC and Marvel Comics’ major titles, including Batman, Spiderman, Iron Man, Hawkman, The Atom and Daredevil, as well as for Gentlemen’s Quarterly and New York Magazine. O’Neil has authored numerous books and teleplays, and adapted Batman mov-ies into comic books and novels, most recently Batman Begins, which was partially based on O’Neil’s work.

GARNER will present Mr. O’Neil with its first Lifetime Achievement Award. “GARNER’S Lifetime Achievement Award celebrates the significant and sustained contributions of artists whose pioneering work has had national, and in some cases, international impact. Mr. O’Neil’s work on Batman and other titles inspires legions of comic, film and television fans and professionals throughout the world. O’Neil’s focus on social, psychological and political issues in his work gives his characters a depth which trans-cends the world of fantasy”, states Robin E. Rosenberg, GARNER’s President.

Tickets for this event are $65 for the VIP Meet & Greet with O’Neil and the panelists (includes one hour open bar and hors d’oeuvres – limited to 50 attendees) or $40 for general admission tickets to the panel discussion and award presentation. Tickets and more information can be found at garnerartscenter.org.

GARNER is located within the Garnerville Arts & Industrial Center, aka “GARNER Historic District of New York”, which is comprised of twenty-eight 19th century buildings listed on the National and State Regis-ters of Historic Places, and a creekside sculpture trail. 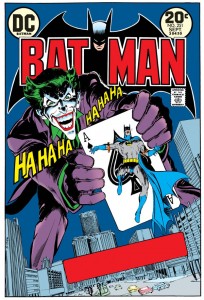