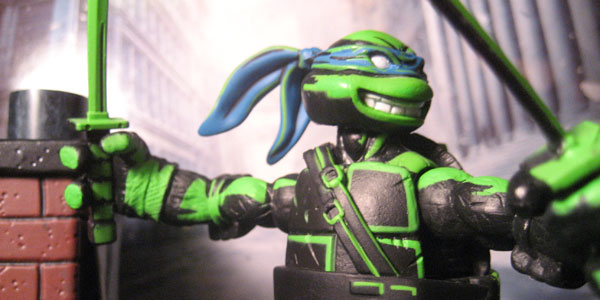 One of the last Comic Con exclusives t be revealed– and one I was most looking forward to– was the Night Shadow Leonardo, released to hype the upcoming Teenage Mutant Ninja Turtles line by Playmates and Nickelodeon.  While the final product looks great, it’s plagued by so many drawbacks, both situational and practical, that I just can’t give Playmates a pass on this one.

Night Shadow Leonardo was one of the few Comic Con exclusives revealed in advance by Nickelodeon, and the dramatically-lit Turtle seemed to be a stylized alternate deco to the single-card release from the brand new TMNT toy line just hitting retail. Their booth had lots of other cool items for sale, including prints in the classic Mirage style TMNT, t-shirts and more.  What they did not have at the Nickelodeon booth was any idea how to manage a line. 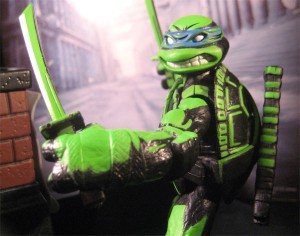 Exclusives are an ever-increasing factor in attending a show as huge as Comic Con, and each company handles their products in a different way. Nick opted to split their inventory by day, meaning they’d only sell “x” number of each item a day before calling it sold out until tomorrow.  It’s not a terrible idea, since it gives a fair chance to everyone (even Sunday-only attendees, who often get screwed out of buying stuff that might have sold out Friday or Saturday), but what Nick did not plan for was the volume of their line.

I told myself going in to Comic Con that I wouldn’t deal with any unreasonable lines this year. So when I went to the Nick booth first thing on Thursday morning and saw maybe 50 people, I thought “well, that’s not too bad– Hasbro can get through over a hundred people an hour, so this won’t take too long.” Boy, was I wrong.  The Nick booth had only one register, and only two employees dedicated to the sales area (and apparently a dozen employees elsewhere in their booth, whose job it was to stand around and text on their cell phones). They also had no sizing chart for their t-shirts, and all their sale items were in a back room, which had a door that required even a short person to crouch and crawl through.  All this added up to a total mess– the sluggish line took over 90 minutes to get through, which was not fun for me, but I felt even worse for the folks farther back in line. By the time I got to the front, there were maybe 20 Leos left for the day, but the line had amassed to a few hundred people, and no one thought to cap the line or warn that Leo would most likely sell out before they could get one. Spending 90 minutes in line sucked, but spending 2 hours in line to leave empty-handed would have been worse. 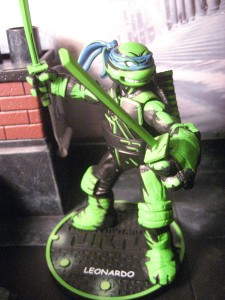 I brushed off the horrible experience, telling myself at least I got my figure.  When I opened him up later, I realized this wasn’t technically true… unbeknownst to me when I bought him, Night Shadow Leo is NOT a figure… he’s a statue!  For some unexplained reason, rather than re-deco the already-produced Leo figure with a snazzy new paint job, Night Shadow Leo is an all-new sculpt, devoid of any articulation.

Gone are the excellent elbow, wrist and knee joints of the other TMNT figures, and the shoulder, hip and neck joints have all been fused in place, leaving a completely static figure that still inexplicably includes removable swords and working sheaths (as he looks absolutely ridiculous with his twin katana stored on his back and his arms in the air for no reason).

Giving some credit where credit is due, the paint job is still definitely cool, lending a hyper stylized, shadowed look, with much of Leo covered in black and only the edges of the figure colored in a bright green to suggest a light source shining on his from his left.  The figure also includes a mice sewer cover display base, featuring a good glowing green-on-black deco which is much more successful than Hasbro’s similar attempt on their Big Time Spider-Man figure earlier this year.

If Night Shadow Leo had been a mass release figure, I don’t think I’d be quite as critical.  But when it comes to Comic Con exclusives, factors like the inflated price of short-run products, and the headache that is trying to obtain them demand a certain level of quality to really be worth the hassle.  In that respect, Night Shadow Leo is absolutely not really worth the his $30 price tag, and absolutely not worth the trouble it took to pick him up. 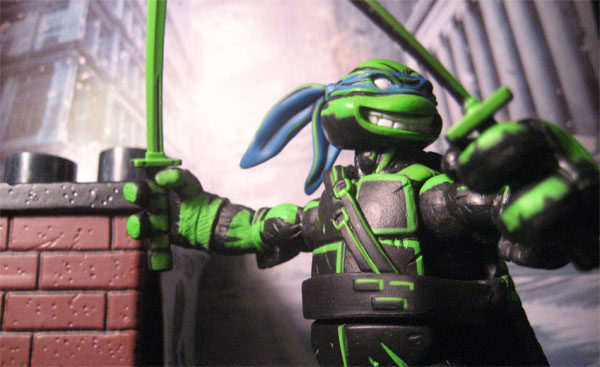 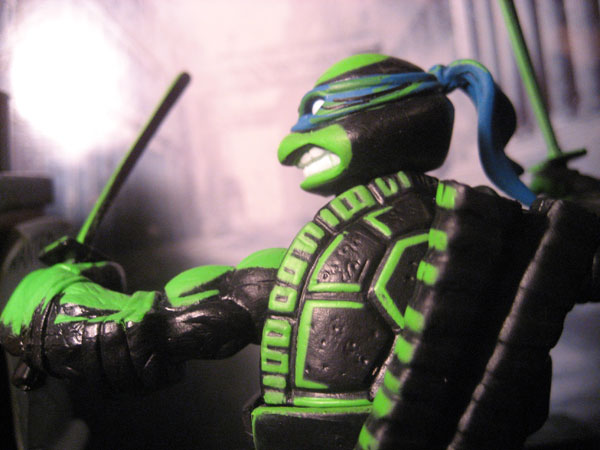 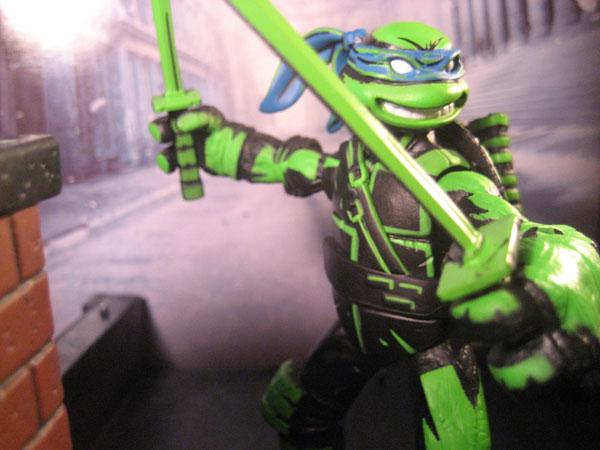 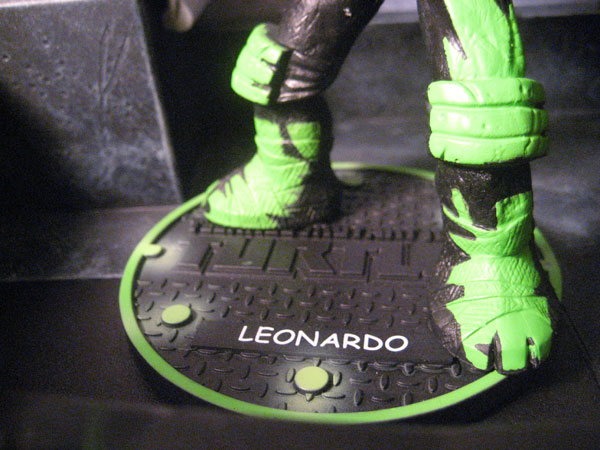 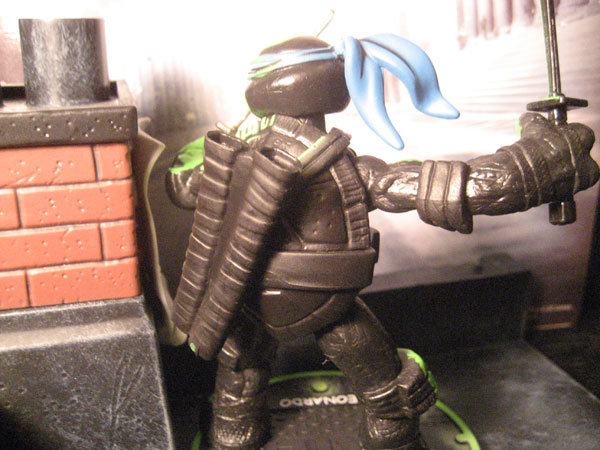