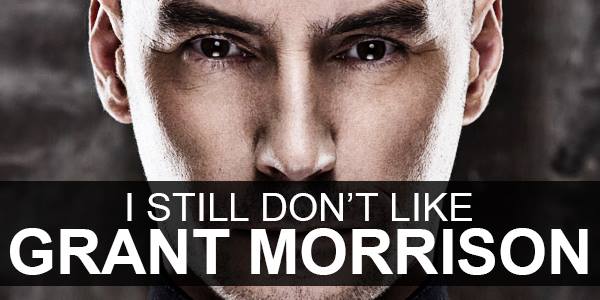 I tried giving Grant Morrison another chance, but my initial assessment still remains the same.

Anyone who knows me knows that I don’t like Grant Morrison. But right now, he does seem to be a the comic book equivalent of a rock superstar. So, I decided to look further into his work and see if I still feel the same.

My goal here is for this not to come across as the usual nerd rage. So, you’ll have to excuse me if at any point it feels like I’m wavering towards that. Trust me when I say, my intention is not to go on a bashing rant. But rather, analyze what I like and don’t like about Grant Morrison.

With all that being said, I selected what I felt was a good sampling of his work. The following are the books I read:

While this is not Grant Morrison’s full body of work, I feel it’s a good sampling for the purposes of this article.

One of the things that clearly sticks out in my mind about Morrison’s style is his lack of what I call “linear writing”. I classify “linear writing” as telling a story from point A to point B. Pretty much standard storytelling. Morrison seems to start a story, goes off and tells another story, then comes back to the first part of the story to finish it. The thing is, it’s so sloppily done. It’s too much “all over the place” writing for my tastes. It makes me lose momentum as a reader, because when he comes back to the initial story, so many other things have gone on, that I have no clue what’s going on.

Now here’s the really funny part…I actually liked Morrison’s creator owned stuff. WE3 is an amazing story. The concept of using animals as weapons doesn’t seem as far-fetched as one might think. Over the year, I’ve heard rumors of adapting the book into a movie. Personally, I think would work pretty well.

Another of Morrison’s own titles, Joe the Barbarian, was good as well. It was a little surreal but, still an enjoyable read. As was the Invisibles. That book was pretty “out there”, but again, I still enjoyed it. The same goes for Steed And Mrs. Peel. While they’re based on the old Avengers TV series and not creator owned by Morrison, the concept still complements Morrison’s writing style.

It’s when we get away from creator owned material that we get to the problem. While Morrison’s experimental, abstract, “pushing the boundaries” style works for the previously mentioned stories, it does not work for superhero titles.

New X-Men, for example. When Morrison wrote that title, I wasn’t a fan. The characters acted out of character, like the way they all just accepted Xorn (who was Magneto in disguise) into their inner circle. That’s beyond me. The only thing I really liked on Morrison’s run on the X-Men was that he turned the School for Gifted Youngsters into an actual school. It wasn’t just about 20 students. The doors were opened and the enrollment went up to where most private school levels are…to around 200 students. That made sense.

Then there’s All-Star Superman. All-Star Superman won an Eisner Award but personally? I think it’s extremely overhyped book. I read it multiple times at this point and I still remain unimpressed. A lot of people say this is the quintessential Superman. I completely disagree. We are once again subjected to Morrison’s nonlinear form of writing. It doesn’t work for me. It truly seems all over the place.

When the project was first announced, the storyline was supposed to be about the 12 labors of Superman (that would span over 12 issues). The first three issues showed three labors. And then? There was some filler nonsense. The last two issues of the series rushed the rest of the labors.

The funny thing about All-Star Superman are the people who say they love the story but don’t read the character on a regular basis. Their biggest complaint? They say Superman is too God-like. But…that’s exactly what Morrison did in All-Star Superman! He made Superman an omnipotent being!

I will say this about Morrison and All Star Superman: You can definitely see his love of Superman, especially the Silver Age stories.

My main problem with Grant Morrison, though? His writing for the DC Universe. This is the section of his body of work that I really dislike the most.

Starting with the Doom Patrol. I really didn’t appreciate his surrealist take on this classic team. I’m a huge fan of the original Doom Patrol stories from the Silver Age, as well as their revival in the 70’s. And I loved it when they showed up in New Teen Titans in the 80’s. I even collected their title when it came out in ’87. But, as soon as Morrison started writing it on issue #19…I just couldn’t take it. I actually remember being offended by what Morrison did to one of my favorite teams. I feel it’s something that Doom Patrol has never recovered from since. And, yes, I did recently read the Grant Morrison Doom Patrol Omnibus and still remain unimpressed.

Then there’s his run on Batman. This run is just so out there. Part of the reason was Morrison making everything in Batman’s 75 years of existence “in continuity”. From Zur En Arrh to the founding of Batman Incorporated, everything was now part of Batman’s continuity. Personally, it made things more confusing. I’m all for retcons if they keep the characters young. But, including everything that happened just doesn’t work. Plus, Morrison made Batman the most untrusting person in the DCU, and yet he’s somehow able to accept that Talia Ah Ghul gave him a son?!?!? The only acknowledgment was an off-panel paternity test. I just don’t buy it.

And Final Crisis? Final Crisis is just a mess. First, it’s used as a vehicle to bring Barry Allen back to life. Not a decision I agree with at all. Over the years, I really grew fond of Wally taking up the mantle of the Flash. It was a long process, but Wally finally lived up to the legacy, and yet…made it his own, as well.

But…getting so off topic here.

Once again, the Final Crisis’ story just seemed to be all over the place, with characters acting out of character. And concepts like Boss Dark Side and Super Young Team just seemed silly to me, and quite frankly, uninteresting. The storyline goes from being about Darkseid to having something to do with the Monitors. I’ve read it several times and still have no clue what’s going on.

Grant Morrison has a new book comic out about Santa Claus year one called, Klaus. From what I’ve seen in the previews, it’s like Santa Claus: The Barbarian. Or how Morrison describes it:

“Klaus is the story of our hero’s greatest challenge and how he overcame it. This is the tale of one man and his wolf against a totalitarian state and the ancient evil that sustains it. Part action thriller, part sword-and-sorcery, part romance, part science fiction, Klaus has given us free rein to revamp, reinvent and re-imagine a classic superhero for the 21st century. He’s making a list and he’s checking it twice. This Christmas it’s all about psychedelic shamanism, anti-authoritarian guerrilla gift-giving, and the jingle bells of freedom!”

I’m not sure what to think about that.

I understand that Morrison is trying to push the boundaries of comics. I hear the word “meta” throw around when it comes to his writing. But I feel that Morrison is to comic books as to what Wavelength is to film. Experimental, but still comic books. (If you’re not familiar with Wavelength, you can check it out here)

Either way, my mind hasn’t been changed. I just can’t understand why people think Morrison is this über author. I can think of a dozen authors that are better than Morrison, but…that’s just a matter of taste, I suppose. You might like him and you can have him. I just hope he stays out of the DC Universe.

So? My final assessment:

NOTE: Now you may not agree with me, and that’s OK. And you might feel the need to just leave a comment bashing me and leaving it at that. In all honesty, anyone can do that.

Take a larger risk and come onto the Fanboy Factor podcast where we can debate the pros and cons of Grant Morrison. If you are truly a fan of Grant Morrison then please come on a podcast and defend him. Nothing hostile or one-sided. An actual friendly debate.