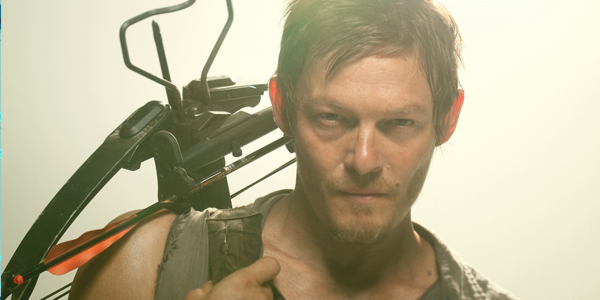 Norman Reedus is a bad ass guy. He’s been one of my favorite cinematic tough guys since he played Murphy MacManus in The Boondock Saints, and when I heard last year he had been cast in AMC’s TV series The Walking Dead, I knew right away it would be awesome. His character on the show, Daryl Dixon lived up to my expectations… Easily the meanest and toughest of the survivors we’ve met so far, the arrow-happy loner is one of the most compelling new characters introduced in the TV series.

I had the chance to chat with Norman about Series Two of The Walking Dead, which premieres on AMC. Check out what he had to say about where Daryl and the other survivors are heading this season, how he got the role, and what his favorite zombie was on the new season!
Daryl is a hunter, and a pretty hard kind of guy. He can solve problems but never deals well in social situations, not really knowing how to communicate with other people. Reedus says there is a child-like aspect to Daryl that he plays on– in the series Daryl is definitely the outsider of the group, with the other survivors either being scared of or downright disgusted by him. In the new season, though, Daryl will start getting a bit closer to some of the survivors… the younger Dixon brother will have more interactions with his fellow zombie-fighters, although who he gravitates toward are not the ones you’d necessarily expect. Like every other aspect of the show, the interactions here are more character-driven, but also need to have a sense of surprise. Reedus always envisioned a fight between Daryl and the group’s taskmaster Shane, but even though it seems they should butt heads it hasn’t happened yet.

Instead of antagonizing, Daryl will start to bond with some survivors through a shared kind of emotional damage… especially those with family issues. We will get to see the Dixon brothers’ backstory this season, and Norman hints that when the audience sees the sad and harsh origin of Daryl they will emulate with him much more. Also explained in his backstory will be Daryl’s reliance on and faithfulness to his pretty terrible older brother Merle. In spite of this rough early life, in the modern zombie post-apocalypse of the series, Daryl has found a place as someone very necessary to the group. They rely on him for his skills as a hunter and tracker, and his fearlessness against the hordes of the undead.

Some of the cast members, such as Sarah Wayne Callies who plays Lori,  have said they channel their real-life fear of the intricate and disgusting zombies created by makeup master Greg Nicotero and his team, but not Reedus– since Dixon is a hunter, he doesn’t view the zombies as a threat so much as prey to track and hunt down. Off set, however, Norman loves to check out the wild and terrifying makeup effects seen throughout the show. He also hinted we will see a “very elaborate” zombie during the middle of this season. While he didn’t want to talk about the context of this creature, he said it was “super-sized,” and had plenty of moving parts… that shouldn’t be moving.

But elaborate zombie effects aren’t the only thing we have to look forward to in the new season. The big question right now is, after the fallout between AMC and showrunner Frank Darabont, and a rough start to the new season behind the scenes, will the show be able to hold onto the quality storytelling and compelling characters from Season One? Norman thinks so– things stabilized quickly and the new set is working well. New showrunner Glen Mazzara was specifically chosen by Darabont before his departure, and Mazzara is dedicated to keeping the original vision intact and keeping up the same energy that charged the first six episodes, which is fantastic news since Season Two is heading toward some major characters being introduced, along with some big time story arcs from the comics that readers are dying to see. If anything, Reedus says the behind the scenes drama from this Summer brought the cast closer together as a group, and that bond really shows through in the characters. In a series all about a group needing to work together to survive, that’s the best news I can think of.