NOW YOU SEE ME Has Some Tricks Up Its Sleeve 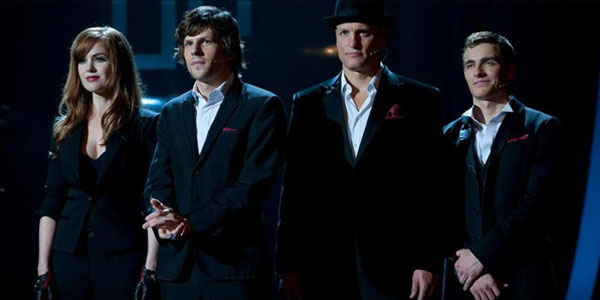 The hipster magic/ crime caper is not what it seems, but it’s still seriously fun and more than a little silly.

I didn’t know exactly what to expect from Now You See Me, but I assumed it would follow suit with other recent magician movies such as The Prestige, offering a look behind the curtain at both the tricks and the magicians… in the case of Now You See Me, I was only half right.  This is a movie that does, indeed, feature magicians who wrap daring big-money heists into their stage shows, but it’s definitely not a movie ABOUT them.

Instead of a crime caper, Now You See Me is more a detective story than crime caper, following Mark Ruffalo’s disheveled, perpetually annoyed FBI agent Dylan Rhodes, teamed up against his will with Interpol agent Alma Dray (an impossibly adorable Melanie Laurent).  The investigators make a good, stock pair of skeptic and believer, as they check out the scene left behind by the Four Horsemen, the foursome of street magicians turned professional performers (and criminals, apparently) by a mysterious benefactor.

The Four Horsemen are established early in the film, and we are given great intro scenes for each of them.  From Jesse Eisenberg’s Daniel Atlas, to Woody Harrelson’s psychic McKinney, Ilsa Fisher’s Henley Reeves, to Dave Franco’s Jack Wilder, each of the Horsemen gets a moment in the spotlight to display their considerable slight-of-hand skills, and we are given just enough of each character to know who they are.  Interestingly, after these glimpses into the magicians before they come together, we are closed off from them for much of the rest of the film– instead we follow them from the outside, along the increasingly frustrated Rhodes, incredulous that he’s being sent to run around in circles after a group of magicians.

Adding to the fun cat-and-mouse of the affair is Morgan Freeman’s slimy, pro magic debunker Thaddeus Bradley, and Michael Caine as Arthur Tressler, the Horsemen’s financier.  Both actors bring an air of classiness to the proceedings, and Freeman especially shines as the ex-magician, whose best trick is concealing his true motives as he bounces from case to case, and allegiance to allegiance.  If Dray is the believer and Rhodes the skeptic, Bradley is the cynic, an equally unique role in this world of magic and illusions.

The stage is set, as it were, as the Horsemen execute a trio of daring heists during their live magic performances.  They keep none of the money– it all goes to their audiences– making them all instant celebrities channeling a Robin Hood vibe amidst their shows.  As for the illusions themselves, all of them make for quite thrilling sequences.  Much of the magic in this movie is practical, and keeping things grounded and away from the supernatural world works to the film’s credit.  There’s a number of “wow” factor moments in this movie, and they tend to come from both the Horsemen’s performances… AND afterwards, as Bradley, Rhodes and Dray disassemble the tricks and learns how they really worked.

Director Louis Leterrier channels a fantastic energy, especially around the increasingly popular Horsemen appearances.  His camera never stays put, and he employs many tricks of the trade seen in actual stage magician performances, with lots of sweeping crane shots and full circle pans.  Despite the high energy, Leterrier keeps a consistent pace and never lets his enthusiasm get in the way of clear, well-paced storytelling.  I’m not sure magic has ever looked this “hip” in a movie– there’s a line of dialogue early in the movie poking fun at the typically uncool profession, which I found myself agreeing with less and less as Now You See Me plays out.  By their final act on a rooftop in New York City, it no longer seemed strange that these droves of young, attractive people would have adopted the Horsemen so openly– they’re pretty damn cool!

There’s quite a few twists and misdirections in the final act of this movie, and I’m not going to spoil them.  We get some mumbo jumbo about an ancient Egyptian sect of tricksters called “The Eye” that threatened to derail the refreshingly non-mystical proceedings, but things work out okay.  It all leads to the BIG twist, which I’m still not entirely sure works.  By the time it plays out, though, even a dumb plot twist like this pales in comparison to the undeniable fun on screen, and I was more than happy to surrender to the movie’s charms instead of focusing on the cards that just fell out of its sleeve.  I loved that we can be thrilled watching as these elaborate magic trick heists unfold, while simultaneously dissecting them to see how they really happened, with an equal attention and passion paid to both sides of the stage.  In that respect, Now You See Me offers a great bit of enjoyment, whether you’re a skeptic or a believer, and that balancing act may be the film’s best trick of all.