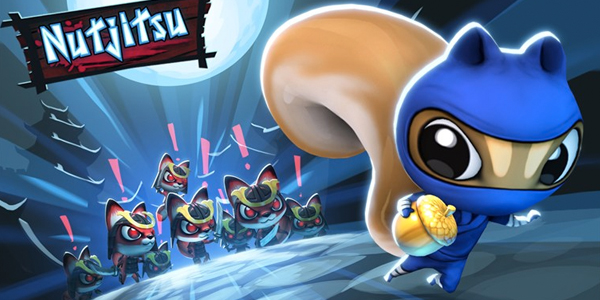 Having produced a number of quality titles published for Xbox 360/XBLA including Outpost Kaloki X,Cloning Cylde, and Band of Bugs, it’s no surprise that Utah-based developer NinjaBee was quick to show up in Xbox One’s indie scene via the ID@Xbox program.  Priced at a mere $6.49, Nutjitsu clearly aims to fill the niche of simple, casual games which are largely absent from the next-gen system’s current catalogue.

The story is succinct enough – the kitsune have stolen your clan’s sacred relics and only you, a ninja squirrel, can retrieve them.  With an array of tools and weaponry at your disposal, you must infiltrate enemy territory and take back your treasures.  What this essentially boils down to is an experience not unlike Pac-Man, with a bit of stealth mechanics worked in for good measure.  Each of the 15 unique, hand-painted backdrops serves as a maze of corridors which are patrolled endlessly by samurai foxes.  In classic Pac-Man style, the enemy movements can be unpredictable and avoiding them can require quick thinking and twitch reflexes as you try to remain out of sight while collecting randomly spawned collectibles like colored acorns and scrolls.  While the basic mechanics are similar to the arcade classic however, there are notable differences in Nutjitsu’s execution – namely, the environments are asymmetrical, which navigation a bit trickier in comparison.  The protagonist’s movement must also be controlled every step of the way, as your squirrel will not continue in the designated direction unless that direction is held.  Due to the stealth nature of the title, this allows the character to stay and hide in one place, waiting for an opportunity to dash towards the next objective. 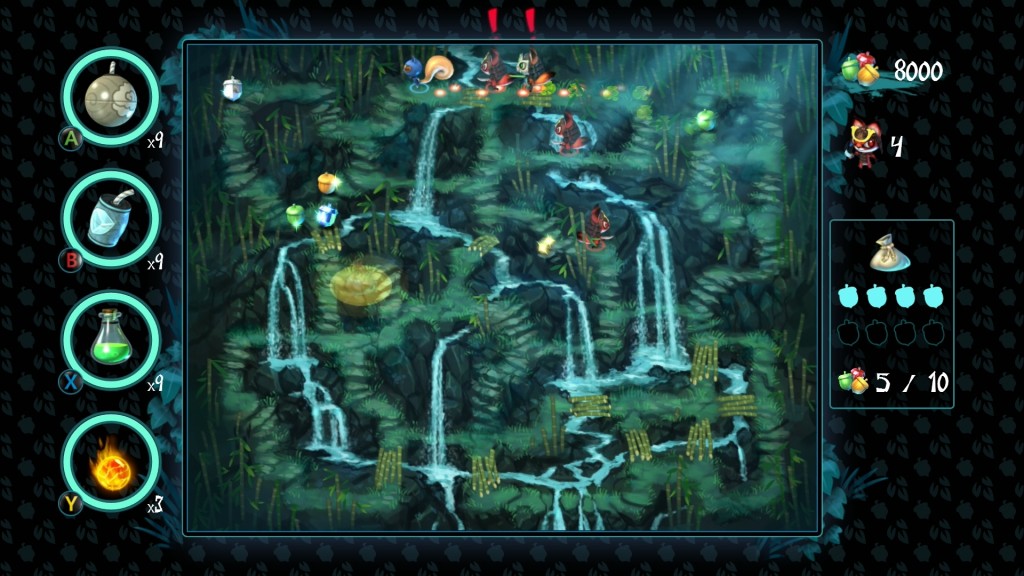 These objectives are dependent of which mission type you’ve chosen for the selected level.  While the missions don’t vary greatly from one another, they can offer a subtle change in tactics.  Acorn or Scroll collecting objectives will task you with grabbing a pre-determined number of sparkling acorn gems.  This will sometimes involve collecting enough of a specific color of acorn, which is time-based and will shuffle the needed color throughout the match.  Collect & Deliver missions are similar as you will still be collecting acorns, but can only hold a certain number of them at once, meaning that you must visit a bag which can randomly spawn in the environment to drop off your stash and free up room to collect more.  Lastly, some missions will require you to occupy a small “magic area” of the environment for a set number of seconds.  The timer counts down while touching this highlighted section, but the target area will continually disappear and open up in a new location.  There is also a selectable Survival Mode from the main screen that forgoes any selectable missions to simply see how long you can survive one map while collecting as many relics as you can. 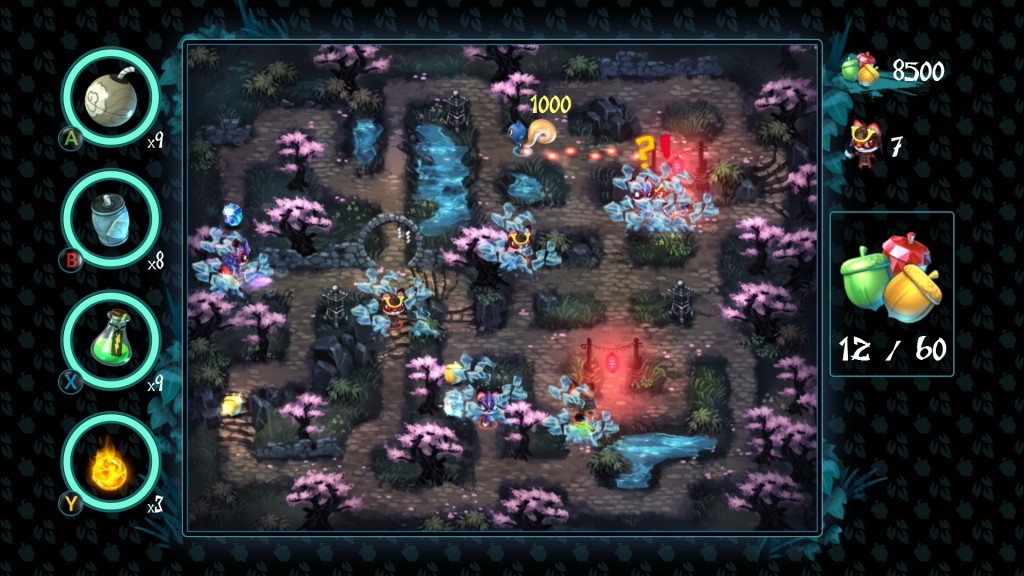 There to hamper your progress, the enemy fox presence will increase as you progress through your goals, making each level increasingly more difficult as you near completion.  The three classes of kitsune you will face are hunters, trappers, and dashers.  Hunters are the average grunt class which will simply comb the environment and give chase if you fall into their field of view.  Trappers and dashers are a bit more interesting.  The former leaves a short trail of poison behind him as he walks which will slow you if you happen to touch it.  The latter sprints from cover to cover and is able to traverse the map quickly, however they briefly display an arrow showing the direction they’re about to run to so players can try to plan around them.  As you rank up by completing missions and collecting items, new items become available for purchase with earned in-game credits.  These items are extremely powerful and allow you take on some of the most difficult challenges.  Each mission has a selectable difficulty that range from very easy to extremely hard with XP rewards that make the challenge worth the effort.  The unlockable inventory items consist of smoke bombs, speed potions, freeze bombs, shadow clones, and flame shields, all of which grant powers that allow you to blow past enemies and get through a level with ease, but their cost ensures that they be used sparingly. 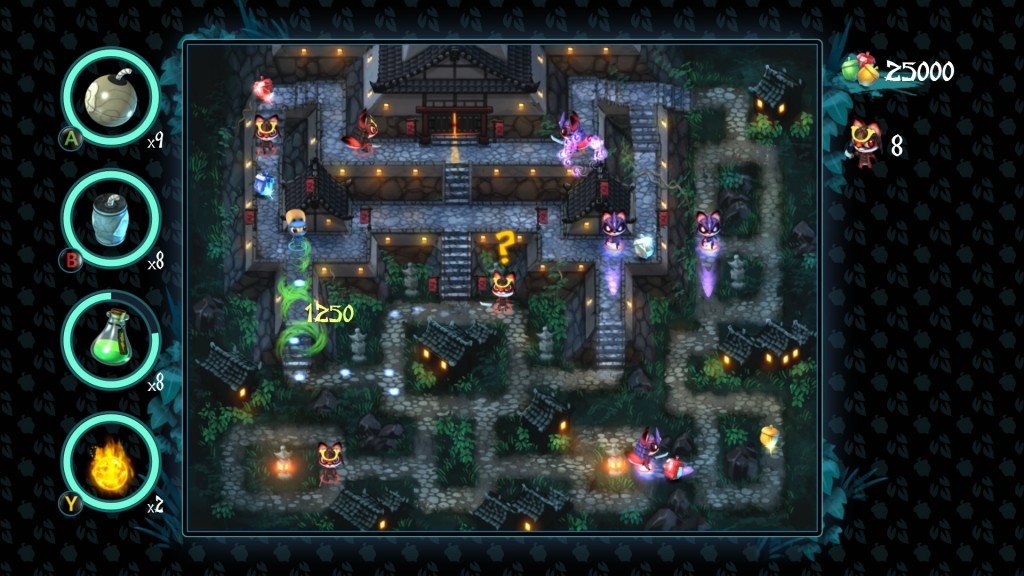 Nutjitsu does have a few rough edges though.  The title was previously available as a free download on Windows 8 Mobile platforms and its origins as a touchscreen app are often apparent.  The visuals, while vibrantly colored and adorable, aren’t exactly what you’d expect on a next-gen system, even from an indie title.  Far too much of the screen is lost to negative space in gameplay and menu browsing alike.  Instead of a clean, minimalist feel, it simply comes off looking somewhat unfinished.  The sound design too could benefit from some attention.  While serviceable, the effects are certainly lacking, with only a handful of chirps and chimes are used for audio cues.  One sound in particular, the odd whimper sound employed when a fox spots you, doubles as the effect that plays immediately upon finishing a level – only it blares out a three times the volume of anything else.  I actually wince as I’m about to complete the objective set because I know what’s about to scream out of my sound system.  My main issue though, is that there’s no real sense of progression through the game.  You can level up and unlock items, but there’s no tangible evidence that you are actually progressing through the game – previously played levels don’t even display which difficulty modes you have bested.  Once you finish an area, you are simply presented with new random areas to play infinitely. 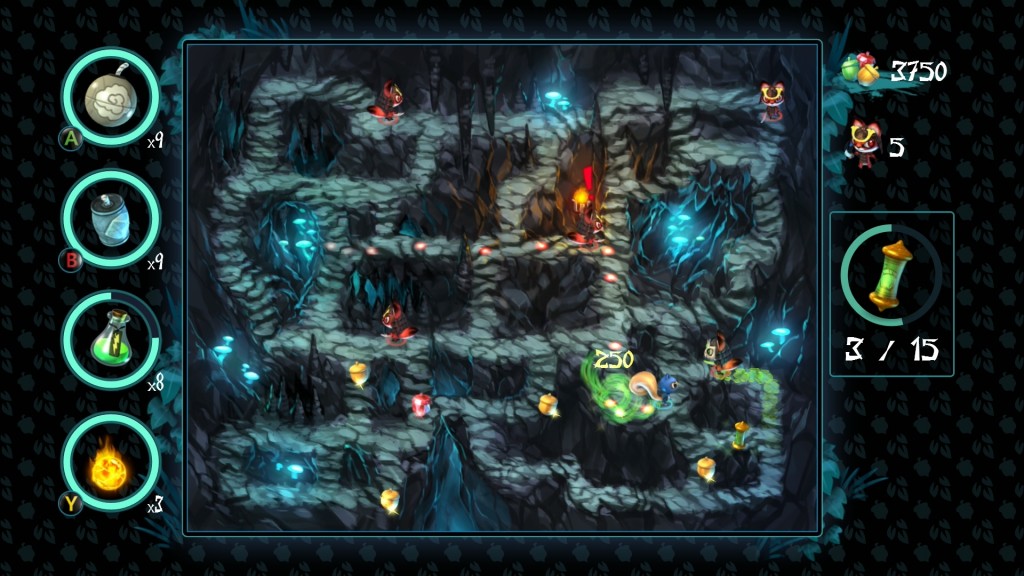 That said, unlike the indie titles offered on Xbox 360, ID@Xbox games support achievements and achievement hunters will be happy that Nutjitsu its generous with handing out its 1000 points for a relatively short investment of time.  Other than that, as I’ve said, it’s a niche game that fills a void on the Xbox One in that it’s simple, inexpensive, and plays quick.  It’s great for kids or casual gamers looking to kill some time with a fun diversion and boost their gamerscore in the process; just don’t expect anything more than a straight port of a mobile title and you won’t be disappointed.