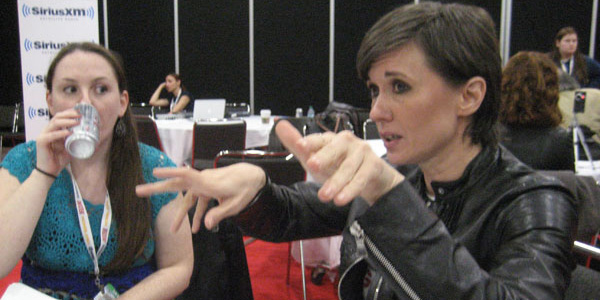 One of the most haunting and iconic moments of Carrie— in any version of Stephen King’s classic— is the blood dropping scene, as our protagonist is doused in pig’s blood and publically humiliated in front of her entire class at Prom.  At New York Comic Con, director Kimberly Peirce and Carrie herself, Chloe Grace Moretz discussed how they captured the infamous scene on film in the new adaptation.
For Kimberly Peirce, the ultimate goal of portraying the infamous blood scene at the end of the movie was simple practicality. “Most of the time the blood misses,” she admitted. “It took forever to finally get it right.”

The first goal was that the blood hit its target, which was the subject of extensive research.  Different thicknesses and volume of fake blood were all exhaustively tested, as well as how high the blood should fall from.  Once those technicalities were ironed out, Peirce says they also had to ensure the blood would pour beautifully. “The human head is an umbrella,” she explained during the press roundtables at New York Comic Con. “I needed it to go over her face.”

Of course, there were more than technical aspects to look at, especially in a character piece like Carrie. “You had to be at the height of the perfect dream,” the director explained. “Everything had to be going right for Carrie– she was falling love, she had won prom queen, she was up there with all these people who had tortured her and laughed at her. She had to be the highest, and you had to take her in one second– you had to flip. If you didn’t feel that, I had failed.”

Chloe Grace Moretz felt marrying the technial and character elements was the only way to really nail the notorious sequence.  Fortunately for her, the film’s star only had to get doused in blood herself for two days, despite over 70 test runs beforeheand. Moretz only had two shots to nail the scene, and she wanted a genuine sense of surprise caught on film. “I didn’t want to be told when the blood was dropping,” she explained. “I wanted it just to happen.”

Doused in cold blood, Moretz admits she felt the same shock and humiliation her character did, which she wanted to channel on camera. “I look out, I see the audience, and you’re living it,” recalled the actress. “They’re there, and they’re laughing at you, and you’re crying because you’re living it… because you look like an idiot.”

“It’s that embarassing moment when you feel awesome, and you’re in the cutest dress, then you fall and everyone’s laughing at you,” she continued.  “And you’re like ‘It’s not funny!'”