NYCC 2012: Change Is Everything When It Comes To The Walking Dead 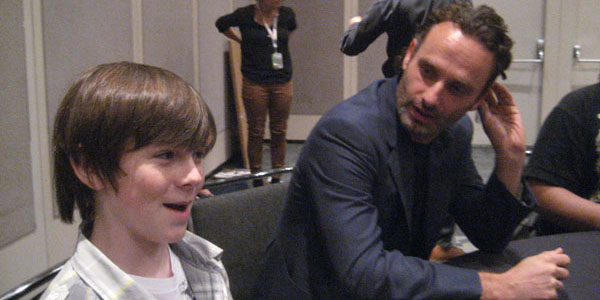 The Walking Dead kicked off its third season last Sunday, with a thrilling reintroduction to the cast of survivors trying to make their way through the zombie apocalypse.  Judging by the comic book, Season Three promises to see plenty of mind-blowing moments, as the entire world of Rick Grimes and his people is about to get blown wide open, just after they find their first real safe haven.

“I made the fateful error of going to the writer’s room and saying what do you think Rick’s breaking point is?” said series star Andrew Lincoln at New York Comic Con.  Lincoln, who plays sheriff-turned-group leader Rick Grimes on the AMC series, continued “We find out this season. It’s a great journey that I’ve got this season.”

For fans of the show so far, it should come as no surprise that Rick is darker and more isolated after the shocking events last season, but Lincoln insists all the characters have changed, which he feels is kind of the entire point of the show. “This is all about change, the whole story is about people changing,” he explained. “If you don’t change, you die.”

Chandler Riggs, who plays Rick’s son Carl, agrees with his on-screen Dad.  “You have to grow into this world, or you will die. Look at Sophia,” said Chandler. Seeing Carl take down Shane when he resurrected as a walker was a wakeup call for Rick, letting him know his son is ready. “He’s becoming a very vital, and necessary soldier,” said Lincoln of the young boy.  Chandler loves the dynamic of playing a boy growing up too early due to these impossible circumstances. “I get to play two different characters,” he said. “From the crying kid in the background in Season One, to almost this sidekick.”  The young actor has impressed everyone on his accomplished cast. “[There’s] no more ‘Get in the house, Carl.’ We’ve retired that line,” joked producer Gale Anne Hurd. “Carl burns down the house. He’s awesome,” added Norman Reedus, who plays Daryl. 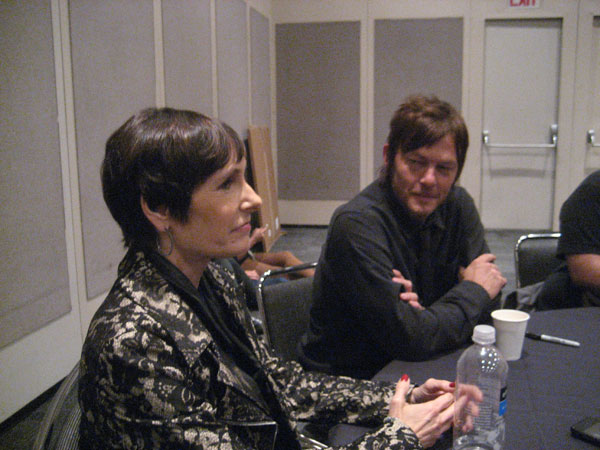 The show’s infamously high body count also helps to keep things fresh. “You kill off key characters, and then the group dynamic changes and the show sort of reinvents itself,” said Lincoln. “Other people step forward and you learn more about them, and they change, as well.”

One of the biggest changes seen so far is the new environment Rick and his group have discovered– a prison, whose fortified walls he hopes will keep his people safe. The new season began with a jump forward in time, which Lincoln believes was critical in their discovery of the prison– if they found it at the very end of Season two, the survivors wouldn’t have had it in them to respond with any excitement. “We would never have attempted [taking the prison]. We were too broken, too disparate, we were too disorganized and too distrustful of Rick’s leadership,” he said. “we’ve become this one organism– breathing, listening, working together. When we see the prison Rick goes ‘This is it. This is the citadel.’ He sees the future, and says this could be a viable place.”

Not all change is for the positive, as Lincoln admits Rick is becoming changed by this world… not unlike his recently deceased friend Shane. “In [Episode] Two, you see there’s an uncompromising brutality that is very much an immediate decision-making, that is very much the Shane camp.”

Rick’s strained relationship with his wife Lori is also shifting based on the events of last season. “Sarah [Callies] and I made a conscious decision not to look at each other for the first few episodes, until something happens.” Lincoln explained.  The actor doesn’t doubt that both Rick and Lori still love each other deeply, but they are in an unfathomably terrible place right now.  Were they not living through this zombie apocalypse, they would likely get a divorce, but being among the last human beings alive they both understand a value in their bond.

Lori, for her part, is trying to give Rick space, despite the literal potential time bomb of the child she’s carrying. “Every time I look at her it burns. Shane. Guilt. That’s why I made a conscious decision not to make any eye contact with her, because I can’t,” Lincoln admitted.  Airing all this dirty laundry seemed to be the only way to move forward, for Rick to keep the group’s needs ahead of his own. “The rage is all there,” he said of Rick’s pain. “He’s not willing to combust and implode… he’s able to suck it up and let it poison him, rather than risk the group.”

The sense of evolution is just as important behind the scenes, as Hurd recalls another rocky journey to the finished episodes. “Nothing is easy about this show,” she said, as each production has been a different challenge. Season Three’s biggest obstacle has been the huge new sets, two locations and a larger cast of characters.  The shock of this really kicks in with Episode Three, which will not feature major players like Rick or Daryl, instead focusing exclusively on the Governor and his all-new camp of characters at Woodbury. “It hasn’t changed out world,” hinted Reedus of the new additions. “There’s another group of stories that are in our world, as well.”

Fans of the comic know that it’s only a matter of time before the two camps come face to face, and everyone is very excited to see this standoff play out on screen.  “This season is very much about a clash of worlds, and men, and camps,” said Lincoln. Hurd added “We’re building to something rather epic-proportioned,” clearly implying that the TV series would be following the comic book’s path as Rick’s survivors and the people of Woodbury begin to build to war. 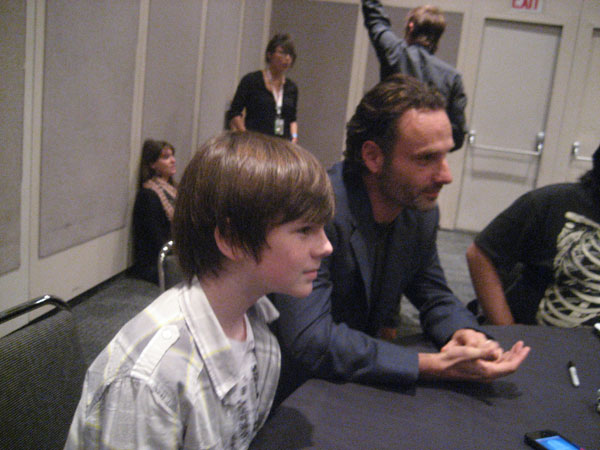 Check back next week for more from the cast of The Walking Dead at New York Comic Con!