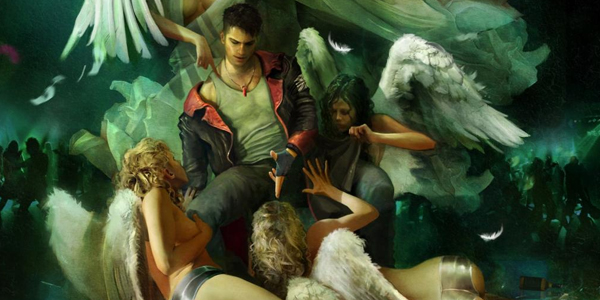 Following Capcom’s panel highlighting the surprisingly impressive Lost Planet 3, the room quickly filled with gamers clamoring to get a glimpse of the much maligned re-imagining of Devil May Cry, now simply marketed as DmC. Similar to Bioware’s open panel discussions subsequent to Mass Effect 3’s launch though, the online fervor was nowhere to be found, replaced instead by loyal fans (or fanboys, depending on your perspective).

I had the rare opportunity to be neutral on this issue, which originated from the decision to reboot the series with a very different aesthetic – specifically a drastic change to the iconic lead character, Dante, as I’ve never been particularly invested in the series enough to get bent out of shape over the news.  On one hand, after several sequels, the series had become a bit stale, and a reboot could be a great way to market the game to a new audience.  On the other, it’s totally understandable that gamers who have been invested in the series (and its characters) for over a decade would see this as ludicrously unnecessary – like rebooting, say, Robocop.  Now, after seeing Capcom’s presentation, coupled with the attending fans’ reactions, alongside footage of the finished product, I can at least see what they were going for, even if I’m still not completely sold on the project. 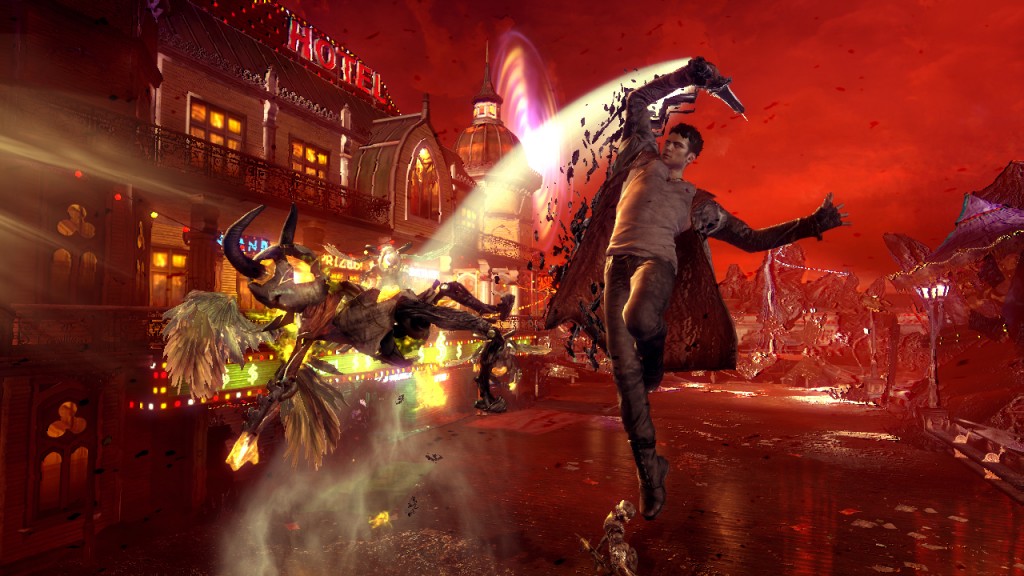 Before really getting into the new look of Dante, senior producer Alex Jones and Dominic Matthews from developer Ninja Theory began discussing the ideas behind the relaunch.  They wanted DmC to have a decidedly western appeal, free of the flamboyant and sometimes caricaturish Japanese design influence.  They wanted to pinpoint “what is cool” and re-invent Dante in the same spirit, advising the audience to imagine him as if he were a hero in a Hollywood movie.  This was then followed by a heavy-handed slideshow outlining the many differences between Japanese and American culture, fashion, film, and music, just in the off chance that someone in the audience was perhaps experiencing the world for the first time.  That said, the “rebellious” redesign of Dante that supposedly “defines cool” is pretty underwhelming.  In fact, he looks and acts like a complete douchebag.  Again, I’m not that passionate on this issue one way or the other and certainly don’t think it’s worth sending death threats to the publisher over, but I have to agree that the dashing, wisecracking, badass Dante I’m used to will be missed.  There’s just something about the redesign that rubbed me the wrong way — perhaps it’s that he looks like a the frontman from a generic radiorock band crossed with the bland demeanor of a twilight vampire.  By going out of their way to extract all Eastern influence from the game, they robbed it of its signature style. 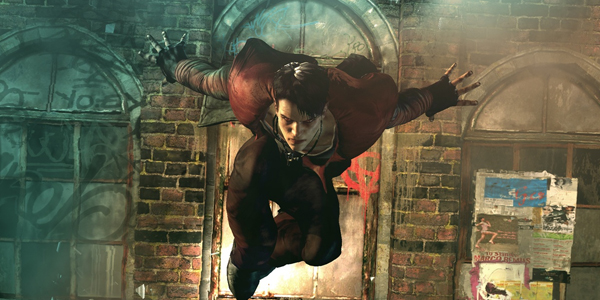 The female panel attendees disagreed however, and the new footage (featuring a rather long sequence of Dante completely nude, with his naughty bits barely covered) was greeted with plenty of hoots and hollers from the fairer sex.  As I sat there, surrounded by a group of young girls commenting about how attractive Dante was, I realized perhaps I wasn’t the target market for this title.  I have to say it was actually pretty refreshing to see women react in the same way that, up to this point, I had only seen displayed in prepubescent male losers of the gaming community.  The devs were then quick to point out that they are well aware of DmC’s rabid female fanbase, so kudos to Ninja Theory for catering to the ladies on this one — even if means dragging the series into mind-numbingly inane teeny-bopper territory. 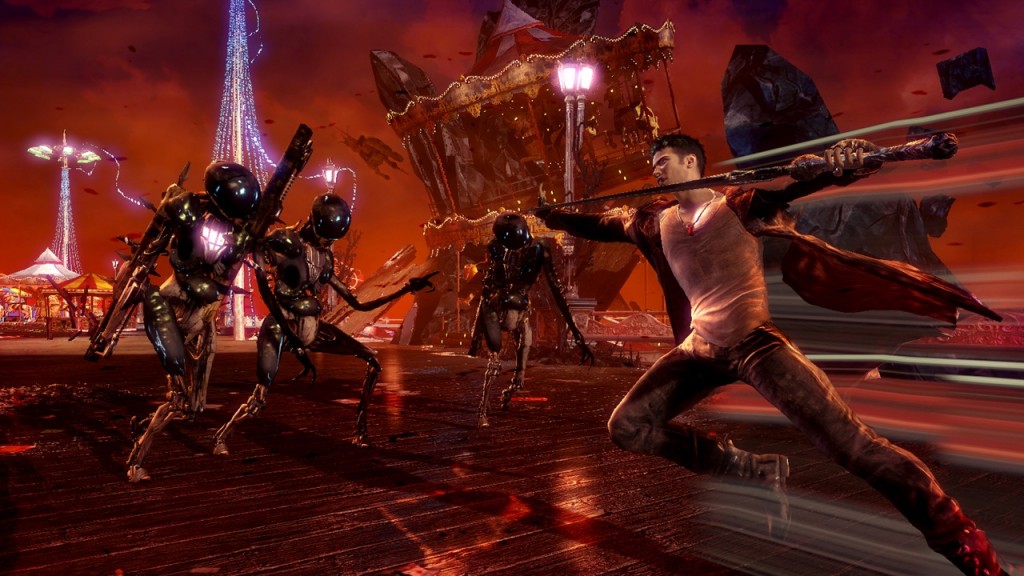 Okay, so after Dante got some clothes on, we were ready to see some gameplay footage.  Set in the modern world, the demonic forces who occupy in Limbo (a twisted alternate dimension that mirrors our reality) will stop at nothing to enter our realm, intending to destroy our hero.  “Malice” was the name given to the sentient deformities in the real world that appear as the demons cross over to our dimension.  It was certainly interesting to see environments crumble and decay, giving way to enemies for Dante to confront.  Seeing the ensuing combat in action was classic Devil May Cry through and through — crazy combo strings, twin handguns, large swords and scythes…it all made for a familiar experience.  Even though Dante’s appearance has changed, the series at least still maintains the most stylish fighting engine around as Dante employs both angelic and demonic powers seamlessly and fluidly in his combos.  These powers, such as a large grappling hook-like extension of Dante’s hand, can be used in combat and out — whether to pull enemies toward you or swing around the area Spider-Man style with some light platforming elements.  Like the previous games in the series, the actual gameplay looks to be great fun, regardless of how you feel about the aesthetics, and will host a number of difficulty options that make the title accessible to newbies as well as hardened DmC veterans. 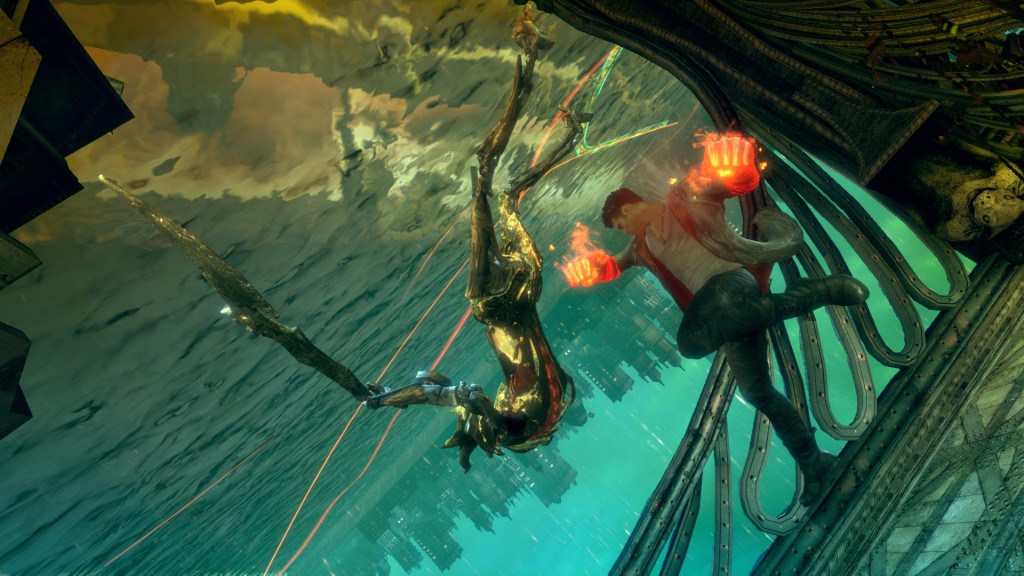 For the first time in the franchise’s history, they’re using established bands for the game’s score – especially the portions that take place over the action sequences.  The obnoxiously generic tunes we had been hearing over some otherwise fun gameplay turned out to be none other than Combichrist, the lowest common denominator of the industrial scene (the fact that the game’s producer then referred to them as a hard punk band was just facepalm-worthy); further proof that they’re shooting for a younger, and decidedly lamer, target audience.  It was also announced at NYCC for the first time that the Demon King, Mundus, will be the main villain of the game, controlling the human world subversively through banks, media, and corporate entities.  The “evil corporations” story device has been done to death, especially lately, so here’s hoping they downplay that angle a bit.

The floor was then opened up to an embarrassing Q&A where fans touted their general lack of knowledge of the developer/publisher relationship, ignorance that Ninja Theory and Team Ninja are two completely different entities, and their penchant for wasting everyone’s time with thought-provoking non-questions like “Dante is hot,” “…Someone else already asked my question,” and “Will there be girls in this game?”  But I digress — if I start pointing out the rampant stupidity of children at Comic Con we’ll be here all day.  DmC is in the final phases of production and is currently slated for a January 2013 release date.  I’ll reserve judgement for the game as a whole until I’m able to get some hands-on time with it.