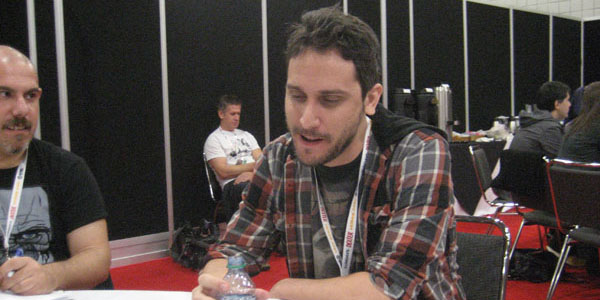 Everyone knows remakes can be a bad idea, but the creators of the new Evil Dead believe they have side-stepped the pitfalls of lousy reboots, to come up with a new story worth telling.
Evil Dead‘s director Fede Alvarez admitted at New York Comic Con he was scared when he started on such a daunting project as retelling the Sam Raimi classic. But he was quick to admit, he’s a diehard fan of the series himself, and that gave him confidence. “As a fan, when I have a property that I love, some saga that I love, and somebody is about to give me something new, that is good… there is nothing more exciting.”

He does realize what a fine line pulling off a remake of a classic can be. “We’ve all been burned so badly, you go ‘No don’t do that to me!’ The magic about movies is, they’re not [just] manmade. It’s not being made by somebody sitting at a table going ‘What should happen next?’ It just feels like this magic thing that happened is there,” he explained. “So when we see a bad version of it, or a bad remake or a bad sequel… suddenly the whole fantasy of that is affected by the bastard brother [of the original]. We put a lot of pressure on ourselves to try and make it good.”

Alvarez believes having original producers Raimi, Bruce Campbell and Rob Tapert. “On bad remakes of the past, sometimes you cannot blame the filmmakers because in a lot of those remakes we saw of classic films from the 80s– those movie are owned by the big studios. The original filmmakers has no involvement in that anymore. Bruce, Sam and Rob Tapert, they own [Evil Dead], and they have the freedom to do whatever they want with it,” he said. “That’s why it’s  a completely different story. It’s them sitting with me going ‘Let’s do this, let’s try that.’ There’s no studio blocking shit, there’s no ‘Let’s make it PG-13.’ Our movie right now is NC-17, we’re gonna have to try to trim it here and there to make it R, because it’s out of control. There’s no controlling, there’s no fear, because we have none.”

Campbell was on the same page, stating that one of the things that makes their new movie work is making sure it stays it’s own story, it’s own beast. “Fede made it all his own,” the actor/ producer asserted. “As producers, we have not exploited this whatsoever,” Campbell continued, discussing the difference between his franchise and other exploited horror icons like Jason, Freddy and Leatherface. “I hope that fans realize we are being very loyal to them, and we appreciate their violent loyalty to us. We don’t wanna break that trust.” 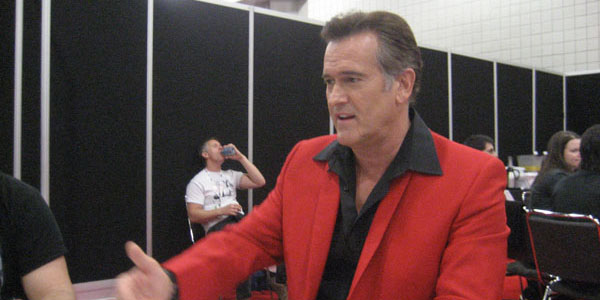 Along with a fresh take, it was just as important for Alvarez to make sure he put his own visual style on his movie, instead of copying the signature styles Raimi employed in the original. “Every time I was doing a shot that reminded me of the original, I felt soulless and depressed,” he recalled. “I was like ‘I cannot do this, why am I doing this?’ and I would just stop and think again and do it a different way. The tools that we have today are different from what they had– they had a piece of wood, and the camera there– we have a little more technology these days. But I didn’t want to approach it that way. It’s very raw in the way we shot it. Half of the movie is just hand-held and in your face. It’s just a reactive camera to what’s going on, to make it very raw and very realistic.  And suddenly the camera would just stop– there’s a moment where the camera is handheld and you will turn around and suddenly it’s going to lock and go very steady because there’s a supernatural element. When we’re shooting supernatural, and the Necroniomicon is on the table, suddenly everything is different, steadier.”

There will be some references to the original, but the creators made sure these nods remain unobtrusive. “I hit a lot of clear things– the camera will drop in some point,” said Alvarez. “New audiences will go ‘It looks great,’ [but] a very small audience will see the similarities between the two. That was the scariest part… the way I shot things are so different from how that movie was shot, there was no way it was going to be touching too much, but it does in some points– it’s not the points I enjoyed the most.”  This is the same reason Campbell is staying behind the camera for the new movie. “We realized it would be a horrible distraction if I was the guy at the ice cream shop,” stated Campbell. “Not appropriate.”  So Ash will be miles away from the new Evil Dead… although Bruce did admit we might see a familiar Delta 88 somewhere on screen, a ringing endorsement of the film by Raimi if ever there was one.

Instead of on-screen chaos, Campbell is ready for some real-life drama behind the scenes, as he and his co-creators will likely butt heads with the MPAA over rating of their uncompromising movie. It’s not really something the franchise has faced before. “The first two Evil Dead movies went around the MPAA and when it came to Army of  Darkness, c’mon folks– it has talking skeletons. That’s not NC-17. You chop their heads off and dust comes out.” He cited Goodfellas‘ intense violence as an example of how mainstream movies get a pass whereas genre films are scrutinized much closer, a trend he doesn’t appreciate.

“Dear MPAA– you suck so bad, you have no idea,” Campbell said. “[Goodfellas] is historically accurate? OK, well maybe there was a demon that ate everybody’s face off and they didn’t know about it? Maybe that’s historically accurate. They’re gonna be, I think, antagonistic [to us] because we shot them the bird, two out of three times. We asked them with Army of Darkness, what would you cut out? [They said] it’s the cumulative effect. Well, why don’t you eat it? Seriously.”

Campbell’s snarky passion makes it seem he’ll fight the good fight, and Alvarez summarized his approach to retelling the Evil Dead with the best attitude possible, likening a great remake to a great cover song, which often avoids staying beat-for-beat and finds something new with the source material. “It’s just like playing a cover song– some bands would just play the cover, and those are the bands that play in the bar and suck,’ he said. “They make it sound just the same. Then there’s some people that take a song that maybe you don’t even like, and they turn it into something that makes you go ‘This song actually has good lyrics.’ That’s what we did with a lot of the things [in the movie]– it’s a new version, its a cover song of that. So let’s try to make it different and for a new audience.”

“Of course there’s some chords here and there, some notes that sound exactly like the original,” he continued. “But it