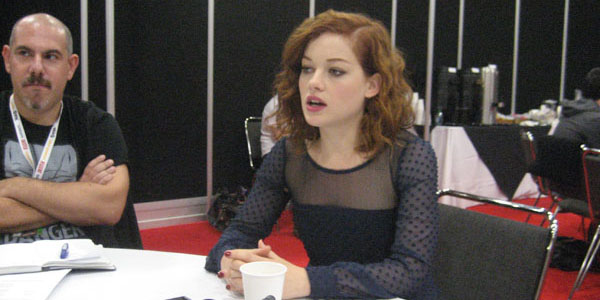 Jane Levy, the new star of Evil Dead, is a newcomer to horror– as an actor and as a fan– and she takes an entirely different approach to making the new protagonist, Mia, a unique character.
The original Evil Dead movies were anchored by Bruce Campbell’s iconic hero Ash, but the new movie hitting theaters next Spring will introduce fans to a brand-new lead, Jane Levy’s Mia. Don’t expect Mia to be any kind of “Ash-light,” as the new character is very much her own thing.

Levy, who stars in ABC’s sitcom Suburgatory, talked all about her Evil Dead character at New York Comic Con, where she also admitted she’s far from a horror fan.  The actress has only seen the first Evil Dead, and only after she was cast in the remake. “I thought it was a great movie,” she recalled. “I thought Sam Raimi proved himself to be a promising young filmmaker. I wasn’t amused– I was definitely scared– but I just knew we were making something else. I took things here and there from the original, but mostly we’re making a new movie. It’s the same people behind it, so I trusted them.”

The young actress didn’t take the original movie, or its iconic hero, into consideration when she approached the role. This meant she didn’t feel any pressure to make Mia as instantly iconic as Ash, allowing her to grow more organically. “I’m not playing Ash,” she stated. “The script was written the way it was written, and I just followed the text. If I worry about expectations… even if I wasn’t doing a remake, I’m not gonna think about what people aren’t gonna like, or what people are gonna think is missing, or I’ll just drive myself crazy.”

Bruce Campbell feels no hesitation about passing the torch to his successor. “I don’t know anything about anything,  but that chick’s gonna work,” he said of Levy. “She brought it– if I have to crown her the new Ash personally, I will do it myself. People just gotta chill out. Don’t worry about Ash, Ash will be fine. Sam wants to preserve Ash, too– we may do an Evil Dead 4. but it’s not like these movies are easy to make, and its not like any of us are getting any younger. People should have anticipation, so we want to give them a little something. And that little something is a new telling of the story, done really well by [director] Fede [Alvarez].” 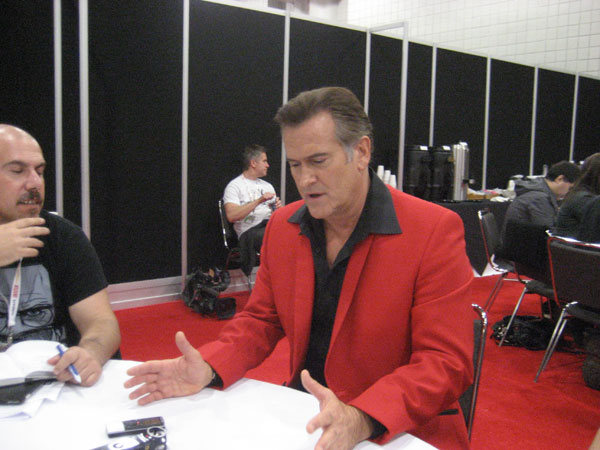 Mia starts off the film in a dark place, addicted to heroin, and she has decided to go cold turkey in the isolated cabin, with the people closest to her there for support. “From the beginning, it’s really a story about Mia’s survival– survival from her own demons, and then survival from the actual demons,” Levy said. The actress doesn’t do drugs in real life, so to play an addict, she had to interpret what her character was going through to something she herself could understand. “Everyone has their addictions, everyone knows what it feels like to feel alone,” she said, before admitting some of the terror on screen probably isn’t acting. “I was so fucking scared. I was really, really scared. The script itself is like, colossal, and so violent and so extreme.”  Levy felt the movie’s grim outlook made it very heavy, but in the end she trusted the confident direction of Alvarez. “Fede has created a really beautiful world, the film looks amazing. I just had to trust them, because it’s really their movie.”

For inspiration, the actress looked up the best villains in movies– the likes of Denis Hopper in Blue Velvet or Anthony Hopkins in Silence of the Lambs– to understand what made them so chilling. “The addiction thing– you see Mia for a split second, going cold turkey– it’s paranoia and physical unrest… that’s not so hard,” she explained. “I think what’s the most daunting was being a villain.”  Makeup and movement coaches added to the overall effect as well, especially when it came to playing possessed. “I don’t think people are gonna want to be my friend anymore,” she joked of filming the possession scenes. “The things that came out of my mouth were so shameful.” Levy’s background as a dancer helped during the demoic sequences, but playing a demonic creature was still a painful challenge.

Levy learned a lot for her crash course in horror, and applied the right mentality to what makes a villain truly scary. “Something I learned about watching old horror films is, they were usually about outcasts in society, and them sort of getting revenge,” she explained. “There’s a definite element to that in this movie. If your an addict, I think you definitely feel outside of something… like you belong. [When] people aren’t helping Mia in the way that she wants to be helped, there might be a little bit of revenge. And it’s not coming from her, it’s coming from a different force– maybe from the devil.”

Campbell is absolutely convinced he, Raimi and Alvarez found the right stars. “This movie is just done better than most of the average horror movies out there– not because we’re geniuses, but because we found two geniuses,” he said of Levy and Alvarez. “[They] not only didn’t screw it up, they made it they’re own beast.”

Levy admitted Evil Dead was a harrowing production, and while she’s not in a hurry to make another horror film anytime soon, she’s definitely on board for more Evil Dead.  “She’s still talking to us,” said Campbell. “It was the most horrible experience ever in her entire life when she did this movie, and I was so glad to hear that. Because it meant that character went through Hell, and the audience loves it when characters go through Hell.” 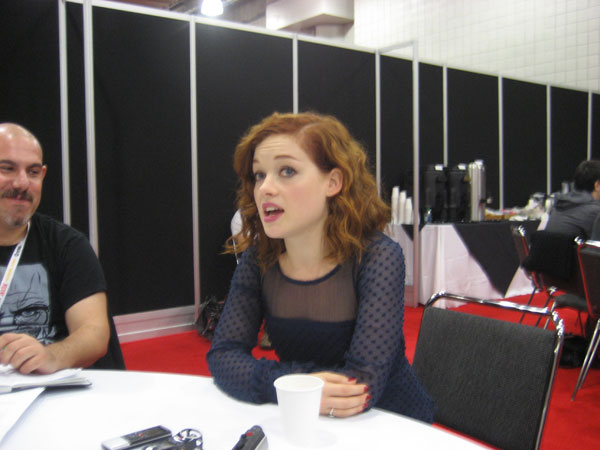 Check back tomorrow for more from Evil Dead at NYCC, as the creators discuss why they didn’t make a funny movie.