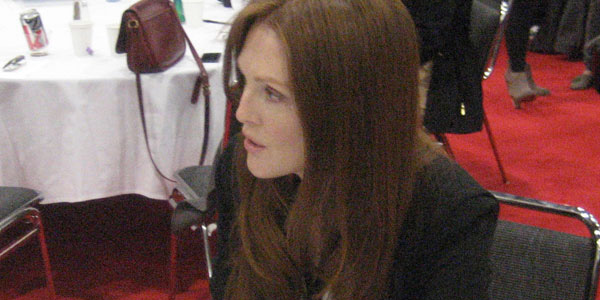 The new Carrie hits theaters next Spring, and Julianne Moore, who plays Carrie’s troubled mother, talked about what she wants to bring to the iconic Stephen King tale.  For Moore, it’s all about finding humanity in the monstrous Margaret.
Both Julianne Moore and director Kimberly Peirce wanted to emphasize a sense of humanity in Carrie’s mother Margaret, but this doesn’t mean she’s going to be a very nice person. “I don’t think this Margaret is going to be not scary,” explained Moore at the New York Comic Con roundtables. “It would be impossible to not be scary as this character. Every time you encounter a parent that’s out of control, I think it’s terrifying.”

Peirce was adamant about creating empathy for Margaret, despite– or even because of– her very severe problems. “We couldn’t go super-broad with this character,” she recalled. “We had to find the reality in her.”  The director and Moore both mined the vague description of Margaret’s background, and the religion she created.  Margaret needed to be a real woman, and her relationship with religion, and with her daughter had to make sense and not be taken lightly. “One of the things I thought was interesting about the character is, she had joined a religious sect when she was very young, found the sect was not rigorous enough, and peeled off with this man that she met and they became their own church,” explained Moore.

Margaret became so isolated she didn’t even understand she was pregnant, thinking she had been stricken with cancer. Her husband died, so she gave birth and raised Carrie alone, trying to protect her child from a world she felt was irredeemably evil. This and her obsessive need for a companion leads to her psychosis. “She ends up being a pretty terrible parent, but not out of any intention of her own,” said the actress.  “I wanted everything I did with Carrie to be about Margaret’s desire to parent this child correctly.”

Moore feels what Margaret does to Carrie is not intended to be abusive, but actually very much is. “I wanted all the actions toward Carrie to be reflective of Margaret parenting Carrie, not of abusing her. From her perspective, that’s what she thinks she’s doing.” This unintentional abuse of her daughter is the source of much of the story’s most horrifying moments. “The thing about being a child is, you are relatively powerless,” Moore postulated. “When you think about what Carrie has been dealing with all of these years, it really is scary.”

The actress saw the 1976 version of Carrie when she was 14, and was freaked out as soon as she saw a terrified, pale white crowd exiting the theater as she was about to go in. She and her friends went in expecting the most horrifying movie they ever saw, not an emotional tale of a mother and daughter… until, the very end, at least.  To Moore, this balance of horror and true human drama is critical to getting the story right. “In a sense, [King] is echoing everybody’s feelings of being different, or left out, as an adolescent,” she said. “It’s not a polemic– it’s entertainment. But it certainly presents it.” 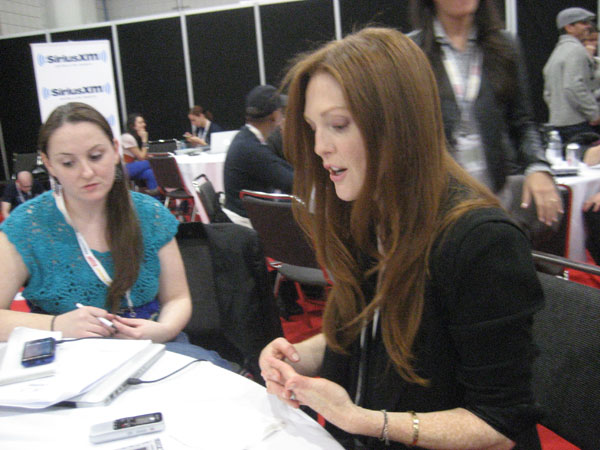 Check back tomorrow for more Carrie from NYCC, as Chloe Moretz and Kimberly Peirce discuss the notorious blood dropping finale!