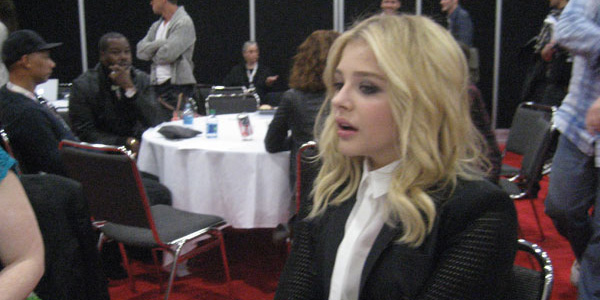 Chloe Grace Moretz is no stranger to genre cinema, with an incredible body of complex and intelligent work in films like Kick-Ass, Let Me In and the upcoming Kick-Ass 2 that belie her young age. The actress will star in the new version of Carrie next Spring, and she was on hand at New York Comic Con to talk about stepping into the iconic role.
When Moretz was first cast as the new Carrie, there were many who claimed she was too pretty to play the trouble young girl. Moretz sees that as part of the challenge of acting “You see Nicole Kidman in The Hours, where she has the nose and you go ‘Oh my god, it’s a versatile actress’… No matter how beautiful you are, as long as you’re that actor, you can be whoever you want to be.”

Chloe wanted to do something she had never done before with this character, which is a change from her non-method style of acting– she wanted to immerse herself in the character, on and off cmamra. She wanted to look in the mirror and see Carrie, not herself.  “It was really, really interesting,” she said. “I love feeling new things, I’m very experimental with acting.  When I started Carrie, I’m not the same actor that I am now once I finished it.”

Carrie is a character very unlike the energetic and outgoing Moretz, but she also strangely related to her character.  As she was coming into her own as an actress, Moretz had been told a thousand times that she wouldn’t make it, but she’s now reaching farther than either she, or her detractors ever imagined. “I drew from a lot of stuff that’s happened to me,” she explained. “I’ve been told ‘no’ in a lot of stuff my whole life, and I’ve been told you’re never gonna succeed to that. I had to take everything I built up and all the emotions in front of that… and bring out all the insecurities for this movie.”

The biggest hurdle an actor can face in a retelling such as this is to step out of the shadow of the previous stars, something Moretz is absolutely aware of in light of Sissy Spacek’s otherworldly performance in the 1976 movie. The actress wanted to make sure her version of Carrie was her own take. “I wanted to create my own character,” she stated. “I wanted my character to stand alone.”  Moretz believes the new movie is more a retelling of the book than a remake of the movie, so she doesn’t want to get hung up on comparisons– that level of expectation will get in the way of success. “You’ve just gotta live, and do your thing, and be happy with what you put out,” she explained. “As long as you’re happy, who cares what they think?”

One way Moretz’ take will be unique is she’s an actual teenager, unlike Spacek who was in her late 20’s when she played the role. “[she’s] a real 15 year old girl,” explained Julianne Moore, who plays Carrie’s mother Margaret. “I think it was interesting to actually have a Carrie who was an adolscent, who really is at this point in her life when all these things are changing.” Both performers wanted to explore the mother-daughter relationship that had to be the focus of the story, and Moore believes this clash is the source of Carrie’s metaphorical powers. “For a child, super power is adulthood,” she explained. “This is all about a girl growing up and becoming an adult, and moving away from her mother.” The powers are clear metaphors for Carrie’s feelings, which is exactly how Chloe saw things, as well.

“The movie starts off as this young girl who is gawky and confused and awkward… then she becomes this young woman who goes to Prom– she’s pretty and she can smile a genuine smile. She’s actually alone, and living,” said the young star. “If this night went well, this girl could become someone else, and become this beautiful person and go live on and become whoever she wants to be, because she’s strong now.”  But of course, that’s not the tragic story King told almost 40 years ago. Carrie is fated for a fall, and it leads to the tale’s tragic, bloody conclusion. “Her whole world comes falling down upon her,” said Moretz. “And the telekinetic powers take in all those feelings and multiply it by a thousand.”

Carrie’s on-screen Prom doesn’t exactly work out, but Moretz admits it’s the closest she’s been to Prom so far. “I’m only a sophomore, so I can’t even go to Prom until junior year at least.  I won’t actually ever have a real prom because I’m home-schooled. I mean, my living room– I could squeeze in everyone, she joked, adding “I’ll go to some prom. Prom… it’s just kinda stupid.”

Other than maybe the Prom thing, Moretz is fully invested in her take on the character. “Hopefully what you think when you see Carrie isn’t ‘That’s Chloe Moretz dressing up with red hair and an ugly dress…’ Hopefully you’ll look at it and go ‘That’s Carrie.’,” she said. “Hopefully, you’ll see something you’ve never seen from me.” 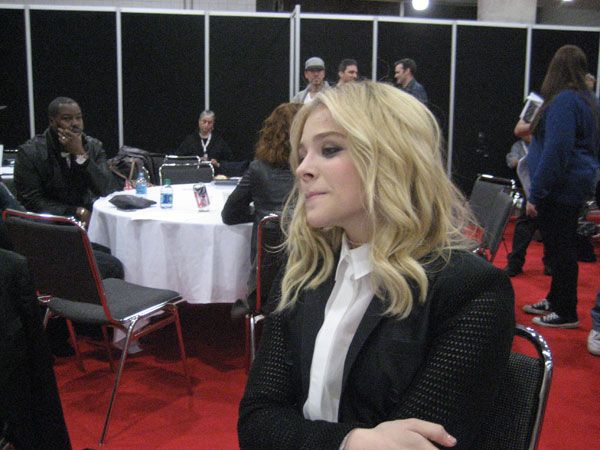 Check back tomorrow for more Carrie at NYCC, as we talk to Julianne Moore about making a human out of Carrie’s monstrous mother!