NYCC 2012: Merle Is Back! Michael Rooker Talks His Return To The Walking Dead 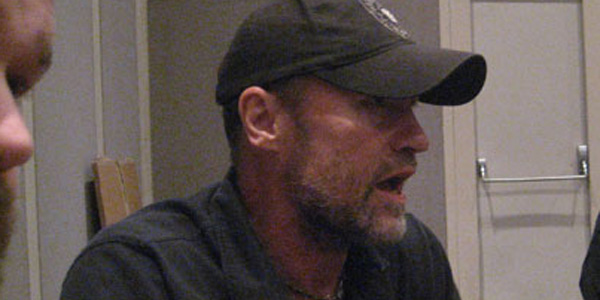 The Walking Dead Season Three promises some major shakeups for the cast, and new additions like Michonne and The Governor, but that’s not all– we’re also finally reunited with Daryl’s wayward brother Merle! The redneck fan favorite has been waiting in the wings, short one hand, and amazing actor Michael Rooker shared his insight on Merle’s return at New York Comic Con.
“Merle had to cut his hand off. He’s not happy about that,” Rooker teased. “That’s not a happy moment… when you see me next, I have a healed hand, and a wee bit of an apparatus on it.”

Creator Robert Kirkman was quick to chime in that the “apparatus” is a knife, something he had considered adding to Rick’s arsenal, when the comic character lost a hand himself in the series.  But now that merle is rocking this weapon, don’t expect Rick to get his own anytime soon in the pages of the book. “I havent really had a good chance to do that, I’ve always kind of struggled with it,” Kirkman stated.  “Now that we’ve done it in the show, I feel like we’d be copying the show.”

Merle’s comeback will definitely have repercussions on the group, but it’s a mystery how exactly he will impact the group for better or worse. Rooker explains “Merle survived by taking care of his own, no one else is doing it for him– they actually left me on the rooftop, cuffed, no food, no water. But the guy’s a survivor, and he’ll do whatever he needs to do to survive.” There’s a number of people who can be blamed for Merle’s abandonment… Rick is the one who cuffed him, but T-Dog dropped the key, leaving the racist thug trapped.  Rooker has a different perspective on who Merle blames for his hardship. “I think Merle at first blamed God for not answering him right away,” he recalled. “At that point in time, i think Merle blames everyone, and himself, and everything… that’s who he was, and maybe not necessarily who he is now. Those kind events tend to change people, whether it’s a positive or negative.”

Even if Merle has changed after his traumatic experience, don’t expect him to do a 180– “I dare you to say Merle is all about love and peace!” exclaimed Rooker.

We won’t specifically see how Merle got from the rooftop to Woodbury, as the creative team is trying to avoid flashbacks when they can, opting instead to tell the tale through context and keep a forward momentum.  “There is a tremendous amount of really cool, shocking things in the third season that i think diehard fans of the comic series are not going to see coming,” said Kirkman. “And they’re absolutely going to love.”

The master plan for Merle to come back was not really in place from the start. It was never Kirkman’s intention to abndon him on the rooftop forever, but once Rooker came to the role and made it his own, the character was expanded. “Once we saw how he portrayed that character, we fell in love with him just like the fans,” said Kirkman.

Rooker expected one or two episodes with the show, but after Merle’s monologue on the roof, the actor had a hunch bigger things were in his future. And the way he sees it, hints of Merle’s presence have been a good thing for the survivors all along– “They keep bringing the idea of Merle back, with his bike, his stash of meds… Actually Merle saved T-Dog with his clap medicine,” said Rooker.  “It was interesting how the idea of Merle kept folding in these moments.  They fold things in… almost without you even all of a sudden realizing ‘I didn’t see that the first time I saw this episode.’  My poor brother wouldn’t have a means of transportation– he’d be walking. T-Dog, with the meds that were stashed in my bike, they saved a lot of people. I think they owe Merle a little bit of gratitude.”

Merle is an unpredictable character, and it’s a mystery how he’ll even take to finding Daryl alive and well, let alone the other survivors. “I have no idea my brother’s even alive,” said Rooker. “I think you’re gonna like a lot of the changes that have occurred.”  Merle’s return will obviously have a major impact from his little brother Daryl’s perspective, as well.  Daryl lived in the shadow of his brother before joining Rick’s group, and Norman Reedus thinks there’s a sense of embarassment and fear in Daryl that he will turn in to his brother.  He believes this will resurface when he sees his sibling again. “It makes sense for him, once that influence was gone, to figure out who he is for the first time. And there’s all these people that he’d never hang out with… he feels that they feel there’s a value in having Daryl, and there’s a respect for Daryl, and Daryl would do anything to help keep these people alive. Knowing that I’m needed feels good.”

The past two seasons are the first time Daryl has had the chance to have these grown up responsibilities, bringing him into his own, and the return of Merle will send him back down into his brother’s shadow once again. Daryl’s evolution from a weird loner to Rick’s right hand man has been an organic progression, stemming from the writers’ room as the creative team mapped out their stories, which producer Gale Anne Hurd believes is critical to feeling natural on screen.

This creative dynamic has been used to tweak the writers’ plans many times, most recently with Hershel. “The original idea was that Hershel was going to die in the second season,” explained Hurd. “We knew Scot Wilson was a fantastic actor, but what he brought to the role was so layered. And we realized, if Dale is gone… Hershel steps in as the voice of morality. He’s someone that Rick listens to and Rick respects.”

Will Daryl try to bring Merle back to the group, or will the brothers divorce from the group entirely?  How Merle’s return plays out is a complete question mark, but the creators insist it won’t be simple.  “There’s never going to be something that’s incredibly simple and obvious,” stated Hurd. “It’s more complicated than join us/ don’t join us.”  Reedus agreed, saying “It’s complicated to the point where, even the characters playing the parts and saying the words– it’s like [saying] ‘The ocean is blue. Wait, is it?'”

Check back tomorrow for more from The Walking Dead at New York Comic Con… including Robert Kirkman’s story of reuniting with the cast member he just killed off in the comic book!