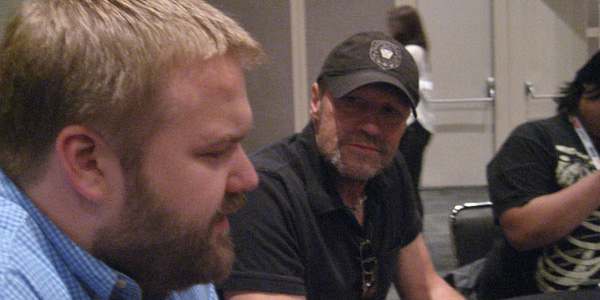 Issue #100 of The Walking Dead saw a major character death that has already had shocking ripples throughout the comic series.  It also marks the first time Kirkman has killed a major player who’s still a series regular on the AMC TV adaptation. [**WARNING: COMIC SPOILERS WITHIN**]
After Robert Kirkman brutally killed off comic book regular Glenn in issue 100 of the comic, the writer received a nervous email from actor Steven Yeun about it. Kirkman talked about the awkwardness of killing someone who was also a manistay of the TV series cast at New York Comic Con.

“It’s somewhat uncomfortable,” Kirkman said. “The character that dies in Walking Dead #100 is really the first time that someone has died in the comic book while they were still an actor in the show portraying the character.  All of the other deaths in the comic happened previous to them appearing in the show or [they] died before the show existed.”

Producer Gale Anne Hurd also recalls the uncomfortable vibe after issue 100 was released, saying “Poor Steven Yeun. The day issue 100 came out… it was not a happy day.”

“It was kind of an odd thing for me, to be writing that story, knowing that actor and having to see them again,” admitted Kirkman.  But the writer was quick to add that just because Glenn met such a terrible fate in the comic doesn’t mean the same outcome is set in stone on the TV adaptation. “Because the comic and the show are so separate, it’s not like we’re set on that path, and that that’s something that’s necessarily going to happen in the TV show or anytime soon.”

Kirkman insisted Glenn’s particularly grisly death was nothing personal against Yeun, although he did add only half-jokingly “The actors need to be on their toes.”