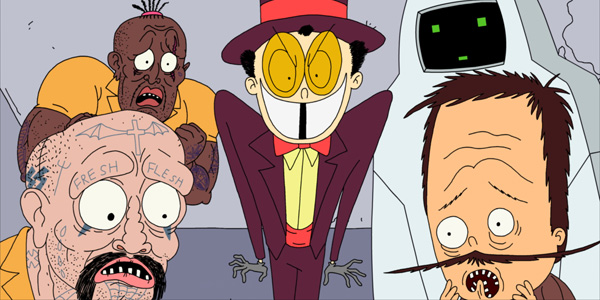 Superjail! is tearing up its third season on Adult Swim every Sunday, and the minds behind the hilariously violent cartoon talked all about where they came from and what’s coming next at New York Comic Con.

Superjail! has a very distinct style, both in its stories and visual sensibility. Creators Christy Karacas and Steve Warbrick cited a wide range of influences behind the unique look and feel of the show. Everything from Woody Woodpecker and Looney Tunes, to indie comics and Fangoria had a hand in painting the world of Superjail!, which was aptly summed up as the guys said “It’s [the result] if serial killers and rapists were being incarcerated in the Chocolate Factory.”

More than aping any one style, the tone of the show was set by something both simpler and more abstract– doodles. The real concept behind the design of the show was based on “What a pissed off kid in High School would draw on his notebook.”

Season One of the animated series focused strongly on psychedelic visuals and the series’ signature hyper-violence, while Season Two saw a concentration on story and characters. The creators hope Season Three can combine both of these into one package, and fans of the hyper-violent first season will be happy to know they are bringing back the gloriously violent chaos that ended each episode of that season.

Balancing characters and insanity is a challenge, leading to a very tight writing schedule and a fast production turnaround. Voices are recorded, then Karacas and the team storyboard, audio is edited to get ready for rough animation, which takes a few weeks per episode. From there, any aspect from minor cuts to scripted rewrites take place. It’s a long process for an 11-minute show, which is one of the reasons they don’t plan on extending to 22 minutes anytime soon.

“I think part of Superjail!‘s charm is even though it’s digital, it’s all hand-drawn, frame by frame,” said Karacas. “It’s very labor intensive, it also gives us a style and charm.” The process also lends itself to lots of collaboration, where different team members can come up with new riffs and story ideas while collaborating with other artists working on the show. Allowing script rewrites to add more jokes or entire new plotlines is a very demanding and unique– yet ultimately rewarding– part of the process.

A lot of the humor is added to the scripts after the fact, which is more fluid and dynamic than a lot of regimented writers and animators are used to. The team is always trying to add gags wherever they can– a script might say a character punches a guy, but someone realizes they’re in a kitchen, so they decide he takes a shish kebab skewer and stabs the guy in the eyes, then his eyes get stuck on the skewer.

In addition to a return to mega-violence and continuing complex stories, Season Three will also introduce more new characters, similar to Lord Stingray from the sophomore run. There’s a feeling of escalation this season, as each episode builds on what has transpired before, which the creators believe fans will be psyched about. That being said, they’re curious who, exactly, these fans are.

“I always wonder who’s watching it [the show],” admitted Karacas. “Is it High School kids, or college kids?… Because a lot of people my age don’t watch cartoons. That was the joke– I’m like 37, and making a show where dudes are getting their heads blown off… it’s fun but I wonder what the average Superjail! [viewer] is.”

Tune in to all new episodes of Superjail! Season Three each Sunday night at 12:15 on Adult Swim!

Big ups to Ahren Gauthier for reporting on this interview session!  Check out his website Improbable Cast for more on Ahren.