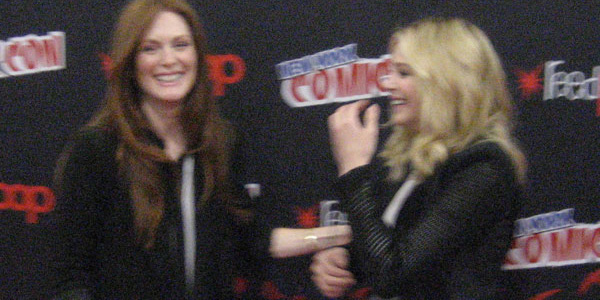 The cast and creators behind Carrie, next Spring’s retelling of the iconic Stephen King novel were on hand at New York Comic Con to discuss how they approached the classic story for a new generation.
It’s been almost 40 years since Stephen King’s Carrie first hit bookshelves, and the timing seems perfect for the new adaptation starring Chloe Grace Moretz and Julianne Moore to introduce Carrie to a whole new generation.  This makes the new version more than just a remake, as it can reach the nostalgic audience that fell in love with the 1976 film starring Sissy Spacek and Piper Laurie, as well as a whole new teen audience, who are already keyed in for the next big supernatural story. 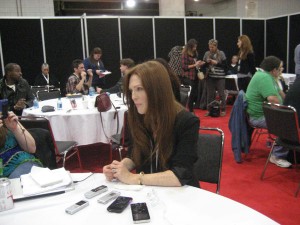 “You can think of Carrie as the first Twilight, in a way,” said producer Kevin Misher. “Here’s a book that, on a supernatural basis, spoke to a teen audience. The best horror is a reflection of its times.”  Misher finds it strange that the classic novel is all about High School students, yet he doesn’t believe that today’s High School students really know the story. This tells him now is the time for a new take on King’s tale, and faithfulness to the source material is critical for everyone involved. “It’s very respectful of the original classic book,” confirmed Misher.

The creators brought as much authenticity to the new Carrie as possible, right down to the decision to use the exact hymn King mentions in his novel, which Julianne Moore’s Margaret sings to her daughter.  From the look of the houses in the town to the date of the prom, the original novel was mined for as much source material as possible, as was the R rating.  “We’re an R-rated movie,” Misher said. “We felt we couldn’t try and be respectful of the original work, and do it justice in a PG13 movie.  We were accurate in our depiction in terms of the violence that was articulated in the book.” 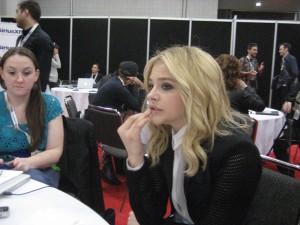 That’s clear in the book, but Kim went out of her way to make Margaret more empathetic. “When you’re writing about characters that could be deemed negative, you have to maintain the authenticity of that negativity, but you have to give the audience a way in, because the audience will just tune them out.  I applied that lens to the mother– I love Margaret White, and I love her defensiveness of her daughter. I applied that lens to the use of religion.  I want you to love religion in this movie, and I want you to love Maragret’s love of religion.” 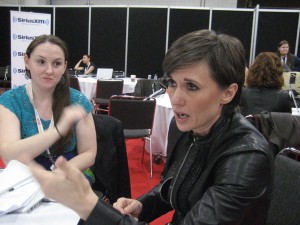 Peirce, who made a name for herself directing Boys Don’t Cry and Stop-Loss, applied this same empathy to Carrie’s antagonist Chris, to get inside her obsession with tearing Carrie down. “You want to get inside Chris, and understand why she keeps escalating the attack against Carrie. Why does she care? Why is she not getting laid by her boyfriend? Why is she going to a pig farm, killing a pig?”

While Carrie has always been a story about bullying, but the rise of bullying awareness wasn’t something the new movie is specifically targeted.  The movie is more broad in its approach, with reflections of the modern world conveyed through the characters as Peirce describes.

“You need to love that character, and you need to keep giving them causality.” the director explains of Chris’ motivations. “Chris gets kicked out of the school in our movie. She can’t go to the prom in our movie… her pissed off-ed-ness is always in consequence to what’s happened.” 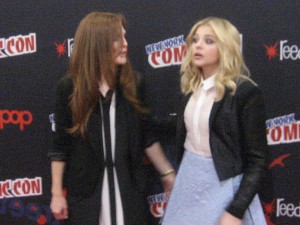 Story structure is very important to Peirce as a director, so she was sure to apply this sense of logic and causality to every aspect of the film. And while Peirce isn’t one to wave a flag of empty “girl power,” she does feel being the first woman to tell the tale of Carrie will make it a very different experience.  “Any good director can do a great job. Men or women can be great directors [but] Jim Cameron is not an Avatar, Coppola is not a Godfather,” she said. “But they still made brilliant movies about things they didn’t know about. But if you do know something about a character, you always find what you do know. I have a mother, and I’ve had war with my mother, and I love my mother, and I’ve broken up with my mother. Most women have really overly incestuous relationships with their mother, and that’s what’s going on here.”

“I know how girls act when they’re alone with each other,” the director continued. “And I know how women use power and don’t use power.” The only reason Peirce picked this project is because she felt shew could bring something new to the story she loves so much.  “You don’t see that many women on screen that much.  It’s unusual– you don’t see these stories that much.”

Check back tomorrow for more on Carrie from New York Comic Con, as we sit down with the new Carrie herself, Chloe Grace Moretz!