NYCC 2012: The Walking Dead Talks Michonne, The Governor & Their Impact 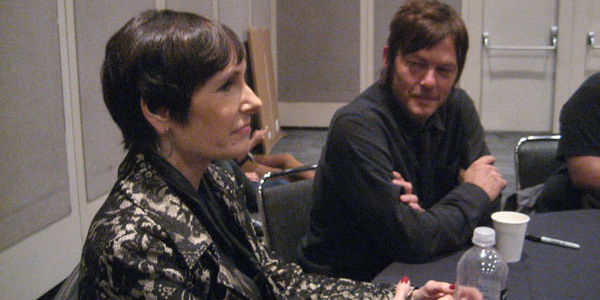 Season Three of The Walking Dead doesn’t just catch us up with our group of survivors— it also introduces us to a whole new cast including comic book favorites Michonne and The Governor. The cast and creator Robert Kirkman were more than willing to discuss these new characters, and what impact they will have on the AMC series, when they sat down for a talk at New York Comic Con.

Michonne and The Governor are both making their debut in Season Three of The Walking Dead, and while both characters were absolute fan favorites in the comic book source material, I’m not alone in my belief that they are far more stylized creations, which seems to clash with the more grounded atmosphere of the TV series.  Not so says series scribe and comic creator Robert Kirkman.

“The comic book is as realistic as the TV show, at least I try to be,” he said during an interview at The Walking Dead press roundtables at NYCC.  “When you start bringing in elements like The Governor and Michonne, it’s really kind of analyzing the world and saying these are the kind of people that exist in this world now, and it shows a progression of time. It shows other people that have been existing separate from Rick and the other group, and showing how different people have adapted to what’s going on.”

Of course, calling someone like the katana-wielding, zombie-slaying Michonne unbelievable is the context of a show that’s built on a fantastical idea to begin with.  “You have a character like Michonne who’s been living on her own, and she’s got this katana sword and she’s come up with this system where these pets protect her to a certain extent, and that’s how she’s survived,” Kirkman continued.  “Everything that she’s done, while it is fantastical, is no more fantastical than a dead person getting up and walking around. Everything she’s done has been worked out in reality, and does to a certain extent make sense.”

The Governor is another stylized icon from the comics, but the writers have found ways to adapt him more directly into the world of the TV show. “He’s a little bit over the top, he is a bit of a bad guy,” said Kirkman of the leader of the new camp of survivors in Woodbury. “But you see the decisions that he makes and the things that he lives through and how that informs everything that he does.”  Introducing the Governor earlier in the story offers another way to ground him.  “It’s almost like we’re meeting The Governor, before the Governor who was created in the comic book,” said producer Gale Anne Hurd. “That he’s grounded, that he’s charismatic, and that he is a natural leader for this world– and he actually wants to do the right thing. He’s not just twisted.”

So, thankfully, the creators are cognizant of the comic book-y framework of the new cast members, and they’re promising Michonne and The Governor will not change the dynamic of the show, which is great news for an aspiring fan like me. “They’re very grounded in our series,” Kirkman asserted. “Yes, [Michonne] kicks a lot of ass, but she’s developing a real bond with Andrea. The dynamic is changing because now we have two camps, we have two groups of people.”

But the question remains, how will Rick and the survivors take to these new people in their landscape? Stars Andrew Lincoln and Norman Reedus each offered their thoughts on how the new characters will impact the status quo.

Reedus’ Daryl has been the resident badass of the group, not unlike the capable Michonne from the comic, but Reedus believes the two are very different people. “We both can kick your ass, but we’re very different people. she’s very fluid with her sword, I’m very fluid with [my bow]… in those respects, yea we’re very similar. The first time I see her on camera, I’m like ‘Pfft– what’s this? Nice outfit. A sword??’ and then there’s also… I’m kind of like, watching her [asking] ‘what’s this about?'”

Reedus feels both Daryl and Michonne are damaged people, the same in that respect… but that describes a majority of the growingly capable cast of the series. “We have a lot of badasses on this show,” Reedus stated. “In Season Three, everyone can make it through the night.”

For his part, Daryl has begun to trust others for the first time in his life, and see his place in the group. But Hurd wonders if Michonne will ever see her place among these people. “She’s an outsider, and we will come to find out perhaps why,” she said, before adding. “I can’t imagine [Daryl] having two pet zombies.”  An ear necklace is one thing, though– according to Reedus that’s just a fashion statement. “She’s clever in the ways she’s figuring out things. I think there’s a mutual respect for each other as well. We get each other, we’re both lonely people to begin with.”

Lincoln admits Rick has similar common bonds with the dangerous Governor.  The two men are the leaders of their respective camps, and Lincoln believes they are both similar and very different. “Rick kept all the kills and all the responsibilities and their bad crews weigh heavily on him and change him,” he said of his protagonist. “I think The Governor is able to compartmentalize that, and go ‘That’s the new world.’ It doesn’t erode his soul. I think Rick feels every single death.”

This attitude sounds like it describes the late Shane, as much as the Governor, which Lincoln agrees with. “I think if Shane had still been around and set up camp, it may have been not dissimilar to the Governor’s, to Woodbury.”

“There is a common bond of leadership that these two men recognize in one another, and it’s a reference point,” Lincoln continues. “Rick is certainly a reluctant leader… he didn’t really want to be there in the first place, but he keeps stepping up. I don’t know The Governor’s story… but I think that would certainly be an interesting thing to recognize.” 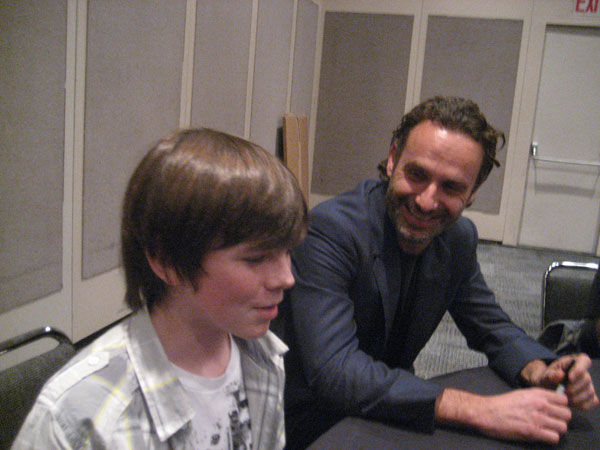 Check back tomorrow for more from The Walking Dead cast and crew… including our talk with Merle himself– Michael Rooker!