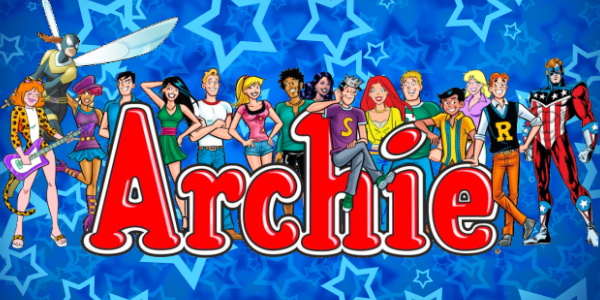 Although an enormous line of hundreds of eager fans snaked around the queue, very few people were admitted into this year’s Archie Comics panel at New York Comic Con.  Despite this being one of the most popular comics-related attractions year-after-year, the panel has hosted in a small 70-seat room and many folks were turned away, which is unfortunate as this was hands-down the greatest panel I attended the entire weekend – fast-paced and loaded with information.

Moderated by writer Roberto Aguirre-Sacasa, the panelists included co-CEO Jon Goldwater, editor-in-chief and co-president Victor Gorelick, Eisner-award-winning artist Francesco Francavilla, writer Michael Uslan, writer/artist Dan Parent, and co-president Mike Pellerito.  With nearly 70 years of quality books under their belt, the attendees spanned generations, from long-time fans to very young folks who are likely just discovering the Archie universe.  It was really great to see kids in attendance since reading Archie books as a child is what turned me onto comics in the first place, and I still hold the franchise in very high regard.

The panel kicked off with a semi-animated trailer highlighted their new horror series “Afterlife with Archie.” Writer Aguirre-Sacasa advised that the idea for the book stemmed from the variant cover Francavilla drew for “Life with Archie” #23 featuring zombie-themed artwork.  He recalled, “I bought the book thinking, ‘Maybe there’s an imaginary story or dream sequence that has Archie with zombies.  There wasn’t, but I loved the cover. I was having breakfast with Jon Goldwater and his son Jessie in Los Angeles, we were taking about something, and then afterwards I said, ‘By the way, Francesco’s cover is amazing. You have to make a poster so I can hang in my bedroom.’  There was kind of this weird pause, and then Jesse and Jon and I all were like, ‘This needs to be a comic book.’  Two hours later, Jon sent me an e-mail that said, ‘Let’s do it.  We’re doing it.’  That was less than a year ago, and now the book is on the stands.”  The first issue, which hit stands on October 9th, is incredible – rooted in a classic horror aesthetic and equally weird and dark, it’s still unmistakably “Archie” and a surprisingly fresh take on a zombie apocalypse tale as the undead descend on Riverdale.  Currently, the plan is that this will be an ongoing series, with the first twelve issues already scripted and underway.  Aguire-Sacasa hinted that, along the way, fans would get to see a multitude of characters, some that haven’t been seen in a while; adding, “The zombie apocalypse will affect everyone in the Archie Universe.”  The covers they revealed for some upcoming issues really set the vibe perfectly and I especially loved the cover of #2, simply featuring a blood-spattered Riverdale School vest.

We were then treated to previews of two brand new animated series, starting with Sabrina: Secrets of a Teenage Witch. Premiering on the Hub network, the trailer showed a young, audacious Sabrina racing against an unknown male rival while being chased by huge werewolves through a lush forest oversaturated with color.  Using CGI animation, it looked like great fun but paled in comparison to “It’s Archie,” an upcoming, more traditional-looking cartoon featuring the gang as squat little kids in search of Scooby-Doo-like adventure.  Set to premiere next fall, I’ll absolutely be looking forward to seeing more of it.

Brief announcements were made regarding both Archie-themed apps as well.  “Riverdale Rescue,” the freemium iOS title will be seeing updates as well as a release on Android & Windows devices, while the Archie Comics/Red Circle apps will be overhauled with a completely new layout and options.  A new “Afterlife with Archie” app launched last week and was featured by Apple as the as the best new app in the books section.  Essentially, fans will be able to subscribe within the app and pay $4.99 per month for each new issue of the book.  You may be scratching your head and thinking, “That’s even more than newsstand prices…” but there’s good reason.  Subscribers will have access to enhanced versions of each book, containing samples of the original script and backup stories along with pre-production layouts of each page.  For hardcore fans or those wanting more insight into the creative process, this is a very cool offering.

The panel then shifted to a great deal of comic-related news; one of the coolest announcements being the launch of a new super-hero book, The Fox.  Written by the great Wark Waid and illustrated by Dean Haspiel (who has recently won an Emmy for his outstanding work on the title sequence to HBO’s Bored to Death), The Fox looks to be a book focused on all-out fun and zaniness.  After having been introduced to two of his arch-rivals, Madame Satan and the Queen of Diamonds, one can’t help but compare the book to The Tick.  Pellerito quipped that The Fox is “a true freak magnet. Everything you’ve ever thought should be in a comic book but they were too scared to do…that’s this book.”

In the upcoming landmark issue, Archie #650, fans will see every musical incarnation in the Archie Universe, from Josie & The Pussycats to the Madhouse Glads, as well as lots of seldom-seen side-characters as the gang embarks on a world tour.  There were also hints that, next year, a huge event will happen in the pages of Life with Archie that has never happened in one of their books.  A big announcement is in the works, but the reveals won’t begin until January.  But surely they couldn’t compare to the bombshell they dropped regarding the future of two of Riverdale’s most beloved characters.

Michael Uslan stood up to address the crowd, prefacing his news by describing a career at Archie Comics as a place where creative people never hear the word “no.”  Now, the man responsible for the series that saw Archie tie the knot has been given the green light for a new arc entitled “Farewell to Betty & Veronica.”  As soon as those words passed his lips, there was a collective gasp from the audience (I think I audibly let out a “wait…what?!”) followed by complete silence. Uslan went on to imply that both characters have become so multi-faceted, yet wholly distinct, to the point where nearly every person could be classified as a “Betty” or a “Veronica” but asked “What really, truly defines what being a Betty or being a Veronica is?”  He went on to say, “We are going to explore that, but in the process, we’re going to have to say, and Riverdale is going to have to say, goodbye to Betty and Veronica.  I don’t want to tell you too much about it, but it is going to shake up a lot of people.  There is going to be a vacuum in Riverdale, there’s going to be guys going crazy, there’s going to be a lot of tears, but then there’s going to be twists, turns, surprises and two new characters that I think you are really going to be floored by.”  Dan Parent will be doing the art for this story, which will hits shelves sometime next year, but all other details were strictly under wraps, leaving a room full of people shocked (if not a bit disheartened) that the two mainstays may be gone for good – but still intrigued and looking forward to how this will be executed and on what terms they’ll be departing.

Surprisingly, there was no mention made of the live-action film based on Archie and the gang until the Q&A session, when it was confirmed that the movie is currently in the works and will be directed by Jason Moore, whose previous work includes the musical hit Pitch Perfect.  Being an Archie title, music is sure to play a large part in the film but I’m really hoping they don’t approach it as a full-on musical.  I’m sure more details will be leaking soon in regards to the casting but their lips are sealed for now.  Altogether, this was a stellar showcase of what Archie Comics has on the horizon and a testament to their continued success and relevancy.