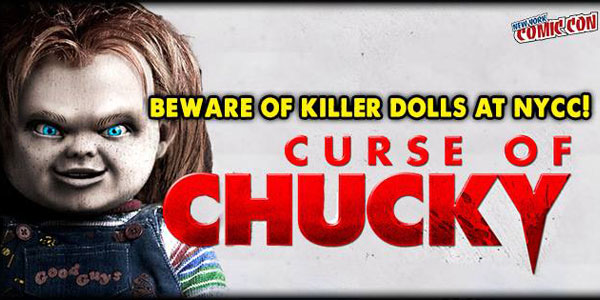 It’s hard to believe the world’s most iconic killer doll Chucky is celebrating his 25th Anniversary, but he is, and he and his fans got to celebrate at NYCC with a great panel featuring creator Don Mancini, Brad Dourif, Jennifer Tilly, Alex Vincent (Andy from the original two movies), and Finoa Dourif and Danielle Bisutti, two of the stars of Chucky’s sixth film Curse of Chucky.

Panel moderator Harry Knowles of Ain’t It Cool talked with Mancini about the origins of the little plastic slasher.  Mancini, whose father was in advertising, had always been fascinated by the Cabbage Patch Kids craze, and the early 80s concept of kids as “consumer trainees.”  Chucky stemmed from this concept, and was one of the pioneers of an animatronic doll as a full-fledged main character of a film.

Of course, the other half of the Chucky equation is Brad Dourif, who has been the killer’s voice from the start.  Dourif created the iconic Chucky voice during rehearsals, and has evolved with the character ever since.  “It slowly dawned on me that Chucky loved his job,” said Dourif. “He has a fuckin’ blast. I learned that from Chucky.”

The Chucky franchise has changed from horror to camp, and back to more direct horror in the latest movie, and the idea of reinventing the franchise over and over has always been a part of Mancini’s plan.  “Starting with Bride [of Chucky], David Kirschner and I didn’t want to make the same movie over and over,” he recalled. “We thought, rather than run away from the absurdity– which we CAN do, like in Curse [of Chucky]— we’d embrace it and get inside Chucky’s head… We know more about him that most horror villains.”

Adding Jennifer Tilly’s Tiffany to the mix in Bride of Chucky was a definite game changer for the franchise, one that reinvigorated everything from Mancini’s writing to Dourif’s acting.  “Jennifer changed Chucky enormously,” Dourif said.  “I was lonely because I had to do these movies by myself.  It was so cool that Jennifer recorded with me.”

The pair recorded much of their voice work together in the same studio, which Tilly also believed added an energy and sense of fun to the performances.  “It felt like a radio play,” she said.  “Don wanted us to record together, to have a chemistry.”  Working in unison also allowed for some great ad libs that made the final cut– in fact, the classic “Shouldn’t you wear a rubber?” dialogue was made up by the actors in the booth.

Curse of Chucky is a return to horror for the series, but just because the comedy is dialed down, doesn’t mean it wasn’t a fun experience.  And the film’s production is a real “in the family” kind of thing– the new hero, Nica is played by Fiona Dourif, Brad’s daughter.  Her on screen sister Barb, played by Danielle Bisutti, also had relatives involved with the early films’ production.  And the movie features the return of Alex Vincent’s Andy, all grown up after his ordeals against Chucky in Child’s Play 1 and 2.

Fiona was happy to get the role in the new movie, since Chucky has always been such a big part of her family, and something she’s always been proud of.  “Everybody knew my dad was Chucky,” she said. “It was the coolest thing about dating me in Junior High School.”

Andy’s return had been one of the best kept secrets of the latest film, something fans have been hoping for for nearly 20 years.  While it’s great to see Vincent return to the cast, Mancini said he had bigger things planned for Andy’s return.  “In the script, the very last shot of the film pulls back from Andy’s apartment and reveals the building says ‘Andy’s Gun Shop.’ It showed how Chucky affected his life.”

With 25 years and six movies, Chucky has affected the lives of many horror fans.  It was great to look back on this fascinating franchise as a whole, and it’s clear to see how much fun Mancini and his twisted Child’s Play family have had all along.

And to help us all share in that fun, the NYCC panel was also treated to a “Chucky Megamix,” featuring the best kills from the tiny murderer, courtesy of Mike Relm.  Check that out below: