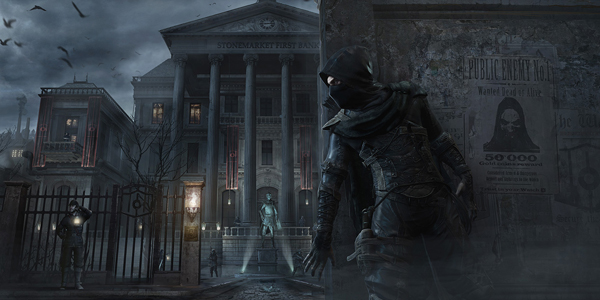 Eidos Montreal, the studio behind 2012’s amazing Deus Ex: Human Revolution, offered us some quality time with their upcoming title, Thief, a re-imagining of the classic franchise published by Square Enix; and what we were able to experience, even in this early build, was absolutely incredible.

Stepping into the boots of series mainstay, Garrett, we find ourselves back in the clock tower where we are first tasked with finding Basile, a local with some unsavory jobs that required completion.  The first thing we noticed upon gaining control of the character, apart from the incredible visuals, is how smoothly the game runs.  While exploring the clock tower, you can get acquainted with the fluent way Garrett controls and slinks about his environment.  Clicking in on the thumbstick will put you into a crouching/sneaking position, in which the designers cleverly inserted Garrett’s hands into the player’s view, as if the character is being extremely cautious and acutely aware of his surroundings.  As cover will obviously play a large role in any stealth game, Thief features a “swoop” command that will allow you to transfer from one cover to another while remaining silent — it also gives way to a subtle blur effect as Garrett hurriedly rushes into hiding, eager to remain in the shadows. 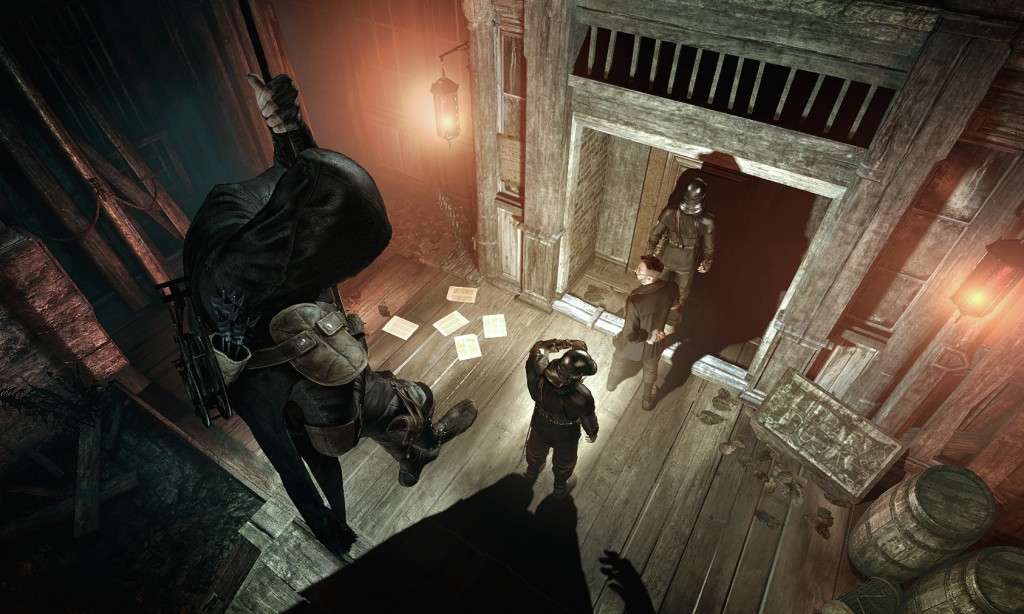 Speaking of shadows, Thief features an intuitive meter that advises the player how well concealed they are.  While bathed in sunlight, the meter will glow brightly, getting progressively darker, all the way down to an inky black void that’s displayed when you are well-concealed.  The light remains your greatest enemy in Thief and keeping to the shadows, eluding guards and completing objectives undetected, is as satisfying as ever. There is also a well-implemented “peek” mechanic that allows Garrett to stealthily peer around corners, eyeballing your enemies and waiting for the proper moment to strike since, if you need to resort to combat, it’s best approached while your target is unaware.  Outfitted with a number of weapons and tools, Garrett has all the options he needs to approach any situation.  For example, equipping Garrett’s compound bow, fire arrows can be used to start fire and create a diversion while water arrows can extinguish candles, lanterns, and other like sources of light.  Choke arrows emit a blinding gas cloud upon impact that can disorient foes and rope arrows can be employed to create climbable rope ladders for a quick getaway or access to otherwise out-of-reach ledges.  These tools are easily selectable at the touch of a button by calling up the weapon wheel and equipping whatever is needed.  In addition, meat packages can be purchased and consumed to restore health (which does not regenerate on its own) and poppy flowers can be used to replenish your focus meter. Focus is an important skill that will allow your character to concentrate on his surroundings, highlighting important objects and enemy AI in the area.  And keeping tabs on enemy locations is definitely something you’ll want to make a habit of as, in my experience, your foes often travel in pairs and will hint you doggedly until they’ve got you cornered.  Of course, using this ability drains you’re focus meter, so it must be employed strategically. 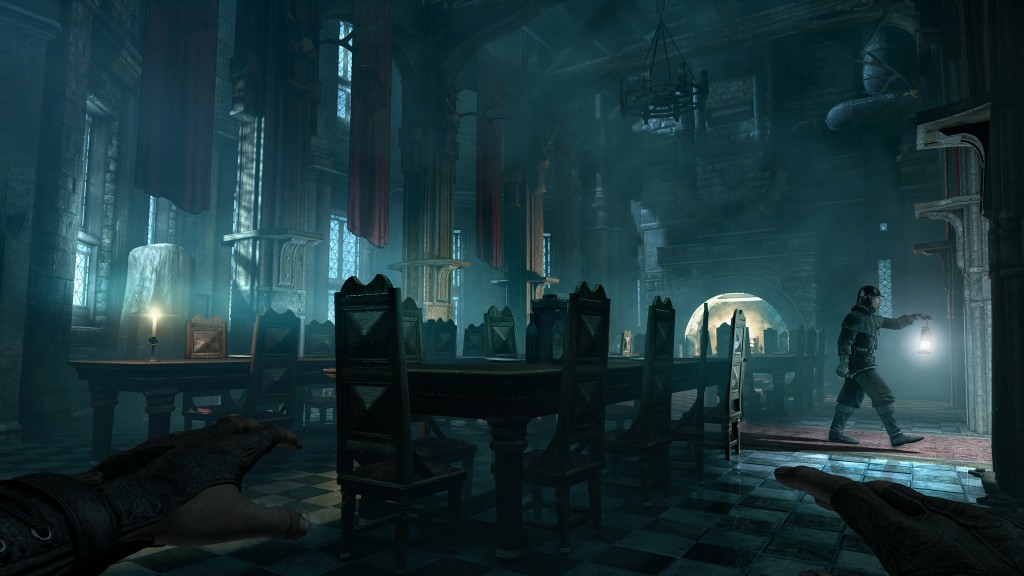 The missions and side jobs Garrett will take on typically involve slipping into an area to obtain specific items, sometimes with the stipulation that you cannot be seen or are not allowed to harm anyone.  The handful of tasks I pulled off during my short time with the title were thrilling and well designed, with each requiring a fair bit of exploration to reach the goal. Using an Xbox 360 controller, holding down the left trigger will allow Garrett to sprint as well as scramble up terrain or leap over gaps in one steady flow.  This first-person free-run looks fantastic in action — Garrett clamors up walls, grabbing footholds and using his blackjack for leverage and really makes you feel like you’re in the middle of the action.  While the section of the game we were shown was a blast, it was essentially a demo custom-tailored to show the game’s mechanics and we couldn’t really get a feel for the narrative.  That said, the Victorian-era world Thief is set in is so immersive that I found myself immediately absorbed in the atmosphere the dev team had created.  The ambient audio and subtle effects give the environment a very natural, realistic vibe while the AI’s ominous presence and fear of being spotted makes for a wonderfully tense experience.  I actually had to go back for a second stab at the game after my first lengthy session, just to see if I could find new, more efficient routes to the target areas and, frankly, because I had such a great time playing it. 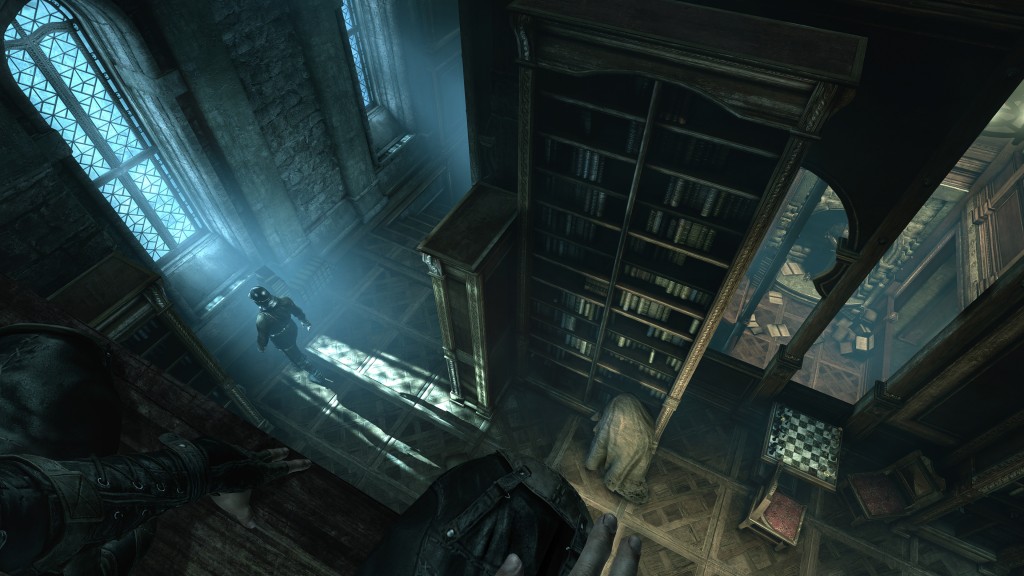 As the title is still over four months away from its February 25, 2014 release, there were expectedly a couple bugs in the demo that we ran into but the developers are busy routing them out and polishing the game to perfection.  Launching simultaneously for Playstation 3, Playstation 4, Xbox 360, Xbox One, and Windows, Thief is shaping up to be quite an impressive title and one that I can’t wait to get my hands on when it launches next year.