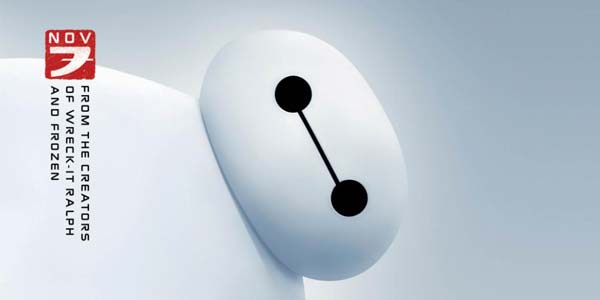 FINALLY– the Disney movie with drunk robots and street fighting kids we’ve all been waiting for!

Despite Marvel’s Joe Quesada and Jeph Loeb being strongly involved in Disney’s big screen adaptation of Big Hero 6, the New York Comic Con panel on the movie proved it will be quite different than its comic book source material.  But Big Hero 6 will also be a big change for Disney cartoons, pushing the envelope in some (I think) exciting and interesting new ways.

The story follows Hiro Hamada, a genius inventor who’s kind of a misfit.  That’s nothing new, but Hiro isn’t just socially awkward or longing to fit in… he starts out as a criminal!  The robotics whiz makes a name for himself squandering his considerable talents designing robots for back alley street fights, something voice actor Ryan Potter described as “Not quite legal.”

But while there’s six heroes in this movie (obviously), it’s Baymax the medical robot turned mechanical warrior who’s likely to be the breakout star.  And after seeing some of the scenes shown at NYCC, that stardom will be well earned!  When he’s dangerously low on batteries, Baymax essentially gets drunk, as Hiro attempts to wrangle the stumbling, slurring robot to his power station unnoticed.  It’s a great moment filled with some well done physical comedy, and Scott Adsit’s Baymax voice makes fall-down drunkeness more adorable than it’s ever been before.

Bear in mind, this is all in a DISNEY movie!

Maybe I’m overreacting, but I find all of this kind of awesome, especially because it all works so incredibly well on screen.

The other cool takeaway from the Big Hero 6 panel was a scene which shows Baymax will wear multiple armors in the movie… while his “final form” red armor has been getting most of the promotional attention, he totally rocks a green samurai style armor, complete with big, tubby belly armor, too.  I guess that’s not as extreme as drunk robots and boy criminals, but it’s still kinda cool.

If you couldn’t be at NYCC today, you can catch Big Hero 6 in theaters November 7th… and see the all-new sizzle reel screened at the panel below: