NYCC 2014: Genres Collide in Young Ones 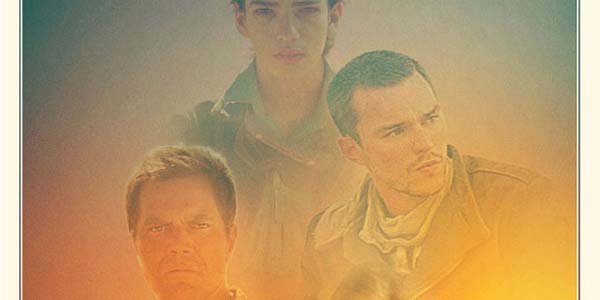 Young Ones is a movie that’s going to try to be many things– a classic Western, a post-apocalyptic sci-fi story, an environmental cautionary tale, an anime and a high stakes drama, but more than anything it’s a love story, between a father and his son.

The movie tells the story of a family in the not-too-distant future, living on a farm after a global drought has robbed the Earth of most of its water.  The world previewed in what director Jake Paltrow showed at New York Comic Con suggests a different kind of dystopia than we’re used to seeing in sci-fi.  This isn’t post-apocalypse, per se, but a regression to a Wild West type of life, a stylistic choice that actually makes some sense– I can see how these life dynamics would organically change were this to happen in real life.

That realism is key to Paltrow’s vision– he wanted to focus on extrapolating real world developments of today into the of how these problems affect tomorrow.  Hence, the drought as establishment for this world’s dry, barren landscape, and the use of robots to replace animals, especially to help with hard labor, inspired by the “big dog” robotics being researched now.

In Young Ones, it’s not a dog but a robot mule that kicks things off– Jerome (a surprisingly grown up Kodi Smit-McPhee) is a young man living with his family (Michael Shannon and Elle Fanning) on a failing farm, who purchase a robotics donkey when their real-life work animal dies.  This decision wipes out the last of father Earnest’s savings, and sets off a dangerous and violent series of events which unfurl as the movie progresses.

Despite the grounded sci-fi environment and the heavy Western influence, Paltrow made a point to keep his story as human as possible, keeping the focus on the bond between this father and son.  In that respect, he said he was inspired by the writing of S.E. Hinton, specifically Rumble Fish.  When he first started working on this project, Paltrow asked himself what a Hinton sci-fi novel would be like, and that became his inspiration.

Based on the footage we saw, The Young Ones could be a very interesting addition to a year that’s been great for original and thoughtful science fiction on the big screen.  I like how subtle and un-flashy the more fantastical elements of this movie look to be, and Paltrow and his cast were very clearly all committed to his vision for the story they were telling.  Young Ones hits theaters and Video On Demand on October 17th.