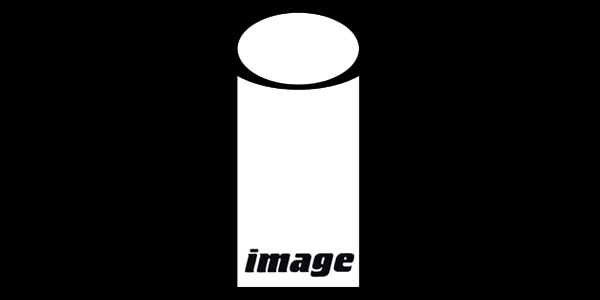 Having panels every day of the convention, a large booth near the center of the floor and getting some of the hottest creators in comics releasing stories with them, it’s clear that Image Comic’s I is truly for Impressive.

Image Comics had quite the presence at the New York Comic Con this year, having a panel for their creators all four days of the convention. Following the branding plan that we’ve seen in the ads the past few months, Image held I is for Immersive, Infinite, Impact and Inventive panels. Due to scheduling conflicts and the overall size of the convention, I only made it to the Thursday and Friday sessions, but there was still a lot to be learned. 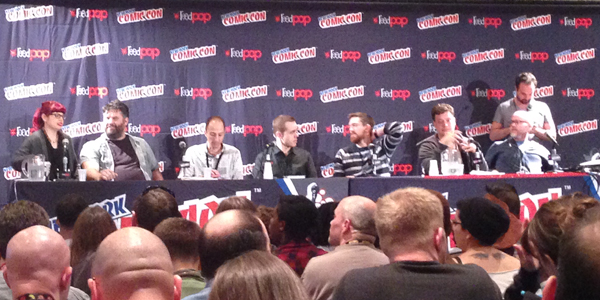 Thursday’s panel was the I is for Immersive panel, and featured the likes of Kelly Sue DeConnick (Pretty Deadly), Jason Latour (Southern Bastards), Jamie McKelvie (The Wicked + The Divine), Brandon Montclaire (Rocket Girl), Kyle Higgins (C.O.W.L.), and Tim Seeley (Revival). The creators each took a moment to familiarize the audience with their current series, as well as give a little insight as to where they’re heading next. The panel focused on the worlds that these comics build, and how a good setting engages the readers and makes the stories feel more comfortable. Such as Latour and the Southern Bastard story, with the story taking place in a very realistic looking Alabama town. Once the setting feels like it could exist in the world, it gets extended to hyper reality to accentuate the grittiness of the story. However, for Montclaire’s story Rocket Girl, the setting is in the 80’s style of the future, so there are some things in the setting that feel familiar, but it still carries the same dated futuristic feel that the story does. Other notable information includes the upcoming C.O.W.L. #6 will be a throwback style issue, with the comic and all the ads in a 1960’s motif. Also, The Thrilling Adventure Hour podcast will be releasing books that feature their characters. 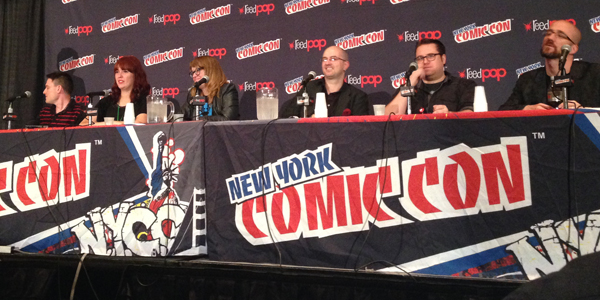 Friday’s panel was I is for Infinite, as in the infinite amount of possibilities for story ideas. The panel for this talk included Kieron Gillen (The Wicked + The Divine)  Antony Johnston (The Fuse/Umbral), Megan Levens (Madame Frankenstein), Amy Reeder (Rocket Girl), Scott Snyder (Wytches) and Joshua Williamson (Nailbiter/Ghosted). The creators on the panel represented the wide array of genres currently being released by Image Comics. Again, each of the creators got a minute to talk a little about what their series is about, and to tease the audience with where they’re headed. It was very interesting to hear the contrast between Snyder and Williamson talk about their horror books and Gillen talking about his pop sensation. 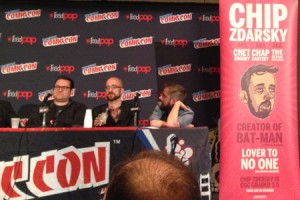 My favorite bit from this panel had to be the last minute inclusion of the hysterical Chip Zdarsky (Sex Criminals) with his one man convention banner. Poor Kieron Gillen had to try and talk over Chip claiming to draw under the pen name of Greg Caputo. The jist of this panel is that we can expect to see more stories that span genres as the anything goes mentality of Image progresses. Who knows, maybe we might even see some of the crossover ideas that came out during the Q&A session (Wytches + Southern Bastards would be a very interesting one).

Saturday’s panel was the I is for Impact panel, which included Frank Quitely (Jupiter’s Legacy), Wes Craig (Deadly Class), Matt Fraction (Sex Criminals), Steve Orlando (Undertow), James Robinson (The Saviors), Roc Upchurch (Rat Queens) and Brian K. Vaughan (Saga). The concept behind this panel was that all these creators are developing non-traditional stories, especially for the comic medium, that despite being weird or different doesn’t make them any less engaging or in demand.

Sunday’s panel was the I is for Inventive panel, which featured Nick Dragotta (Howtoons), Otis Frampton (Oddly Normal), Chris Giarrusso (G-Man), Sina Grace (Penny Dora) and Fred Van Lente (Howtoons) talking about how all-ages comics are crucial to the comics industry and can be an great tools to help kids with education as well as entertainment. Panelists also spoke about what it’s like to create comics for kids and how important libraries can be for spreading the appreciation of comic books.

It’s fairly obvious Image has a good understanding of what they’re doing and where they’re headed next. With a plethora of interesting titles, Image is set to make 2015 better than the previous year. We, the fans, can expect nothing less than excellence coming from this industry leading, creator-owned publishing company.