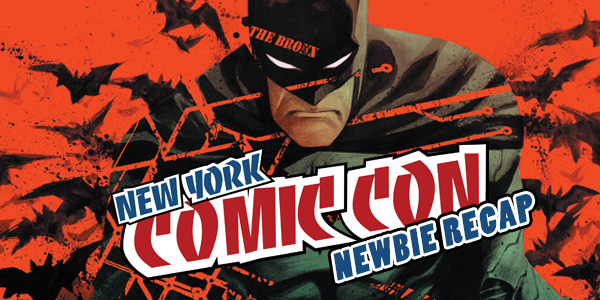 A first time attendee to the New York Comic Con recaps his experience and makes you jealous you didn’t go.

It’s Friday morning and I am unfortunately sitting at the desk of my day job, blissfully thinking back to a week ago, remembering all the people I met and things I saw. New York Comic Con was amazing to say the least. Having never been to a convention of that size, I didn’t know what to expect. Also, it was the first time I’d been asked to cover a convention, so I must admit I was a bit intimidated. We pulled up on the Javitz Center at 9:00 am last Thursday, and there was already a line that spanned a city block, filled with excited fans eager to get in the door. It was a little nuts, but you understand their intrigue pretty quickly, after you get inside. NYCC is a spectacle to behold. The convention floor is three times bigger than the Boston Con that I’ve grown accustomed to. Aside from comic books and movies, you can see so many different types of things for purchase while walking the aisles. Everything from an energy drink with the Punisher’s face on it to a broad array of sonic screw drivers. I was able to score some really good deals on books, as well as get some good input from the various publishers about what the next series to add to my collection should be.

Once I walked the entire convention floor, which took the better part of a day and a half, I thought I had seen all to be seen. It was about that time that I learned that I completely missed artist alley, which felt like a quarter mile hike down a long hallway, but it was a trip that needed to happen. Inside their own space sat hundreds of different artist and illustrators all ready to work on commissions and talk to fans. The most exciting thing for me was either talking with Paul Azaceta about the Outcast series he’s working on with Robert Kirkman, or meeting Eric Talbot, mostly known for his work on the Teenage Mutant Ninja Turtles with his buddy Kevin Eastman. My wife had bought me one of Talbot’s original Ink Creature pieces while out in Northampton, MA a couple years ago, so I was super excited to meet the artist behind the piece and get him to sketch in my book. Some of the artists are a little stand-offish and less eager than others to talk to fans, but for those who are as nice as we want them to be, it’s a real treat. Plus, I’m always a bit more eager to support them and purchase their goods when there’s a kind smile behind the name.

The panels at NYCC ranged greatly in size and subject matter. In addition to the indie comics panels I attended (which you can read reviews for here, here and here) I also got to sit in on some other interesting ones. I got to see the premier of next season’s Archer, and listen to a hilarious Q&A session with all the voice talents. I got to watch some clips from the new season of Bob’s Burgers and listen to how their cast gets along. One of the funniest things I heard was an audience member ask H. Jon Benjamin how he’s able to transition between the characters of Bob and Sterling, to which the audience began to snicker. Ultimately, we learned there was subtle differences all while having a good laugh. If you’ve never been to NYCC, my one bit of advice would be to grab wristbands for the big panels early. I was closed out of the Big Hero 6 panel, and didn’t get to see Mr. Dreamy Clooney like Bill did.

Nights at the con were something else. The first night, Bill was trying to go see a concert from the band that did the Pete & Pete theme music, so Jason invited me to see the new Keanu Reeves movie with him. I’m not the biggest fan of committing that much time to a show, but I’m so glad I went. Not only did we get to watch a hyper violent action thriller compliments of Lionsgate Entertainment but we got to meet Keanu Reeves and Alfie Allen after the movie for a brief Q&A. This was very fun, but nowhere near as excellent as the Adult Swim after party that took place on a yacht on the Hudson River. They provided food, some dance music and a unique look at the Statue of Liberty, but the real treat was their surprise musical guest. Run the Jewels, the rap group comprised of Killer Mike and El-P, put on a fantastic performance and rocked the yacht full force. It was the first time I got to see them play live, and it ended with a big sweaty high five from Killer Mike. I may never wash this hand again…

New York Comic Con 2014 was exciting, exhausting and amazing. I got to meet Kevin Smith. I got to interview Joshua Williamson about his Nailbiter series. I got to see amazing costumes and pay way too much for a slice of pizza. But that’s the whole point. Bringing together all the fans, whether their interests are tv, movies, video games, toys or even the lowly comic book to share in a fanboy experience together. Sure, you may meet some weirdos. You might have to watch awkward guys with ponytails forcefully hit on girls. But it’s all part of the adventure, and the inside jokes you get after are well worth it. Needless to say, I am very thankful to the crew at Kastor’s Korner for giving me this opportunity. It was an experience I will never forget, and I am already anticipating what’s to come at NYCC 2015.