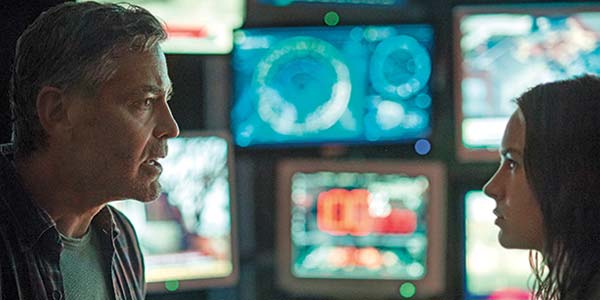 A scene from the highly mysterious Tomorrowland was screened at NYCC.  What did Bill think?

In addition to the debut of the first teaser trailer, Disney’s Tomorrowland presentation also shared an extended clip from the movie.  The footage– which surprise guest George Clooney convinced director Brad Bird and writer Damon Lindelof to show after he jokingly apologized for his turn as Batman– begins with what appears to be the first encounter between our hero Casey (Britt Robertson) after she tracks down embittered former inventor Frank Walker (George Clooney, channeling pure Robert Forester grumpiness).  The scene takes place at Frank’s seemingly ramshackle farmhouse, but as Casey soon learns as she attempts to come inside, Frank isn’t as retired from the inventor’s game as he would seem.

Eventually, the scene escalates as strange robotic henchmen invade the house, allowing Frank to deploy more of his delightfully homegrown booby traps to escape their clutches.  We see a souped up fire extinguisher that’s actually a freeze ray, a metal circle that can generate a portal to another dimension (which half of one of the bad guys gets caught in, leaving his legs walking around with no upper half in an inspired visual gag).

The villains, meanwhile, sport some much more streamlined high tech weaponry, some sort of pulse rifle which packs a serious punch. I have no idea who or what exactly these guys are, but they most definitely mean business.

Everything on screen during this clip suggests Tomorrowland will deliver some great, pulpy science fiction hidden just beneath the surface of the “real” world, which is probably where the Harry Potter comparisons are stemming from.  I’ve always been a huge fan of this sort of comic book-y super science, so watching Frank and Casey escape in a tub that transforms into a rocket ship left me with a huge smile on my face and a lot of interest in seeing more of the world of Tomorrowland.  I can’t wait to see more!