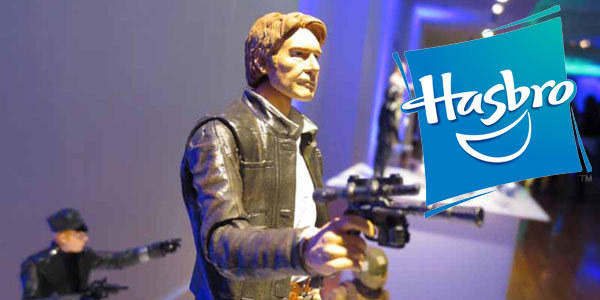 The Star Wars brand team from Hasbro sat down for an in-depth discussion about the advances over the years in their toy version of the galaxy far, far away and much more.

Not long after their exciting panel at New York Comic Con, the Hasbro Star Wars team of Joe Ninivaggi, Steve Bono, and Steve Evans sat down to talk more about their Force Awakens toy line.  Our exclusive conversation gave the team a chance to reflect at the dramatic changes the Star Wars toy line– and all toy lines, really– has been through over the years, as well as how they are approaching the huge amount of new Star Wars content that’s on the horizon.

KASTOR’S KORNER: From production costs to consumer behavior, there have been a lot of changes in the toy world since the last Star Wars movies were released over a decade ago. How do you think The Force Awakens toy line would be different, if it were created in 1999 instead of 2015?

JOE NINIVAGGI: It would be a lot different.

STEVE BONO: We were just in the early stages of digital sculpting at that point.  I was working on the line.  We had the same sort of system of getting reference, then sculpting in wax, which is how we did most of the figures at that point.  I think something like the Black Series 6″ wouldn’t have existed back then… I don’t know if we’d even have the bandwith to figure out how to do that, at that point.  It’s such a nice, premium, high-end series of figures.  We were focused more on delivering purely to kids, and less to collectors at that point.

STEVE EVANS: The time it would take to do that in wax, physical sculpting, we utilize a lot of scanning.  We’ll scan the actors in their costumes, and that gives us a great base to work from.  The guys still need to go in and chop a bit and make it toyetic, but you’re right [to Steve] we probably wouldn’t be able to do any 6″ at the time.  Just for the amount of characters at the time, and the scale of the release.  Whereas now we can get better efficiency from the way we produce and sculpt, better accuracy.  And there’s different materials– different materials then, and now there are different regulations and resources available.  We wouldn’t have Black Series if it were back in 1999.

SB: We were also working on CommTech then, putting the sound chips in figures.  That was a big difference, that was a big deal at the time, on Episode One.  We haven’t re-visited that technology for years and years.

JN: Now you guys are putting accelerometers and gyroscopes and motion sensors in toys.

SE: There would be less tech, less invisible tech.  The Comm chip, you saw it, and you had to get a thing that it worked on, whereas now the new lightsabers, we put an accelerometer on your phone inside it, so it’s all invisible.  That kind of fluidity of technology certainly wouldn’t have been around, that we use now and look to use even more, going forward.

JN: For consumer behavior, too, especially in the collector world, the advent of social media– in 1999 there wasn’t such a thing– so to get your feedback and have such an instant and direct dialogue with you, even from a marketing perspective, social media has been such a huge phenomenon for us to be able to celebrate a movie launch much differently even than we did for Episode Three.  Beyond the toys, we can interact with you guys and also learn from you and celebrate and market our products.

KK: In the past, Star Wars movies have been released three years apart, giving a long retail window for a specific movie to be a long-running theme of the toy line. But between the New Trilogy and Anthology films, we’re going to see a new movie every year. How does this impact the release schedule and scope of each movie’s toy line?

SE: We’ve got a lot to choose from, the kitchen is full.  Needless to say, we’ll focus on supporting the theatrical event of the year, whatever that may be, but we’re very conscious of ensuring that we pepper in, feed in, classic and Rebels.  And as we move past each tentpole movie, to pepper that in, to keep it going.  because there are characters we want to get to, and if we start and stop within that year, we’re not gonna get to those characters.  We’ve got more content coming in the next five or six years than we’ve had in the last thirty years.  Dealing with that is a challenge, but it’s a good one to have.

We just have to strategize– we do that with Lucasfilm, hand-in-hand. It’s like okay, what percentage of the line do we want to focus on the movie, we’ve gotta keep classics, is that more for collectors or kids, knowing all the fans want different things.  It’s a rare skill to do, and it’s through talk and dialogue and working with Lucas, but it’s possible.

KK: Would that rule apply to the new movies, as well? So say there’s characters from The Force Awakens that don’t get released this year, they’re still on the table that they could be peppered in, in the future?

JN: The dialogue gets bigger.

SE: You’ve gotta remember, there may be fluidity with the characters, going through the movie.  They may or may not change looks, I don’t know yet.  It’s an interesting time to manage.

I’m personally a huge fan of the 3.75″ basic figures, the 5 POA guys, especially with The Force Awakens, they are so cool and such a great extension of the old Kenner feel… I am one of the ardent defenders of them.  I get so much flak for doing all positive reviews of these things.  One thing I thought was interesting was both at the Hasbro party and the panel, you did not include any new additions to that line.  Is that something that’s going to continue more, because a new set– unannounced– just sort of appeared with General Hux and a couple other characters, that people are finding at Toys R Us.

SE: We are fully, deeply invested in 3.75″ with the 5 point articulation.  The way I look at it, and the way the team looks at it, we have the ability to bring these characters at a consumable price.  It will allow fans of all ages to buy more than one, to build and play, to be able to live out that fantasy.  And yes, there is a kind of homage back to the old Kenner days, it’s what they’re doing with the whole brand, this turnover of the classic saga to the new saga, the classic characters to the new characters, the parents that were there, who were kids then and now their kids are there now.  It’s a thought-about thing, so absolutely, yes.  There’s much, much more to come for 3.75″.  We announced some back at San Diego.

JN: We meant to reveal some 3.75″ figures last night [at the Hasbro party], but they were already leaked out.  People are very excited, as soon as they get their hands on them, they tweet them out, so we said alright, they’re out there now so let’s focus on other things.

KK: One increasingly common trend in many toy lines is a focus on only the core heroes, with little representation for supporting characters and especially villains and female characters. Star Wars has never really had this problem.  Why do you think that is?

JN: From the very beginning, that’s what the lore has been about.  There’s so many aliens and droids and creatures.  Star Wars is really unique in that respect, it’s the only lore that I can think of where the bad guys are just as important as the good guys, and the vehicles are just as important as the characters.  So I don’t know why it is, specifically, but it happened and it continues to be that, and it’s just part of the DNA of the brand.  It’s what fuels what we do.  In the very first waves of what we put out for the 3.75″ and the 6″, we already have Resistance Troopers, and Guavian Enforcers, it’s not just all about Rey, Finn, Kylo and Phasma.

SE: We definitely want to put color in, and I mean that from a character point of view. No one has seen the movie, yet there are all the toys, there are all the characters.  A kid will take Sarco Plank or someone like that and– is he good? Is he bad? I don’t know.  For me, he’s gonna be good!  They invent their own story. [The toys] are tools for imagination and storytelling, a kid could do whatever they like.  It’s a big enough galaxy for kids to have permission to create and re-create, and tell their own stories.  They resonate.  It’s okay to have a weird alien that you may or may not know, because he or she may be the hero for that play session.

JN: There’s something for everyone, that’s why it’s so broad.

SE: Hammerhead was always my hero.