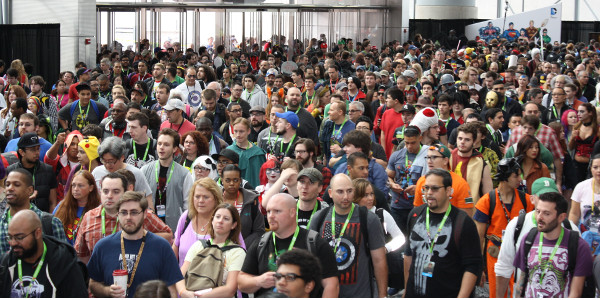 When did a comic convention turn into so much work??

I just finished my 10th New York Comic Con, and quite honestly I’m exhausted! For most attendees at the con, you go, you have fun, you spend some cash and…you go home. But when you do press for a website? The process starts months before the actual con arrives.

The whole process begins with the press pass. As the years go on, acquiring a press pass is getting harder and harder. You have to apply for a press pass (in this case Reed Pop’s NYCC). Part of the application involves showing samples of your work and your site’s traffic. Basically, you have to prove that you and your site is legit. It’s all part of the process and, honestly…it’s the easiest part.
Now comes the hard part:

The flood of emails from companies attending the Con is the first part. As it gets closer to NYCC, I end up with about 100 PR emails a day. It’s my job to sort through all these emails and figure out what applies to my site’s demographics.

From there, I have to pull all the necessary info from the email (including images and verbiage) format it all and get it posted in a timely manner. The main goal is to be the site to have the info posted first. It’s a dog eat dog world out there, and it’s not an easy task. The thing is, this flood of emails doesn’t end until days after NYCC. Until then, it’s madness at times.

Then comes the schmoozing part. And at times, it’s the part that really drives me up the wall me off. Why? Two words: press rooms or press panels. What’s a press room? Basically, it’s where various media outlets (that are attending NYCC) give the press a chance to meet the talent and producers of a particular TV show (or movie) in a small roundtable interview. To be honest, they’re actually pretty cool. But actually getting into some of them? That’s the real work for press sites like ours.

The smaller sites (your non-Entertainment Weekly/MTV sites) have to really work at getting into the rooms. Obviously, some companies are more responsive than others, but either way, you have to stay on top of them to make sure you make the cut. Without all the leg work, we put into getting into the room you can get shut out like we did on some rooms this year.

There are times that press reps are on top of things getting back to us quickly, but there are also times when the yes or no can literally be an hour before the interviews. It is a hard game to play, and at times we have to prioritize where we put our efforts based on personal relationships with the outlets, the size of the show, and just plain main manpower. If we don’t have the staff sometimes we have to cut out of a press room or give out space up to others waiting for the opening. We can get frustrated when we are waiting to hear, to find out they filled the room and did not let us know until we asked, but end of the day it all part of the game. There are times we get into the big rooms with all the big outlets, fighting for our questions to get answered, or get the lucky one on one with a big actor. End of the day it can be amazing and soul crushing doing these rooms, but always worth it.

Now that all the PR has been posted and the appointments have been made it’s time to hit the Con. Doing this for so long, I’m starting to think that the huge crowds of people there are just getting to me. I lost track of the amount of times I was almost knocked over. And the cosplayers who just stand in the middle of things, blocking the flow of traffic?!?!? Rrrrrr…I have a back to back schedule and need to get to places, maneuvering my way through the crowds is definitely getting to be a struggle.

Of course, having a back to back schedule leaves me very little time to actually hit the floor and buy anything for myself. And with those few and far “between free moments” I have to use to make sure I say hi to all the companies I deal with on a daily basis. This is the part I love, though. I only get to see these guys maybe once or twice a year, so it’s really nice to catch up with them.
It’s all a ton of hard work with a heaping spoonful of aggravation on the side.