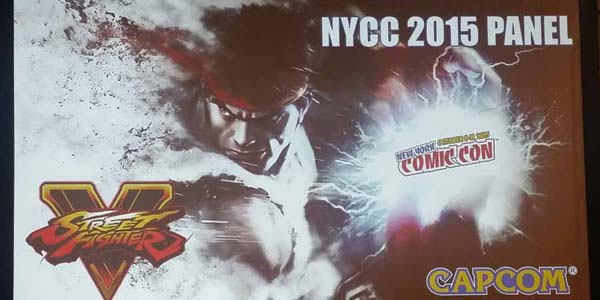 Capcom’s dedicated Street Fighter V panel was another exercise in fan hype and appreciation for the venerable brand. They filled the hour with the game’s latest updates, upcoming product in conjunction with the game’s release, and even a mini NYCC battle Royale for a chance to win a custom PS4. If you are a gaming fan and haven’t been to one of their panels, you are missing a feel-good time.

Moderator Francis Mao started off the festivities by thanking the fans in New York City for their love and tireless support of Street Fighter V, making a particular mention of the crowd’s respectful nature. I suppose the warmth and comradery are apparently lacking in the left coast (hint hint San Diego Comic Con attendees). What followed was the newest trailer for Street Fighter V, marching confidently to its Spring 2016 release. The graphics improve on Street Fighter 4 using the Unreal Engine 4 technology, boasting the best character models to date. The fight still takes place on a 2-D plane, but the interactive stages and animations during Critical Arts help make the 3-D models pop. Fans were playing the latest build all weekend, so it was more of the same for the audience.

Next came word of numerous licensed products coming soon. For standouts on the figure front, Mattel is making Beyblade-esque Vs Battlers, Ultimate Source’s Street Fighter IV figures may finally find a home, and previewed were the popular Kotobukiya Bishoujo Statues of Ibuki and a Con-exclusive Sakura. Big Boy Toys has an excellent chibi PVC fighter T.N.C. (The New Challenger) collection. Each character comes pre-posed with character-specific backdrop dioramas, stage, and LED light and Sound FX for their signature attacks. Ryu is T.N.C-01 with light-up Hadoken and coming soon is Ken with his fiery Shoryuken attack. Brain Wave’s Generation Series is releasing a newly recorded and remastered Street Fighter 2 arcade soundtrack in both CD, vinyl, and digital download. The 3-disc album will also include archival art, commentary and composer interviews. More information can be found on genseries.net. 8-bit Art wishes to liven up your dull wall with pixel art kits. Plaster your desired Street Fighter character on the nearest bedroom wall today. Eighty-Sixed Clothing, Fusion Fight Gear, and Blue Marble Apparel has game-centric shirts you can wear such as your favorite World Warriors. Udon once again provides a feast of the eyes with a new Street Fighter Unlimited monthly comic, as well as more of their popular art books. Madcatz re-introduced their Arcade Fightstick: Tournament Edition 2, essential for any dedicated fighting game fan. This expensive piece has convenient versatility, usable one both the PS3 and the PS4. This is very welcome news for folks worried about having to purchase a new stick for Street Fighter V. Funko Pop Vinyl, custom skateboard decks, and plush fireballs rounded out the presentation (and fans were not quiet in their jubilation).

Onto the game itself, it will be released in Spring 2016 for $59.99. The play action and features were detailed, but unlike previous releases, all balancing and system updates will be done free of charge. This entry will not have a Championship Edition, Ultra version, or any other micro-sequel; this disc will be the only one you will buy. All post-launch gameplay content will be FREE, earnable by the old-school tactic of simply playing the game. With a well-documented reputation of “stealing” people’s money by selling disc-loaded content as DLC, this was music to our ears. Capcom has been listening well to consumer feedback. Another new and unprecedented feature will be online Cross-platform play. For the first time, someone on a PS4 can play against a player on the PC version of the game! After Francis introduced the New York stage and Brazilian Jiu-jitsu fighter Laura, Executive Producer Yoshiori Ono then surprised the crowd, came out, and selected 4 lucky contenders for a mini-Battle Royal. The winner walked away with a custom PS4, but the losers were given consolation prizes for their efforts.

If you are a fan of the Street Fighter franchise, do yourself a favor and watch one of Capcom’s wonderful and entertaining panels, either live or on Youtube. The hype and energy is unreal. Their merchandise always seems to hit the mark (if only on had room for it all). Between fighting game accessories, toys, artwork, figures, music, and clothing, every base has been covered. If the presentation wasn’t exciting enough, the tournament that followed cranked up the pandemonium to unforeseen levels. As I can personally attest as a participant, you really have a tough time playing best 2 out of 3 when a room full of screaming fans yelling at you and with you at the same time. I had a great time, walked away with a Shadoloo pin, and spent the rest of the day licking my wounds upstairs while improving my game with Laura. A big thanks to Francis Mao and all the hardworking folks at Capcom for always delivering the wildest and most fun booth every year. 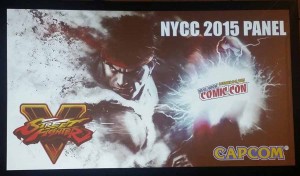 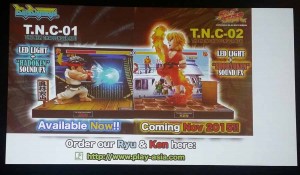 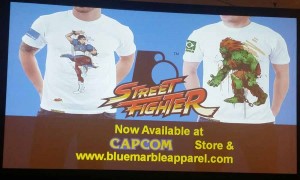 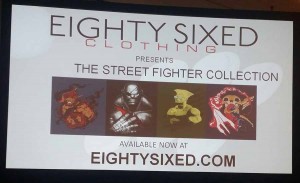 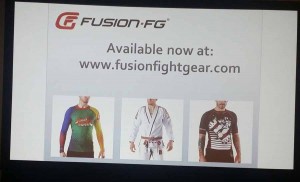 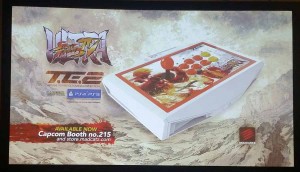 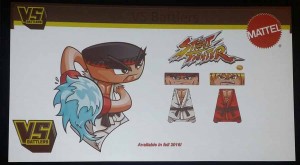 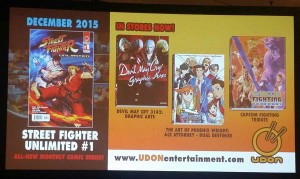 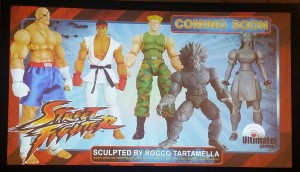 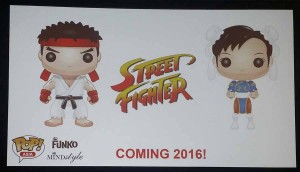 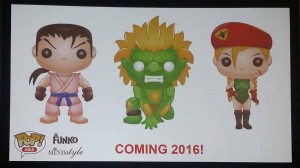 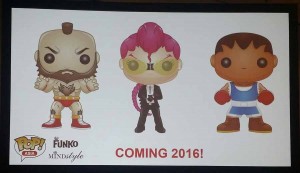 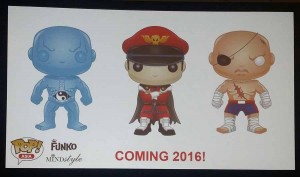 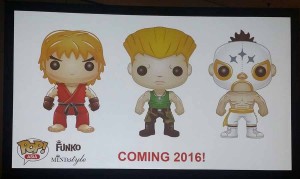 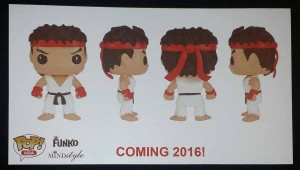 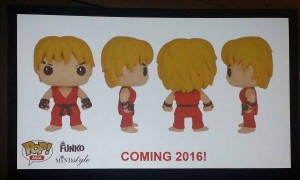 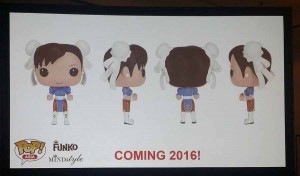 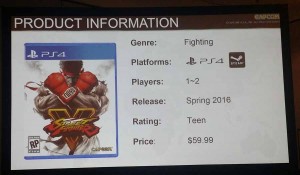 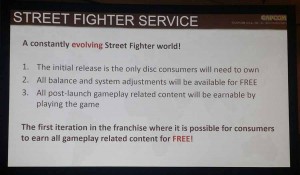 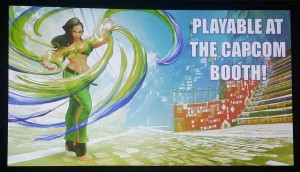 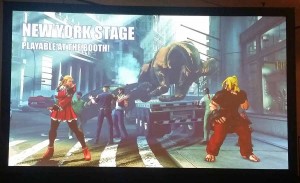 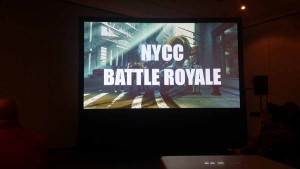