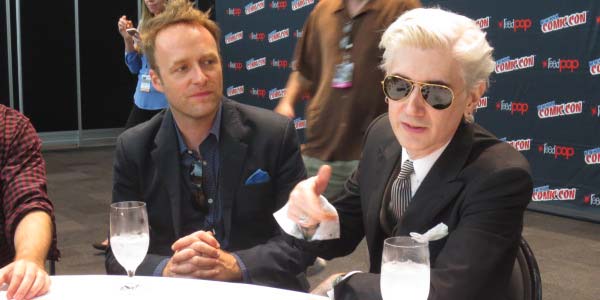 The Venture Bros– better known in real life as Jackson Publick and Doc Hammer– are New York Comic Con mainstays, and this year they offered not only a great preview of the upcoming sixth season of the best show on Adult Swim, but lots of insight into their creative process.

The Venture Brothers Season Six Sizzle Reel was action packed and quickly ran through the cast of characters expected to return. However, keeping with the main teaser part of the trailer, good things come to those who … … wait.

During the Venture Bros panel, Jackson and Doc disclosed that Season Six, which will debut on Adult Swim in January 2016, will pick up just moments after the Season Five finale.  After the events of the hour-long special “All This and Gargantua 2,” several supporting characters are apparently dead.  While Jackson was coy when it came to confirming The Sovereign is truly gone, Jonas  Jr. is dead. Like, dead dead. And they had fun killing him off, and he will stay dead unless the duo comes up with some crazy idea for him not to return… though that’s not really something they’re looking for.

The death of Jonas Jr. leaves Rusty as the heir to the once again considerable Venture fortune, which is one of the big shake-ups of the new season.  This doesn’t mean the running theme of failure will be gone in Season Six, however… although Doc had a different perspective on this frequently-used theme.  “The show is about failure only because we wrote a show, then looked at it and said ‘Wow, this is about failure.’ We never set out and said ‘Let’s do something about failure.’  We registered that it was about failure, and pulling that out is impossible, because that’s kind of what is funny to us,” he explained during Adult Swim’s press conference.  “And failure is a big, beautiful thing.  It’s not just going ahead and not having it done, if you’ve never had failure in your life, or not learned to deal with failure, you’re a monster.  I don’t know you.  So failure is really about life, so when we say the show is about failure, what we’re saying is, the show is about their lives.  And we think about the fact that life does not go as it’s supposed to be planned.  We’ll never be able to drop it, until life learns to drop it.”

The Venture team is only half the dynamic of the series, and the villains– under the umbrella of the Guild of Calamitous Intent– have experienced a major shake-up of their own.  “That’s what you’ll learn in Season Six– what happens to the Guild?” Doc teased.

“We don’t kind of address that?” Jackson asked.

“–Start again.  But we don’t really address it.”

“But we do learn The Monarch– nope.”

“You see the makings of the new Guild there, they have some changes to go through,” said Jackson.  “They’re downsizing and re-forming a bit.  We cover  a lot of that in this new season.  More at the beginning than in the middle, once we got caught up in our other stories, but it’s kind of there the whole time.”

All these changes doesn’t leave much time for some other beloved characters, and Jackson and Doc admitted fans of the Order of the Triad will be in for a wait, as the mystical team won’t be surfacing in the eight new episodes.  But Doc and Jackson know where they are, and it seems a safe bet that Doctor Orpheus and his allies will return eventually… as will ORB.

In some alternate reality, though (possibly opened accidentally by Rusty), Doc and Jackson could have dabbled in the mystical arts on a much bigger scale, had Marvel chosen their pitch for a Doctor Strange movie.  “It would be slightly funnier than it’s probably going to be.  It would be a LOT darker,” Doc said.  “My idea of Dr. Strange is that he is a monster, like, the worst person on the planet.  His wife dies, and he’s like, ‘I just want to be able to perform surgery again!’  He’s a complete asshole.”

“Also, this going to Tibet nonsense?  No, no.  That’s ridiculous, it’s such a 60s kind of thing– Let’s go to a foreign land, where people are different and they have magical powers,” he continued.  “No, he’s an occult guy, he gets right into the ugliness of human sacrifice and the underground, really ugly stuff.  ‘I just want my hand to work better, so I can make more money.’ It’s really a selling yourself to the devil kind of premise, than going and getting secret information from Tibet.”

Sure, that would be amazing to see, and in its own way could carry on the Venture Bros tradition of self-absorbed man children, surrounded in their lives by more competent, emotionally stable women.  That’s not necessarily by accident.  “It’s two male guys writing the show,” said Jackson.

“And it’s a mommy-less universe, there’s a lot of mother problems.  And I think when you have that issue, which is something that resonates within both of us, you start doing that,” Doc continued.  “Also, in my life, when I have the rational people that are actually guiding me, they’re almost always women, so I naturally roll it in to [my writing].  Most of my very close friends– present company excluded– are women.  It just happens, and it’s a better foil.”

“I mean, the men are such infants,” he said.  “If you pair them up with anybody… that happens with Billy [Quizboy] and [Pete] White– two men– one is going to be responsible and the other is going to be irresponsible.  I think it happens in all our pairings, unless they’re poorly constructed… like Watch and Ward!  It’s a poorly constructed pairing… but were we to give them an episode, you’d find out that one of them is not that good at his job, and the other one is better at it.  That’s just pairings.”