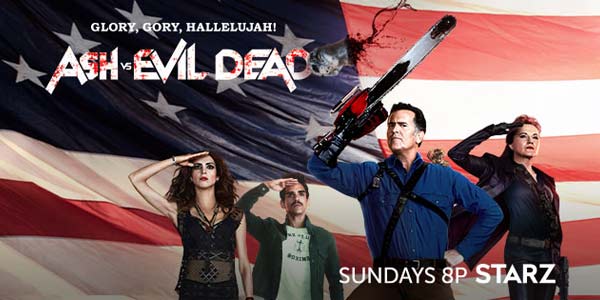 Like a bloodthirsty demon from the depths of the Necronomicon, the second season of Ash vs Evil Dead has been unleashed on Starz, and the cast of the series offered plenty of insights and previews at New York Comic Con.

Ash vs Evil Dead is in the throes of its second season on Starz, and– whether you’re into this series because it’s bringing something new to the Evil Dead saga, or just in it for the schlock and gore– this show is certainly not experiencing any kind of sophomore slump.  The second season has been funnier, scarier, and more outrageous than virtually anything we’ve seen thus far in the Evil Dead mythos, and when we spoke to the cast at New York Comic Con, the big takeaway was that the best is yet to come.

One of the first shifts in Ash vs Evil Dead Season Two is changing the setting, from a road trip story to setting up shop in Ash’s hometown of Elk Grove, Michigan.  Bruce Campbell said this change of setting was a key turning point in Ash’s development.”We never saw his hometown,” he said. “Ash was like a teacher, we never saw him after school… Now you can go Joseph Campbell, you can start getting [to a] big, epic story. Ash is foretold in an ancient book, he’s not just some schlub in a motor home. The guy’s got something else going on [and] we’ve gotta find out what that is.”

New castmate Michelle Hurd– who plays Ash’s former flame Linda B.– agreed that the new setting opens up new possibilities for this ongoing story. “What you’re gonna get this season is, you’re gonna get to learn about [Ash’s] backstory, where he came from, his father, his best friend Chet… the person who plays my husband was his nemesis in high school, and is now the sheriff… I think it will be very interesting to see where Linda B. goes.”

Of course, one of the biggest changes Ash vs Evil Dead has delivered to the overall story is that Ash is no longer a ‘lone wolf’… he’s got a pack now.  And Ray Santiago’s Pablo and Dana DeLaurenzo’s Kelly hinted that their characters’ evolution would be getting even crazier and more interesting this season, as well. “After birthing demons out of my mouth in Season One… he’s definitely suffering the trauma of what happened in the cabin, and there is an undeniable connection to the Necronomicon,” Ray explained of Pablo in Season Two. “At the end of Season One, I think Pablo will be a forever-changed man, in the way that Ash was in the films. He lost his hand, he’s forever different, and I think Pablo goes on that kind of a journey this season.”

Dana, meanwhile, was more focused on the visceral experience of the new season, which amps up not only the character dynamics but– as one would expect-slash-hope in the world of Evil Dead– dials up the gore and grossness, as well.  “I have to say I’m very excited about this season, because– in the first scene alone– I had 26 gallons of blood blasted in my face,” she recalled. “That sets the bar for Season Two, so I think you will see plenty of blood and gore and goop.  They got real creative this year, with what they were throwing on us.”

Lucy Lawless’ Ruby quickly became one of last season’s most intriguing characters.  She had obvious connections to both Ash and the Necronomicon, but where she landed in that ongoing war between the living and the dead was left up in the air. Practically speaking, most of Season One saw Ruby doing her own thing, separate from the majority of the cast, and Lucy is happy that is changing quickly in Season Two. “It was a great relief to finally come into the group,” she said. “[Ruby] is gonna get hot and heavy with Pablo and Kelly. They’re going to worm their way into her rotten apple of a heart.”

Another pseudo-antagonist of Season Two is Brock, Ash’s estranged father played by Lee Majors. The veteran actor approached being the dad of one of the most iconic cult heroes in pop culture in a pretty obvious way. “If you look at the character of Ash… that’s him, that’s the way I arrived at the character,” he explained of Brock. “I said ‘Let me look at the first season of the show.’ And I sat down and watched the ten episodes like that [snaps], and I said it was batshit crazy, and funny! I don’t know how you could saw somebody’s head off, then throw off such funny lines… [but] put both of them together, they’ve got a real energy.”

The new season in Ash’s hometown also introduces our hero’s former best friend, the afformentioned Chet. Played by Evil Dead veteran/ mascot Ted Raimi, Chet promises to bring a whole new, appropriately ridiculous energy to the ensemble. For Ted’s part, he was happy to see Ash vs Evil Dead move beyond the B-Movie grind of its cinematic predecessors. “You’re shooting a drama schedule, with a horror concept, and it’s weird,” he explained. “[If] you’re shooting a horror movie, they’re always low budget… it goes til 4 o’clock in the morning because you have no money.  Here, everybody goes home at 7, because it’s New Zealand, and nobody works past 7 o’clock. It’s the weirdest horror-making ever– you actually have a night to yourself, every night!”

Despite the great new cast of supporting characters, it’s hard to deny this series still shines the brightest spotlight on Bruce Campbell, and he’s happy to revisit this character, who’s proven to be far more layered in this current format than he ever appeared on the big screen. “[Ash] has to be a hero and he has to be a villain, all at the same time,” Bruce said. “He’s a very, VERY flawed hero… he swears, he drinks, he smokes marijuana, in Season Two he smokes angel dust… the guy is a piece of work, and I love every minute of it.”

“I’ve done the hero thing [with] ‘The Adventures of Brisco County, Jr,’ [where] Little Billy got the medicine, he kissed the girl, he doesn’t drink, he doesn’t smoke, he has no bad habits whatsoever.  I played that guy, and that guy’s fun to play… for a while,” he said. “But I’d way rather play a guy who’s got some serious issues. [Ash is] the best character I’ve ever played, because we’re fleshing him out past the two-dimensional, smarmy-talking guy… He was the wrong guy for the job 25 years ago. Now he’s REALLY the wrong guy for the job; that, to me as an actor… now I’m interested, playing that character.”

So what comes next for Ash vs Evil Dead Season Two?  Ray’s answer reached all the way back to his initial auditions with Sam Raimi, over a year ago. “Sam [Raimi] said, ‘Are you prepared to do X-Y-Z?’ and he sat me in a room, right before my last audition at Starz, and said ‘This is what’s gonna happen, are you ready?’ And I looked him in the eyes and said what I was down to do,” he recalled.  “I said I would run completely naked through the wilderness of New Zealand… and he made it happen. Be careful what you say!”

On a more serious note, Ray admitted he feels Pablo serves a bigger purpose than just being Ash’s sidekick. “I have the opportunity to portray a positive role model of a Latino on TV, and we don’t really see that too often,” he said. “I’m glad that after jumping from show-to-show as a gangbanger and a drug dealer, the world has lead me to Ash.”

Ted, a long-time horror genre staple in his own right, felt similarly inspired by Dana and her role in the series. “Horror stars that were female, were always secondary. As far as fans were concerned, no one ever cared,” he said. “You may, sort of, have known Jamie Lee Curtis in 1978 from her work in ‘Halloween,’ but what you’re thinking about is Michael Myers. Now, Dana– just walking out from this Con center– is mobbed with fans, and it’s crazy! This is where horror is now, it’s wonderful. When you get a great story and a great actor, like Ms. DeLaurenzo, you will find those two things come together.”

Ash vs Evil Dead catapulted this cult classic franchise into the TV medium, which is experiencing a sort of golden age in terms of horror shows. Bruce had a few thoughts about why we are seeing this intriguing migration to the small screen for horror as a genre, and where he sees things moving in the future. “This is just a genre that caught on. It’ll die down, like every other genre, but horror has always been one of the main genres that will never go away,” he explained. “You know, Westerns pop up every so often– everybody does a Western, then they all die and people go ‘Fuck those Westerns’ and they won’t make any more for ten years– then Kevin Costner will make a Western, or Clint Eastwood will make a Western. So, genres pop up, get hot, and then die down. Thankfully, because of ‘The Walking Dead,’ they’ve helped bring horror mainstream. So, horror has come out of the shadows, as a result. It’s no longer that you whisper ‘I did a couple horror movies.’ As an actor, you put it right on your resume now. ‘Fuck you, it’s as valid as any other genre.’ And it is… it’s one of the few genres that can get an audience viscerally engaged. Comedies are the only other genre [where that can happen].”

Seeing as how Ash Vs Evil Dead nails it in terms of both horror AND comedy, it’s little surprise the series has caught on in such a big way.  Ash vs Evil Dead Season Two is airing now on Starz, with new episodes every Sunday night at 10pm.

Hear more from the Ash vs Evil Dead roundtables at NYCC below: