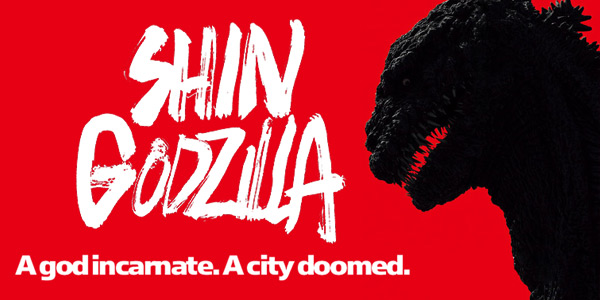 Shin Godzilla smashed its way into New York City for Comic Con… did the ultimate Kaiju make its mark?

A giant monster emerges from the murky depths of the ocean and soon begins laying waste to a seaside city. The army responds swiftly, but when their artillery proves ineffective they return to the drawing board and quickly devise a more coordinated, destructive attack in an all-out effort to destroy the monster. At least that’s how Godzilla’s origin story has usually played itself out, but in Shin Godzilla, writer/director Hideaki Anno invites audiences to see the difficult choices and crippling political bureaucracies that would come into play if such an event as the appearance of a giant nuclear lizard capable of destroying entire cities were to actually occur on Japan’s shores. Imbued with the pathos, dark humor, and apocalyptic grandeur that one might expect from the mind that created Neon Genesis Evangelion, the result is a film that blends tense strategy meetings reminiscent of those at NERV headquarters with the humorous bureaucratic detail of The Thick of It (minus the cursing) all while delivering the most fearsome Godzilla ever committed to film. The fact that it works so well is quite the achievement.

Though much of the film’s runtime is spent behind the scenes of the Japanese government as it attempts to figure out what to do — a potentially tiresome proposition — this proves not to be a weakness at all, as the ensuing drama reveals a political satire that lays bare Japan’s post-war position as international lapdogs for the Western world. Consider the fact that the Prime Minister has to call a board meeting to decide whether international treaties will allow Japan to use their own military to defend themselves against the monster. Or the fact that the United States seems to have more say in how to handle the threat than Japan does. Anno wisely chooses to approach much of the absurdity of the geopolitical situation with humor, and the jokes mostly all land even with American audiences. However, as the story progresses, an affecting nationalistic dignity reveals itself to be at the core of the film. This message is delivered in a direct way, and could be accused of being ham-fisted, but it’s far from overbearing and doesn’t bog down the film too much (it is mildly concerning that nationalism seems to be rising in all major countries at the moment, but that’s another story). The succession of scenes set in offices and boardrooms are helped along by the visual aplomb with which Anno approaches his subject. Not content with shooting things in a generic fashion (as anyone who has seen his previous work can attest), he always finds creative ways to frame his actors in order to heighten interest. As I watched the film I was occasionally reminded of Love & Pop (1998), an indie teen drama directed by Anno, which managed to add bold visual flair to what were small-scale scenes by perching the camera in interesting and unexpected places. Anno has matured over the years, but his boldness in the face of convention still remains.

When asked to take on the project, Anno initially declined stating that he felt it would be impossible to outdo Ishiro Honda’s original 1954 masterpiece. Though he’s right on the money with that statement, Shin Godzilla comes closer than any other film in this historic series ever has (and maybe ever will). Part of the key to its success lies in the sure-footed action direction from collaborator Shinji Huguchi which often pays direct homage to the iconic visual style of the original; shots of civilians fleeing from Godzilla are framed similarly to the original film, as are the many shots of the monster towering above skyscrapers as it rampages through the city. In keeping with this interest in respecting tradition, the Godzilla in this film was created through a welcomed return to puppetry and animatronics (with some digital effects to be sure), and it’s action scenes were shot largely on miniature sets. That’s not to say that this Godzilla looks old-fashioned. For my money, the animatronic Godzilla on display in this film is more terrifying than any that have come before it. Not content with simply giving Godzilla a striking aesthetic redesign and calling it a day, they’ve creatively imbued the creature with new and seriously horrific destructive capabilities that trump anything to come before in the series. This being a spoiler-free review, I’ll leave it to viewers to see and enjoy for themselves.

The action sequences in this film are few, but when they do arrive they hit with maximum impact and are delivered in total service of telling the story — showcasing the type of storytelling restraint and artistry sorely lacking in most big-budget fare. In fact, it is this type of artistic restraint that has made the original 1954 Godzilla still so effective to this day. There is no amount of CG and no budget so large that it can compensate for genuine artistry, and conversely, no matter the means used to put a giant city-destroying monster on screen, if it’s done with passion and in service of a good story it will draw the audience in to the point where they cannot see the strings or the man in the rubber suit — they willing suspend their disbelief. There is no doubt while watching the action sequences that they were filmed with passion and, thus, there is no doubt in my mind that this film will stand the test of time. At the screening which I attended, people in the audience were gasping in awe and horror as Godzilla revealed its powers, myself included.

Anno and Higuchi have created a work that comes admirably close to rivaling Honda’s original masterpiece. I suggest that you do your best to catch Shin Godzilla in theaters this week during its limited engagement in the US (October 11-18).