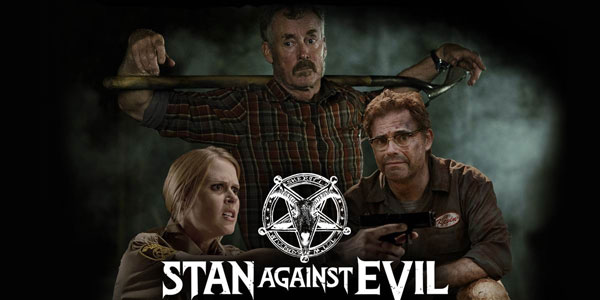 IFC’s new comedy-horror made its debut at New York Comic Con, and made a hell of an impression.

We’re living in a sort of golden age of horror television, and one of the latest highlights to the horror-comedy genre absolutely worth your attention is IFC’s Stan Against Evil.  The series, created by long-time Simpsons writer Dana Gould, brings John C. McGinley back to the small screen as the cantankerous Stan, a small-town sheriff whose recently deceased wife– it just so happens– had secretly been a Buffy-esque monster hunter all her life.

The premise is definitely a rich one, and, based on the first two episodes which I’ve seen, totally delivers in a very American Werewolf In London sort of style.  We had a chance to catch up with Dana Gould, John McGinley, and co-star Janet Varney at NYCC, and everything they had to say guaranteed the other six episodes of Stan Against Evil‘s first season have found a definite place on my must-see list this Fall.

A serial filled with lots of genuinely creepy practical effects might not seem like the most logical leap for one of the most storied writers in the history of The Simpsons, but Dana Gould was more than happy to explain how Stan is the perfect next step in his comedy career.  “I’m a comedian and a comedy writer, but I’m a giant horror movie freak, all my life,” he explained. “I wanted to create something in the horror genre, but that was funny.  I experimented with a couple different ideas… then I came up with this final idea of– basically– take my dad… and what if my mom fought monsters all of her life and never told anyone?  And when she died, he had to take over for her?”

Right now, there’s a number of TV shows that fall into the horror, or horror-comedy genre… such is to be expected, when one of cable’s top-rated shows is The Walking Dead. But Stan brings something unique to the table. As Dana explained it, “It’s a sitcom hiding in a horror movie.”

“There are ways to do horror-comedy… there’s the Abbott and Costello Meet Frankenstein way, there’s the Evil Dead 2/ Dead Alive way, and then there’s the American Werewolf In London/ Stan Against Evil way, which is– the horror movie is a horror movie. It’s straight as a heart attack. And the people in it are funny because they don’t behave in a stylized horror movie way– they behave like people.”

“They don’t scream and run, they go ‘What the fuck is that?’ And that’s what Stan Against Evil is,” he continued. “Stan’s my dad, and he talks the way my dad does, and he’s about as impressed by everything as my dad is– which is to say, not at all.”

John C. McGinley, who stars as Stan, echoed the same sentiment. “The uber-objective I gave Stan to move him through these eight episodes was the most passive thing I’ve ever given a character– Stan wants to get back to [his] recliner,” he explained.  “He’s exhausted, he’s lost his wife, he’s tired, he’s been fired. He wants to get back to that chair, put on that TV, watch the History Channel and have a beer. Now he’s gotta fight witches?… He didn’t want to go be the hero, he didn’t want to go save his daughter…” 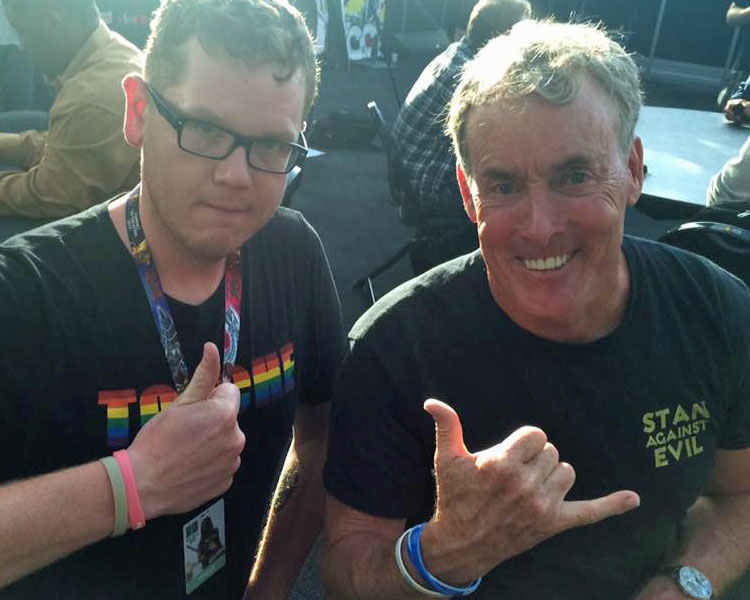 As the showrunner, Gould had to straddle the line between horror and comedy in the show, but McGinley kept his focus on Stan as a person. And what he brought to the role was something which expanded on the character as written in the script. “Unbeknownst to Dana, what he wrote was a guy who was more injured than Dana meant. In the first three minutes of the show, we find out this guy has lost his wife of 30 years and he’s been fired from the job he’s done for 27 years. He’s injured, and he’s hurt,” McGinley said.  “Stan doesn’t have a shrink, he doesn’t have a priest, he doesn’t have a rabbi… he doesn’t have anybody he can go and lay his burden down to. He doesn’t know how to process loss.”

“We have to love Stan because of [his wife] Claire,” McGinley continued. “I wanted to explore Claire. All the answers were in his relationship to Claire, and his devotion to her, and that loss… Like in Scrubs— when you’re trying to straddle comedy in a hospital and not invalidate people’s pain or their loss– that is to Scrubs as comedy is to horror in Stan. I wanted the show to be funny as hell… and scary as shit.”

Of course, Stan Against Evil is an ensemble, so Stan is not alone in his (hesitant) battle against the forces of darkness. Joining him is Janet Varney’s Evie Barret, the town’s new sheriff who replaced Stan when he got fired. Varney was more than up for the challenge of standing shoulder-to-shoulder with McGinley, and being an action hero in her own right.  “To be given the opportunity to jump around in the woods and kill demons and take care of my daughter– and manage misogyny at the same time I’m managing a curse– was fantastic,” she said.

The pilot episode reveals the existence of 172 witches, and Gould has a plan to meet all 172 of them, one per episode. “If they want us to come up with some more [episodes] we’ll say ‘We found some other ones!'” he joked.  “Matt Groening said the greatest thing about The Simpsons, and I’ll apply it to this show. He said ‘We’ll keep doing the show til we run out of ideas, then we’ll do three more seasons’.”

Stan Against Evils debuts on IFC November 2nd at 10pm.  Hear our full round table interviews with Dana Gould, John C. McGinley and Janet Varney below: