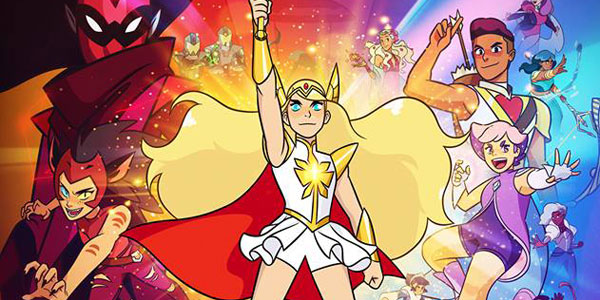 The all new She-Ra animated series is coming to Netflix in November, and it’s going to RULE.

I’ll readily admit, I was never really a She-Ra kid. Not because it starred a bunch of girls, it was just bad timing… by 1985 I had already grown bored with Eternia overall, and had happily moved on to the sewers of New York City to hang out with the Teenage Mutant Ninja Turtles.

So when the new She-Ra animated series was announced, I didn’t pay it much mind. Sure, there were lots of people upset the character designs were unique and different from the 80s show… but I personally liked the new look from the first time I saw the key art. So I decided to give the She-Ra panel at New York Comic Con a go, and see what showrunner Noelle Stevenson (Lumberjanes) and her team had come up with.

From the footage shown at NYCC– a collection of scenes throughout Season One– the biggest focus of the new series will be on the characters and their relationships to one another. Unlike the stand-alone nature of the original show, the new She-Ra will be heavy on continuity, and the world the series is based in seems to lend itself perfectly to an ongoing story arc, building mythology and deepening the dynamics between our characters… good and bad.

Here’s what I find really interesting– As the series begins, Adora is voluntarily training for a role in the Horde Army. Her bestie is Catra… and even after Adora inevitably defects to join the Rebellion (discovering the Sword of Protection along the way), the friendship between the two foes still exists. Likewise, Glimmer doesn’t necessarily feel comfortable with an ex-Horde soldier joining the Rebellion, making her early interactions with our heroine a bit prickly.

Season One will see Adora, Glimmer, and Bow attempt to reunite the Princesses of Power, with the Horde hot on their heels, including Catra, who feels betrayed by Adora’s defection.

Complicated relationships between factions, ideological differences between people with very close personal connections, and examinations of the importance of friendship and supporting one another will all play a major role in this series, and I am FOR IT.

Plus, there’s a lot of genuine comedy going on, too. The new Seahawk, voiced by Jordan Fisher, slayed a scene he featured in, and the more abstract adaptation of the other Princesses of Power are really cool, from the spazzy energy of Entrapta to Frosta, who is now the youngest of the princesses.

Even if you weren’t feeling the new character designs when you first saw them, it’s worth seeing them in action before making a final judgment. I think the designs work very well for the animated style, and I’ve gotta admit, even a fairweather She-Ra fan like me got a genuine rush watching Adora make her iconic proclamation “For the honor of Grayskull” before transforming into She-Ra on the big screen for the first time.

But don’t take my word for it on the animation… check out the trailer for She-Ra and the Princesses of Power below, before we continue:

The She-Ra panel also ran down some really cool merchandise coming out along with the show’s debut on Netflix on November 16th.  Super7 is taking preorders for their 6″ She-Ra and Catra action figures, which are slated for release in January. Amazon has a whole line of She-Ra t-shirts available now.  And there’s even She-Ra stickers available now for iOS and Android.

Check out some photos of Super7’s She-Ra and Catra action figures below, and get ready for She-Ra and the Princesses of Power on Netflix November 16th. I cannot wait to see more! 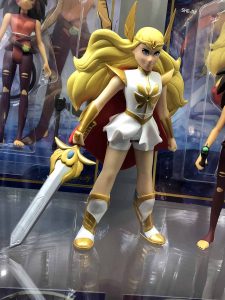 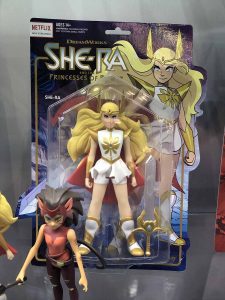 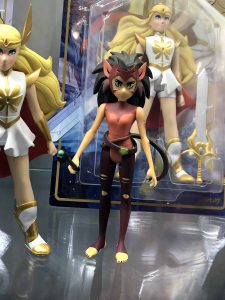 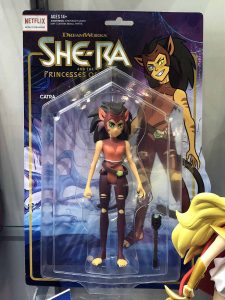 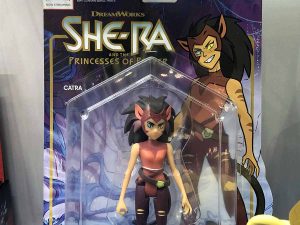 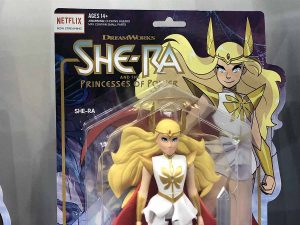 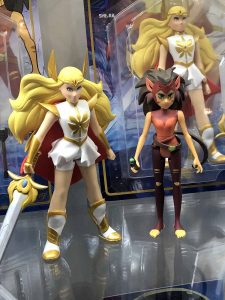 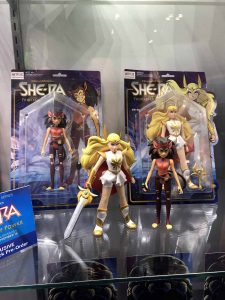 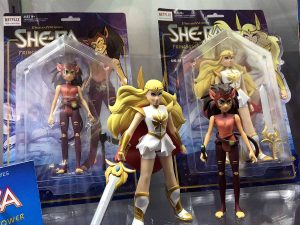