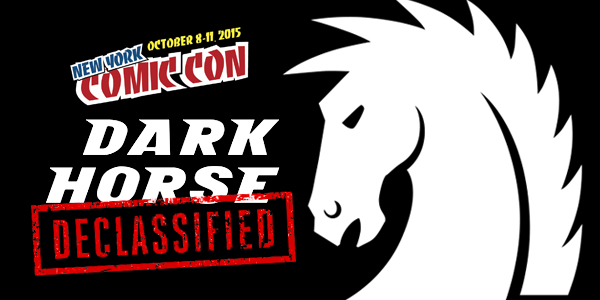 NYCC 15: Dark Horse has big plans for 2015, and they include some new licensed material.

Dark Horse Classified happened on Friday at NYCC 2015, and with it came a look at all the new titles coming to the Dark Horse imprint. Continuing their long success of dealing in licensed materials, Dark Horse plans on releasing new licensed titles including: Aliens Defiance, a Legends of Korra ongoing story, more Lara Croft in Tomb Raider, as well as a new Buffy the Vampire Slayer title that takes a look back at the early years of the slayer, back when we fell in love with her in high school, . Also coming out soon on Dark Horse is a How to Train Your Dragons series, that will fill in the gaps between the first and second movies, and explore the world of dragons more. Most will think the biggest announcement for Dark Horse is the continuation of the Avatar story through the comic book medium, but I never understood the interest in that story, so I’ll probably be avoiding this title.

As an indie comics fan, I was looking for the next great Dark Horse creator driven title like Brian Wood’s Rebels and Matt Kindt’s Mind MGMT. For fans like me, we got a look at the Dept. H cover art that was teased at San Diego Comic Con, with a short description of what’s to come. The moderator teased that this new story is like 24 meets Tinker Tailor Soldier Spy under water. What really struck me as interesting is the way Kindt is approaching his story. Every issue is one day in the life of the POV character. So as she continues on her mission to save people from an underwater lab, each issue will have the water rising up a bit more, all leading up to the end moment where she’ll either make it out alive, or not. The story sounds unique and exciting, and I can’t wait to give it a read.

Dark Horse has proven their respect for licensed stories, and with the next year’s new additions, many of the tv shows and movies fans love can continue on in the books. Unless you’re a Star Wars fan, but that’s a different story entirely. That aside, they’ve clearly had some sucess with the ongoing Fight Club 2 series, so why not parlay that momentum into other stories? Maybe we could get a graphic continuation to the Django story, or even better, Dude Where’s My Car Too?  Personally, I hope they continue to see success from the great created driven content they have, like Donny Cates and Eliot Rahal’s The Paybacks, and maybe not play with every license that steps into the sandbox. Either way, I’ll be reading.