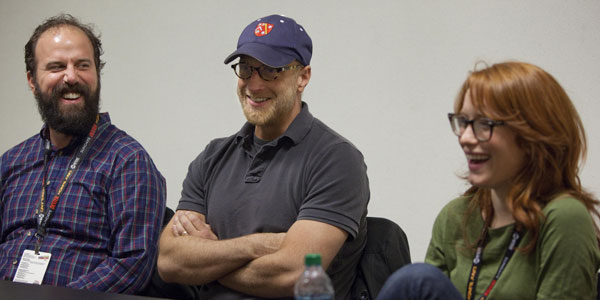 When I first heard about Eagleheart, the Adult Swim action spoof starring Chris Elliott, I geeked out– here’s the weirdest, funniest network on television, combined with one of the funniest, weirdest actors of all time! If you haven’t seen it, the resulting show is every bit as awesome as it should be, as Elliott’s US Marshal Chris Monsanto punches, kicks and shoots his way to solving cases week after week! We had the chance to sit down with Chris, co-stars Brett Gelman and Maria Thayer, and show creators Michael Koman and Jason Woliner at New York Comic Con to discuss what’s coming up on Season Two.. check it out!

Chris Elliott loves the 12-minute format on Adult Swim, which has been used to great effect on Eagleheart’s epic first season. Elliott says the show makes him feel he’s come full-circle, since his early work on David Letterman was also quite short. It’s also easy since the rest of the cast and writers are all amazingly funny people, and Michael Koman was so excited to get Elliott on board as his star he’s been tailoring the scripts to fit his lead perfectly. And in the event a story runs short time-wise, they can always add in more of Eagleheart’s trademark brand of over-the-top violence and carnage. Fans of exploding punches may be a bit disappointed– don’t expect to see the gags from the first season recycled in the new episodes– the writers have all new weird and hyper-violent ideas they want to try out instead. And it’s not just Chris and Brett that get involved in the mayhem next year… Maria gleefully hinted her character Maria would quickly catch up to the respectable body-counts of her male counterparts, and she may in fact be the most violent of the trio when she cuts loose!

Koman proudly declared, on behalf of his writers, they have never done any research on police work or procedurals for any Eagleheart stories, and they don’t intend to start now, either. The show will be defiantly free of any continuity in 2012’s Season Two, although we will see a lot more dynamics between Chris and his team– Season One was really trying to establish who Monsanto was– often in the most violent ways possible– but the ensemble will really become the focus now, with Maria and Brett each getting their own stories as well as Chris causing as much mayhem as possible… even in new environments! In fact, outer space was specifically mentioned as the location of one of the team’s cases in the new Season, which is a great way to up the ante from their earlier travels to places like the center of the Earth. The budget is really the only limit for team Eagleheart… they just write what they think is funny. And while there’s no confirmation it will happen, they think a crossover with Paul Scheer’s NTSF:SD:SUV would be very funny… as long as Trent gets beat by Chris by the end! Crossovers in the Eagleheart universe aren’t unheard of– in fact, the show’s first appearance was as a fake trailer in Children’s Hospital, which many fans thought was just an in-joke before realizing Eagleheart was very, very real. Whether the show crossover happens, we’ll almost definitely be seeing at least one celebrity guest star in the new season… show producer Conan O’Brien will be making an appearance in at least one episode!

Everything said about the new season of Eagleheart sounds very promising, and I’m super-glad the team is still trying to make things more over-the-top, more violent, and more crazy than Season One… The idea is to make a whole series of 12-minute mini-movies, packed with as much comedy, action, mayhem and weirdness as possible… Season One set a high bar, but it looks like they’re more than up for the challenge to raise that bar next year… although the increased awesomeness does come at a price. Brett and Chris both commented on Brett’s haggard appearance at Comic Con as a consequence of the intensity of the show– “Eagleheart ages you,” he quipped. I’m sure it does, but I’ll keep watching even if it kills you!