NYCC: Mike Judge Talks (and Shows) the Return of Beavis and Butt-head 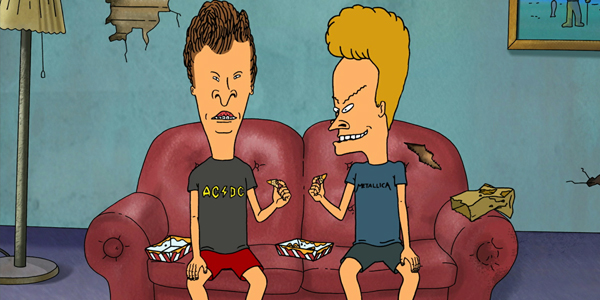 After all these years, the most iconic cartoon idiots of all time are returning to TV– Beavis and Butt-head returns to MTV on October 27th! To celebrate the grand return, creator Mike Judge made an appearance at New York Comic Con, where he answered questions and even aired the premiere episode to a packed room of diehard fans!

First off, let me say if you’re afraid that the return of Beavis and Butt-head is just some kind of money-grab, don’t worry– this return is the real deal, and Judge is very excited to return to one of his earliest and best projects. The new episode screened during the panel– which focused on Butt-head obsessing over seeing Beavis cry and telling everyone they know about it– features the same crude animation and dumb-but-pointed (huh huh, butt-pointed) comedy that made the show a classic. As Judge said, he decided the boys will still be teenagers after all these years, since he loves the idea of comedy being timeless. He compared Beavis and Butt-head to the Three Stooges, who also never seemed to age throughout the years. One thing does change, however and it’s a cool idea that keeps up with the times– instead of just watching music videos (which we all know MTV rarely plays), our moronic heroes will now also pepper in comments to reality shows and YouTube videos, in addition to skewering today’s top artists in the way only Beavis and Butt-head can. Judge also credited MTV, as being really good at being made fun of, and even making fun of themselves… this has made his job much easier by having full support of the network with the new episodes. Likewise, even some big-time music stars have been more excited than terrified at being a potential target for the duo… Judge recollected reading on Twitter that Justin Bieber posted that he can’t wait to get made fun of on the new show, which Judge hinted will probably happen sooner than later. When asked if Beavis and Butt-head will also set their sights on popular cartoons like Family Guy, Judge said probably not. “I think South Park already started a war with them,” he quipped.

Judge, now a 26-year veteran of animation, went into his early life as an engineer, working in multiple offices throughout the midwest. It was during these years he got many of the ideas he would later include in the cult classic film Office Space. MTV picked up several of his animated shorts, including “Frog Baseball,” the first appearance of Beavis and Butt-head, and before long the short was truned into a series and the rest became history.

One of the downsides of the classic Beavis and Butt-head finally seeing release on DVD a few years ago was the lack of music videos. Licensing rights for the videos the dudes ripped on were a logistical nightmare to secure, so they were forced to leave those off the home video releases. With the new show, Judge has though ahead, and everything the boys rip on, be it music videos, reality TV or YouTube, will be included on the DVDs. Also in the great news department, the return of Beavis and Butt-head will also see a return of the great secondary characters, such as their teachers Mr. VanDrissen and Coach Buzzcut… and Judge also hinted we’d be seeing a cameo from sarcastic classmate Daria, who got her own spinoff in the early 2000’s.