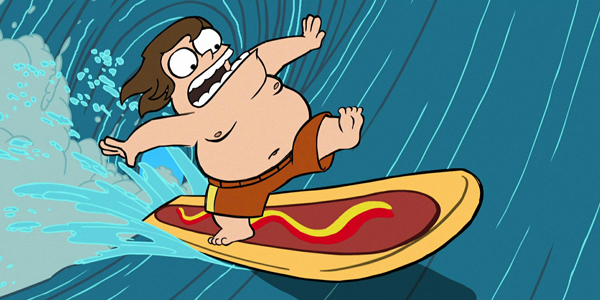 MTV’s new animation isn’t all about the return of Beavis and Butt-head… premiering this Thursday night is their other brand-new animated comedy Good Vibes. Good Vibes is the surf-soaked story of two beach buds, transplanted Jersy native Mondo and his new best friend Woodie, and it’s a hilarious coming of age storythat harkens back to the smart writing and raunchy comedy of early Simpsons. I had the chance to see the premiere episode at New York Comic Con, and also chat with the cast and creator David Gordon Green about the new animated series… check it out!

First, let’s talk a little about the premiere episode of “Good Vibes.” The show tells the story of a 15-year old kid named Mondo who moves from the Jersey Shore to a surf town in California. Our heavyset hero is taken under the wing of Woodie, a local surf-stoner who shows Mondo the ropes of beach life, high school and, of course, girls– or in Mondo’s case, girl in particular– Jeena, the cute purple-haired “girl next door” with a bit of a mean streak. I don’t want to spoil the plot for you (seriously, you should watch the premiere), but what rolls out from there is a hilarious half hour as the boys try to “catch waves and get laid,” in what’s really the first animated “bro-mance” on television. It’s a smartly written show, with some great characters and according to creator David Gordon Green (of Pineapple Express and Eastbound and Down fame), this show will very much have a continuity from episode to episode, which is a welcome change in the usually-static world of cartoons. As you’d expect from Green’s track record, though, the witty dialogue and well-rounded characters are supplemented by plenty of raunch– there’s a great bit involving Mondo’s mom Babs’ constant sexual allusions in her actually mild-mannered past jobs, and being set on the beach there are obviously legions of boobs to be ogled by our heroes.

Green came up with the idea behind Good Vibes years ago, having wanted to try his hand at animation. The first pilot, including much of the same cast, was made for Fox several years ago but the network passed… fortunately MTV breathed new life into the concept, and the result is the first 12-episode season which starts this week. For his part, Green loves working in animation, and plans to marry his two careers together in the near future, possibly with an animated adaptation of the Dark Horse comic series Freaks of the Heartland. It’s right up Green’s alley… not that he cares. “I want to make movies nobody wants me to make,” the director quipped.

But Good Vibes is more than just a well-written comedy, it also sports a fantastic voice cast including Josh Gad (star of Broadway’s “The Book of Mormon”) as Mondo, Adam Brody (The O.C.) as Woodie, Olivia Thirlby (Bored to Death) as Jeena, Debi Mazar (Entourage) as Babs, along with Green vet Danny McBride and character actors Tony Hale and Alan Tudyk as more instantly-classic supporting characters.

What’s interesting about this cast is Good Vibes is the first time most of them have done voice acting for an animated show. Thirlby said that voice acting in the recording booth is very different from live action– in fact she felt she needed to drop her inhibitions completely, which she never felt on a live action set. It was a bit weird to get directions to say really inappropriate things and make very odd noises (her most awkward moments were recording “sexy noises.”) Gad and Brody found it an equally interesting experience. Josh (who became attached to the show prior to his huge explosion in Matt Parker and Trey Stone’s musical) loves that chance to make something out of nothing but his voice, while Adam enjoys the free and time-efficient structure and put it quite succinctly saying “it’s great to be a cartoon!”

There’s a great chemistry between the leads, and it translates to real life, as Josh and Adam recalled the ad-libs that made it into the final show (including Mondo’s great line “You smell like Old Spice and balls”), and attributed their rapport to going through table reads and recording the first few episodes together. Their relationship has been built over 3 years since the Fox pilot, and it lends a lot of depth to their characters’ “bro-mance.” At the core of the show is these two guys going through what Gad calls the trials and tribulations of growing up, to which he added he’s very excited that the show rewards the audience for watching. He hinted that the relationship between Mondo and Jeena will be a particular focus in Season One, and the relationship will definitely keep moving forward and building.

Mobility is another factor much of the cast enjoyed– during the recording of the first Season, Thirlby recorded while on site in South Africa shooting Judge Dredd, Gad recorded between sold-out shows in New York, and Debi Mazar, who plays Mondo’s working mom Babs, could record anywhere from Italy to NYC, or wherever she found herself. Mazar said she’s had her share of jobs as ridiculous as the ones Babs recalls on the show– she’s done everything from makeup, to cutting hair (including giving Andy Warhol’s wig a trim one time!)… as she says “[you] do what you gotta do to survive.” She feels the need to do what need to be done to get by is something she and Babs share, although she’s a bit wary of how far the crudeness of the show will go sometimes. “Some of the things they write make me blush,” she laughed, adding that she gets it– the show is about a 15-year old boy discovering his sexuality and his place in the world, and in that context the raunchy dialogue makes perfect sense.

Many of the actors have very distinct voices– Mazar has been recognized sight-unseen, on the phone multiple times– and there’s a good balance between actors using their natural voices for their roles while others invented all new speaking patterns for their characters. Mazar’s trademark “New Yawk” accent was a big deal to keep, so much so that Babs was re-written when Debi and her accent came on board (originally she and Mondo were moving from the midwest to California). Adam Brody put a lot of thought into Woodie’s voice, ultimately deciding a voice that’s “equal parts Barney the dinosaur and Spicoli [from Fast Times]” was the best fit for Mondo’s new best friend.

It was great to see a cast this successful and busy with so many other projects excited to see Good Vibes finally come to light. If every episode keeps up this level of sharp writing, outrageous comedy and energetic, well-developed characters, I’ll be sticking around to soak up all the “Good Vibes” I can.
—
Good Vibes premieres on MTV Thursday October 27th at 10:30pm, right after Beavis and Butt-head.