NYCC: On The Floor With Hasbro 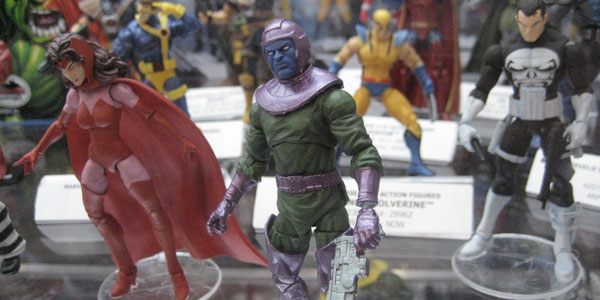 For the first time ever, Hasbro came in full force to New York Comic Con. Hasbro has a huge booth at NYCC, featuring some awesome convention exclusives, along with showcases for brand new products for each of their lines, from Star Wars and GI Joe to Transformers and Jem… and of course Marvel! We got the chance to chat with some of the Marvel design team at Hasbro, and got some inside details on Marvel Legends, Marvel universe and more!

Hasbro stole the show at San Diego this Summer with their long-awaited return of Marvel Legends, along with some awesome toys for The Avengers movie and a new year for Marvel Universe with a much greater attention to detail and improved articulation. New York’s showing was every bit as impressive, with packaged samples of Legends series one, and finished sculpts of wave two on display, along with some awesome new Marvel Universe figures long in demand– including Professor X in his hover chair and Jubilee! The Jubilee on display featured her recent black costume under her ever=present yellow jacket, but Hasbro confirmed there will be a “classic look” variant available with the pink tank top and blue shorts fans remember from the cartoon and 90’s X-Men comics. I tip my hat to the team for not only finally getting fans a great Professor X in his gold hover-chair, but releasing it as a single-carded figure! The plan is to have the chair split into several parts for packing purposes, which could then be assembled for the loose figure. We all know Ed McGuiness is providing the card art for the last 2011 waves of Marvel U, but while Ed is moving on to Legends card art, Mike Deodato will be returning to Marvel U for the first waves of 2012!The team is well aware of delay issues with some Marvel U products such as the comic two-packs, but all the new packs from Warlock/ Thanos to Mr. Sinister/ Gambit are all still scheduled for release before the end of the year. 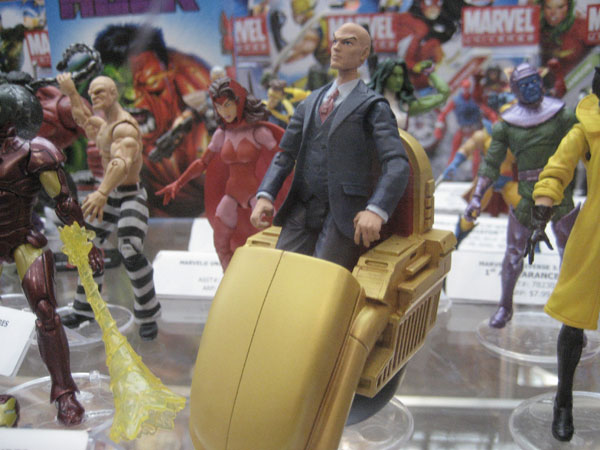 But don’t worry about a delay for Marvel Legends– the launch wave is still on schedule for January 2012 (which, in case you didn’t know really most likely means late November to early December). The final production samples of Wave One looked phenomenal, with a dynamic and eye-catching new package that’s a vast improvement over the previous Legends packages, more compact and lots more eye catching. Like I told the Hasbro guys at the booth, they’re making me break my cardinal rule when it comes to toy collecting. I have always kept to a single scale for each property I collect, but the Marvel U. and Legends both look so good there’s no way I’m not collecting both lines. However Hasbro isn’t being too brutal on us double-dipping collectors… Legends’ first year will only feature three waves, along with a 6″ Avengers movie line which will most likely end up a Wal-Mart exclusive, and gives us the full team in Legends scale, along with an absolutely amazing Loki to fight. It looks like the movie set will not feature a Build-A-Figure, but the BAF concept will continue for all three standard Legends waves in 2012. 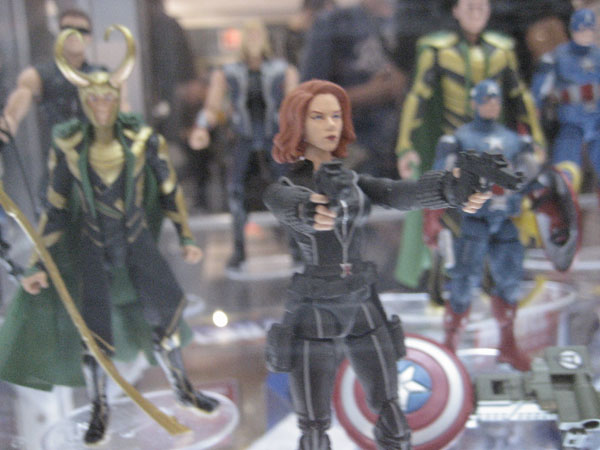 The Marvel team at Hasbro definitely knows their stuff, and they’ve really stepped up their game in 2012, to deliver fantastic looking products, including lots of characters fans have been wanting for years– between the return of Marvel Legends, the awesome new Marvel Universe figures, and movies for both The Avengers and Spider-Man, next year is shaping up to be the best one yet for Hasbro and Marvel!

We’ll have our full coverage of the Hasbro/ Marvel panel up soon, but I hope you enjoyed these bits of info from the floor, and these photos in the meantime!