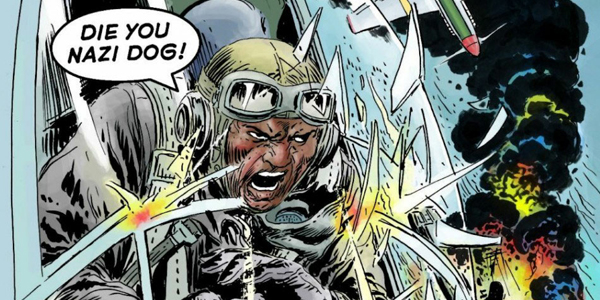 This year marks the 70th anniversary of the Tuskegee Airmen, the first African American Air Force squad, who flew over 1,500 missions across Europe during World War II. The story of the Red Tails, named for the distinct coloring of their legendary P-51 Mustangs, has been a personal project of Star Wars creator George Lucas for two decades, and this story will finally make its way to the big screen next January. Lucasfilm hosted a panel at New York Comic Con all about the epic action film, featuring the film’s co-writer Aaron McGruder (The Boondocks), actors Michael B. Jordan and Leslie Odom, Jr. and real-life Tuskegee Airman Dr. Roscoe Brown! The panel discussed the movie– and the real life history behind this American hero story, and unveiled some brand new footage and a great new poster for the film… Check it out now!

It seems strange that a story as major as the Tuskegee Airmen never made it to the silver screen, but it didn’t surprise Dr. Brown… he recalled that after the war many of the men who served didn’t want to talk about the war– especially with race still being such a huge issue in the country– many of the veterans focused on developing their careers and starting their families as best they could. But now, after 70 years, we can all see their experience on the big screen. Dr. Brown was thrilled as the new trailer for Red Tails was screened to the packed room, and when it ended commented “Every time I see this trailer, it takes me back 50 or 60 years, and I’m young again.”

Aaron McGruder, best known as the creator of comic strip The Boondocks, is the co-writer of this new film, but despite his penchant for social commentary he wants Red Tails to be more about a classic feeling of action and adventure, as opposed to race– this movie is about classic American heroes, fun and action-packed storytelling, and thrilling effects and stunts. McGruder wants black kids and white kids to see this film together, and to leave the theater wanting to be fighter pilots, much like he was inspired as a kid watching classics like Star Wars and Seven Samurai. The panel screened more footage of one of the dogfights between the Red Tails and the German fleet, and it is clear that this film is a huge-scale war movie, very different from the previous HBO film, which focused on the Tuskegee Academy as opposed to the battlefield.

Michael Jordan and Leslie Odom both recalled the training they received in advance of this movie, which included location shooting in Prague, complete with boot camp and shared bunks, no cell phones and no running water… just like real soldiers. Dr. Brown, who spent weeks in Prague himself as a consultant during filming, laughed that the actors were all “soft” when they first arrived, and needed to toughen up to find the confidence and daring of the actual airmen. Flight simulators were used in training, which were modeled after the delicate and precise controls of the P-51 Mustangs, known as “the sports cars of the sky.”

The attention to accurate history is as evident in Red Tails as is the amazing effects work, courtesy of Industrial Light and Magic, who have worked on everything from Star Wars and Indiana Jones to the new Star Trek. The aerial combat on display in Red Tails is very complex and seemingly chaotic, with lots and lots of planes engaged in combat maneuvers. Dr. Brown was quick to mention that while the dogfights may appear to be chaos, in actuality they were based on very intricate flight patterns and aerial strategies, all of which were painstakingly recreated for the new film.

The presentation ended with the debut of a great new Red Tails poster, a vintage style pulp comics image by comic book legend Joe Kubert, which was given to the entire audience. It was a great way to end the panel, and I couldn’t be more excited to see the Red Tails fly soon!