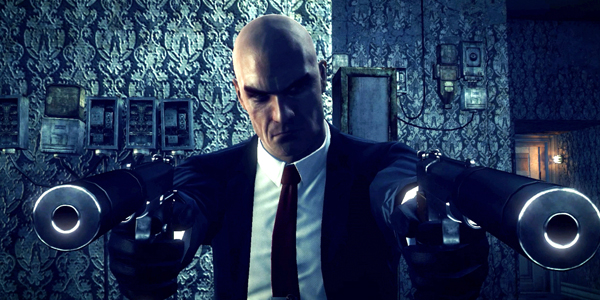 While the bustling showfloor of New York Comic Con is currently home to a playable build of Hitman: Absolution, Square Enix treated us to an offsite showing where we were able to play through a sizable portion of the game at our own pace — and it rocked our socks.

When we last saw Hitman: Absolution, it was clear that Copenhagen-based developer IO Interactive was onto something special but, experiencing the game first-hand, it truly exceeded all expectations.  Stepping into the shoes of Agent 47 feels surprisingly fresh as many of the mechanics from previous games in the series have been painstakingly refined to not only deliver a more streamlined experience, but also a more accessible one.  Your HUD has a clean look and contains all the information you need without being intrusive, with your health and radar in the lower left corner, and your “instinct” level and selected weapon (and its concealment status) located the lower right.  A quick tap up on the d-pad will pull up your inventory and intuitively allow you to swap weapons on the fly.  Similarly, tapping down will conceal any weapon you have armed.

Venturing into the introductory level, and tasked with entering a secure compound while tracking our target, we were able to get acquainted with both the familiar and new aspects of the Hitman franchise.  First and foremost, holding the right bumper enters Agent 47’s new instinct mode.  This helpful addition can be used to highlight enemies, anticipate their projected movement path, and locate items of interest.  Taking cover behind a large rock, we were alerted to the presence of an enemy guard in the area and, using instinct, discovered and procured a wrench lying nearby.  By throwing the wrench away from 47’s intended path and causing a conspicuous noise, we were able to slip by the distracted guard as he went to investigate its source.  The cover system here is spot-on.  A quick button tap will put 47’s back to the wall and keep it there, even when rounding corners, until you want to exit.  While hiding behind walls and objects, you can remain hidden from sight while still being able to grab nearby items and use weapons when necessary.  If an enemy wanders too close, you can even pop out to grab and strangle them before they are even aware of your presence.  So many titles try to incorporate cover mechanics, but they rarely work as well as what we’ve seen here. 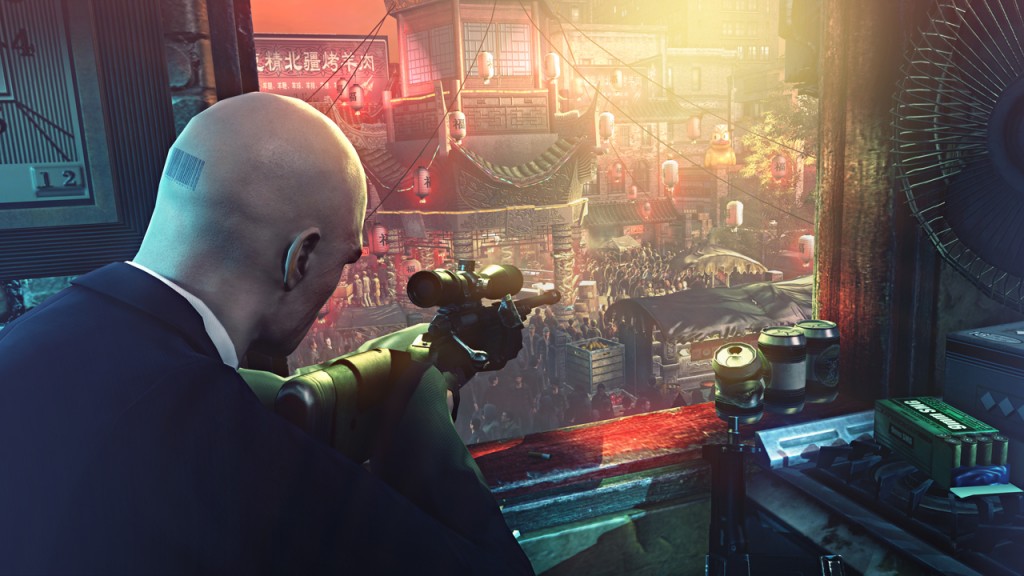 Next, we were prompted to take out another guard with a silenced pistol.  By applying pressure to the trigger, you are able to steady your aim (or actually slow time slightly if looking down a sniper scope) before following through with your deadly shot.  Shortly after, we got to pull out Agent 47’s signature fiberwire for a quiet kill on an unsuspecting foe.  Killing an enemy with the fiberwire will instantly allow you to begin dragging the corpse as you already have a grip on them (enemies killed in other fashions will need to be grabbed manually in order to hide the evidence).  In classic Hitman style, there are plenty of body-disposal options scattered around stages in the form of trunks, storage containers, closets, laundry chutes, and the like.  Enemies unlucky enough to be caught near a window or ledge can even be thrown to their death with no need to hide the body from their peers. 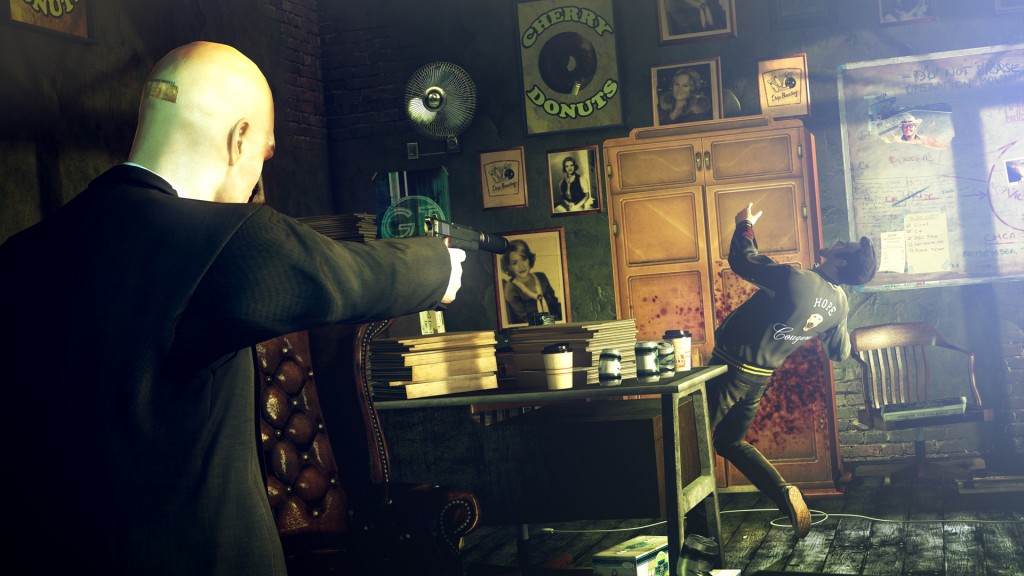 But any longstanding fan will tell you the name of the game is stealth, and indeed you can’t beat the sense of accomplishment you will feel (backed by a brag-worthy high score) for completing a level with zero casualties outside of your intended target.  All your actions in each stage are ranked by performance and scored accordingly (with sweet bonuses available to agents that score high enough).  Non-lethally and silently subduing someone and hiding their body will grant you points.  Of course subduing a victim can be noisy and riskier than going for a quick kill, so players taking the most professional approach will need to exercise patience and cunning to obtain the best scores.  Conversely, killing an enemy carelessly and leaving their body out in the open to be discovered will net you serious negative points.  If you were to hide that body, however, you will at least be granted points equal to that negative rating – effectively breaking even.  After all, by hiding the body before it is discovered, players are still trying to remain stealthy.  There are many areas in Hitman: Absolution that, while not exactly forgiving, don’t overtly punish you for making a mistake.  For example, by subduing an enemy, Agent 47 can still take their clothes and use them as a disguise.  At the expense of his instinct meter, he can even mimic his foe’s mannerisms to blend in with them while in close proximity.  But if your cover is blown, it’s not the end of the game like it was in previous iterations where literally everyone in the level was suddenly alerted to your presence and location.  If you can quickly and silently take out the hostiles that spotted you, your disguise will return to an “undiscovered status” — after all, the only people that found you out won’t be around to tell anyone.  This intuitive design is present throughout and really adds a sense of realism to the world — not only that, but it gives players a fighting chance to complete the level even after their cover’s been blown. 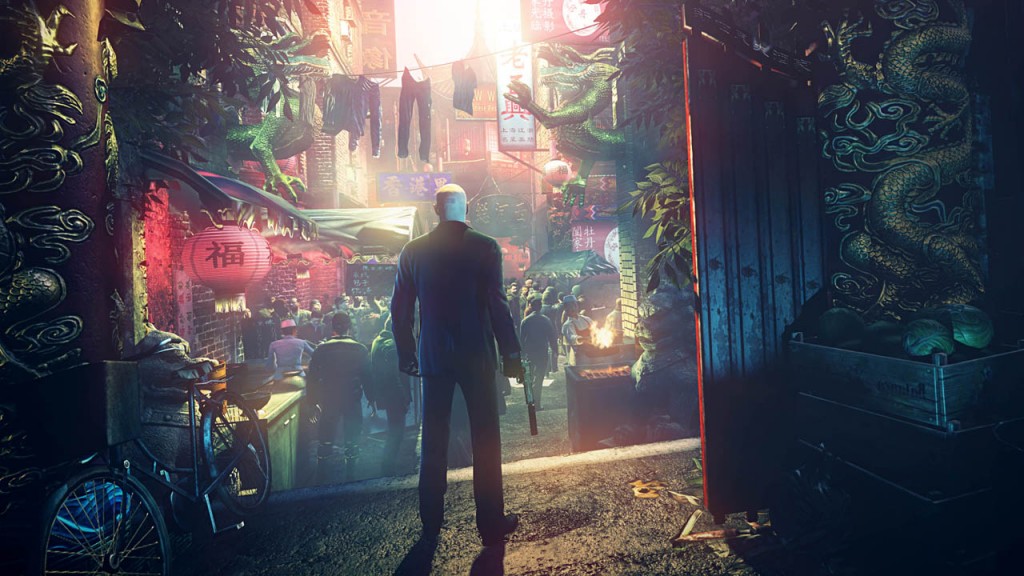 Namely though, it gives players options.  The single best thing about Hitman: Absolution is the overwhelming amount of options presented to you and the freedom that goes along with them.  For instance, during the game’s first real “hit,” in an early level titled The King of Chinatown, you are tasked with eliminating your target in the middle of a crowded town square.  At first, this seems like a daunting task given the sheer number of NPC’s on the screen that can witness anything you do (more on this in a bit), but the more you explore the level and tail your intended victim, the more you realize that there are a huge number of inventive ways to go about pulling off your mission.  By hiding among the crowd, you can eavesdrop on your target, and in fact many characters in the game, to gain useful information.  In this case, you find out he’s meeting with his dealer shortly.  You may wish to wait for the meeting to occur and follow the dealer back to a secluded alley where you can take him out and steal his clothes as a disguise.  This allows you to approach your target and get him to follow you to an area outside of public view.  Maybe you want to tail the dealer for a bit longer to see where he ends up?  If so, you’ll find that he goes back to his apartment, which just so happens to have a great vantage point of the city and could be great spot to set up a sniper rifle.  Close inspection of the city will also reveal clues pointing out things like heavy cargo loads hanging from cranes that can be dropped with a well-placed bullet.  Given that you can stay out-of-sight and time your shot well from a silenced weapon, you can make your hit look like a tragic accident…  And if you want to cause as much chaos as humanly possible, Hitman: Absolution has you covered there too.  Get your hands on a powerful weapon and you can gun down your target with reckless abandon.  It’s sloppy, it’s crude, it won’t grant you with the highest score, but it’s insane amounts of fun and it’s up to you to decide what kind of approach suits you best. 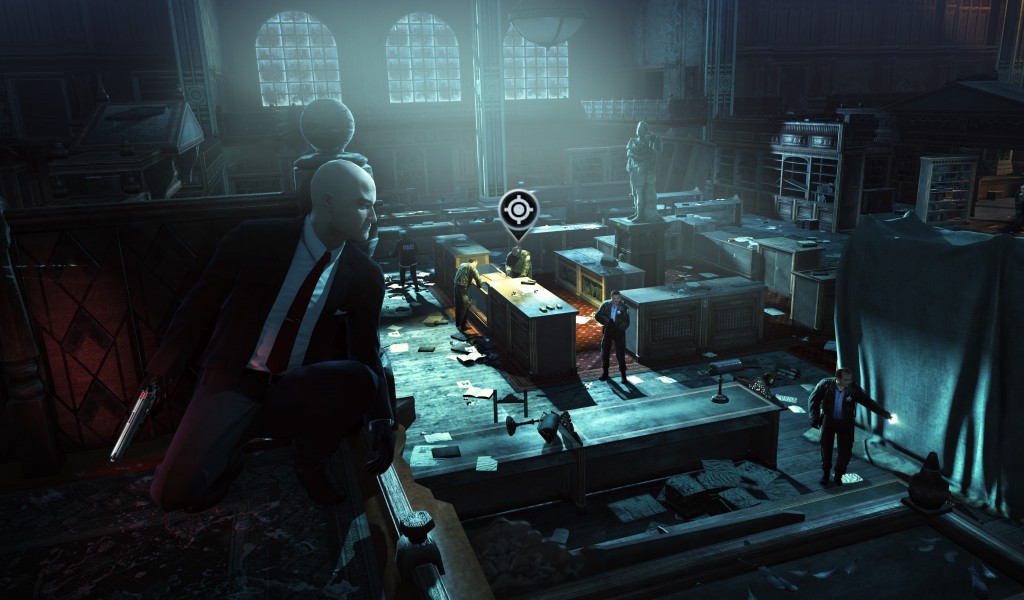 Until this point, we’ve really only dealt with how your instinct meter can be used to help you slip past foes, but it can also be spent in “point shooting.”  This mode can be triggered while entering instinct mode and effectively freezes time, allowing Agent 47 to line up fatal shots on every baddie he can see.  On that note, the shotgun in this game is one of the most satisfying weapons in recent memory (especially in point shooting mode) and handles exactly like you want a shotgun to.  One pull of the trigger is followed by a hearty “BOOM” and a messy death for any hapless soul on the other end of the barrel.  As much as I want to keep my personal playthrough as flawless as possible, it’ll be very tempting to get my hands on one of those.  Luckily, the large amount of challenges presented to you in each level (which grant you bonuses much like in the “Sniper Challenge” pre-order incentive) will require multiple playthroughs and multiple approaches, so completionists will get to play each stage in a few different ways and get the most out of what the title has to offer. 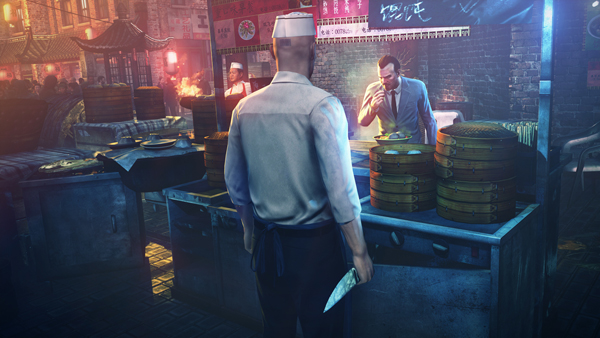 I do want to go back and touch on the crowds of NPC’s present in many levels throughout the game, because I’ve never seen anything quite like it.  The engine that Hitman: Absolution uses allows for a staggering amount of characters to populate the screen at once — and no, they aren’t all carbon copies of one another, they all appear as unique models, wearing different clothing, and acting independently.  Not only that, but the crowds actually serve an important purpose — they can help hide Agent 47 from pursuers.  By walking into a group of people and avoiding eye contact with hostile characters, you can effectively remain undetected.  Using the instinct function even highlights which civilians you are currently blending in with.  Very cool stuff. 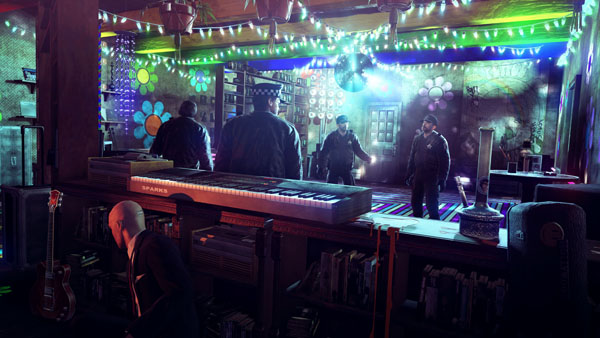 IO Interactive did a phenomenal job balancing Hitman: Absolution’s difficulty levels to cater to players of all skillsets (the five difficulty levels will change the reaction time of enemies, limit the number of checkpoints you can activate, and you quickly you burn through your instinct meter among other things) and, by custom-tailoring each level to accommodate multiple play-styles and ways to reach your goal, have constructed one hell of an experience — even in the early build that we were shown.  I won’t get into the story elements we saw as not to ruin anything, but what I will say is that the cutscenes were intense and more jarring than anything we’ve seen in the series up until now.  Equally intense is the fantastic score that accompanies the game’s more frantic moments.  The fact that so much of the game relies of subtle ambient sound beautifully contrasts the Zimmerman-esque, booming audio that accompanies certain key sequences.  I really wanted to come up with something I didn’t like about the title to balance out this preview, but I couldn’t.  I was thoroughly impressed by virtually every aspect of the game.  Come November 20th, Hitman: Absolution should be at the top of your list during the rush of holiday titles — this is one you won’t want to pass up.