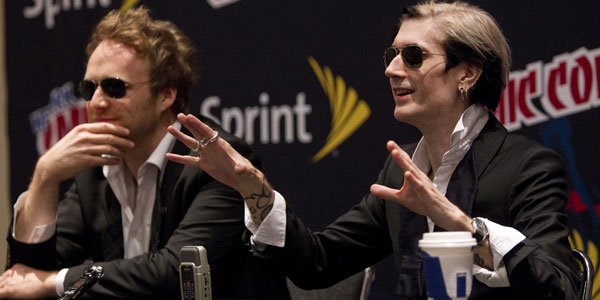 Perennial Comic Con favorites Jackson Publick and Doc Hammer– and their little show called Venture Bros– were back for their hometown Con again this year, and they sat down to talk about everything from writing the upcoming Season Five, to what they’d like to see in an inevitable (someday) reboot of the show, with all the inappropriate language and obscure pop culture references you’d expect from the guys behind the funniest cartoon ever. See what Jackson and Doc had to say at NYCC this year…

The Venture Bros. duo showed up stylishly late to the press conference, decked out in matching black suits, tieless shirts and indoor sunglasses, befitting their “jetsetting playboy” moniker. Of course the questions on everyone’s mind were what’s coming in Season Five, which the duo are kind of busy writing right now, and they expertly dodged every plot-based question with the grace of the Impossibles’ Ned at a daycare. What they did say was their ideas for Season Five have been their craziest yet– Doc was quick to ad “Oh my God, they’re all terrible.” After some tangents– including a movie idea about a Special Forces soldier, played by modern Sean Connery, who fights an army to rescue what turns out to be his child bride (I’d see it, for the record), and the Elephant Man’s ultimate nemesis (a beautiful woman, causing the tortured soul to slit his own wrists, per David Lynch anyway), Msrs. Publick and Hammer were deftly swayed into a verbal ambush and had to reveal some insight on their writing process to avoid certain death at the hands of we grammatical cannibals. Regarding story arcs, Jackson said some of them have been in place all along, but new ones will get added and then retrofitted in to the previous plotlines… it’s easy enough to do since the same two guys write the whole thing, and are heavily involved in design, storyboarding, casting and directing each episode. That being said, it’s not a quick process (as Jackson put it, “I wouldn’t imagine it’d take ten years to get to Season Five.”). On average it will take the dynamic duo about two seasons (e.g. four years) for something to go from an idea hatched at Astrobase Go! to an in-episode plotline. In the new season, the plan is to focus more on the core Venture family… although I’ve sat with Jackson and Doc enough times by now to know they always say this, so there’s that.

Jackson and Doc are perfectly happy with their show staying as a cult hit (as long as it continues to afford them the largess to live the lives of international playboys)… Jackson always assumed they’d be finished with the show by Season Four or so, but the ideas just kept coming, so they wanted to keep it going– the good news for fans who haven’t yet heard, Venture Bros. was renewed for not one but two seasons, meaning double the Venture in the coming years! The Venture guys were more than willing to guarantee that fans will hate Season Five, before changing their minds and deciding it’s awesome– just like Season Four, and Season Three, and pretty much everything else (well maybe not the Holiday Special… does anyone even remember that?? I should have brought that up…). That being said, Season Six will be the one everyone loves from the get-go. They based these predictions on the science of pure conjecture, of course, so it’s probably not going to happen (except that it certainly will).

Discussion shifted to the DC New 52 reboot, and the boys postulated on how Venture Bros. would fare were it rebooted– Doc was concise as ever, saying “If we got cancelled, it would be replaced with a better version of the show.” How so, you may ask? Never one to leave such stones unturned, Publick and Hammer quickly listed off their laundry list of reboot ideas: it would be darker, with no music. OK. It would obviously introduce a Fringe-like alternate dimension. Doc Venture’s mortal nemesis would clearly be a mechanized Doc Venture, from this sinister other universe. And it wouldn’t be funny at all. Sweet, sounds just like the New 52 to me! Get Jim Lee and Geoff Johns on the phone like now!! The Venture guys went on to think up ways they’d change the show if they had no restrictions whatsoever… Jackson would add more pop songs to the mix, without having to pay the royalties. Doc, austere as ever would add way more fist-fucking jokes. The caveat here is, Cartoon Network really doesn’t hold them back creatively, especially these days– the last time either jetsetter could remember having a run-in with standards and practice was in Season One, when Brock peeing on a mummy was shot down, as was the alligator he slaughters being pregnant. They credited Family Guy as the show that really changed the dynamics of what could be done on television– if they can get away with what they do on network, a cable show can clearly push the boundaries even more.

Now of course you’re asking what not to expect on the new season… the duo gave out a few not really cryptic clues: first, there won’t be any straight up musicals. They’re not really “showtunes guys,” and they figure Matt and Trey from South Park kind of have that market cornered, so leave it to them. And as much as they’d love to do an episode– or a comic– based on the classic Rusty Venture, don’t expect it to happen. Lastly, a crossover with their fellow Adult Swim shows is also unlikely, although Jackson loved the idea that Hank watches “Superjail!” but wonders if anyone else can see it or if the psychedelic show is part of his own crazy psyche.

How about plans after they finally say goodbye to the Venture clan? There’s nothing planned right now, but they are still international playboys, so there’s that– and they’d most likely keep doing Conventions, since they love it, especially seeing all the Venture-related cosplayers… to Jackson and Doc it seems like the Con is a way of bridging reality and their show– whenever they see a butterfly henchman costume, it feels real, since the geeky socially awkward henchmen really would attend a comic convention, and would most likely be lazy enough to use their uniforms as their cosplay outfits. Whatever the future holds, Jackson and Doc are in it together– they’ve got a great dynamic, as creators, as press conference entertainers, and as friends– as Jackson describes it, his relationship with Doc is summed up with a pack of cigarettes. If he’s out and Doc ventures out of the Astrobase to get him a pack, Jackson never pays Doc, because he knows he’ll grab the next pack when Doc is most likely too busy painting another sad lady in her undies. And it’s a beautiful thing.