NYCC 2013: On the Floor with Pop Culture Shock Collectibles 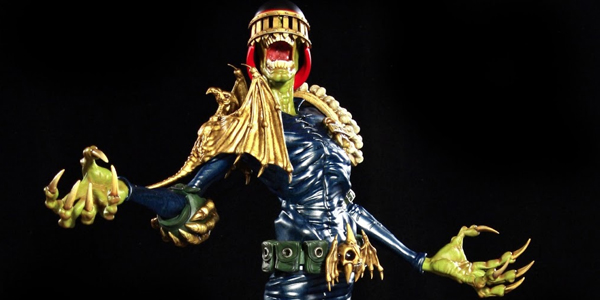 Founded in 2008 by Jerry Macalusco, who had previously sculpted for the likes of Toy Biz, Mattel, Diamond, McFarlane, and more, Pop Culture Shock Collectibles has been bringing our favorite comic, game, and film characters to life in stunning, fully-realized works of art.  When passing by their booth at New York Comic Con, attendees couldn’t help but do a double-take at the incredible pieces they had on display.

Cast in museum-quality polystone and standing a whopping 21” tall, Judge Death was one of my favorite statues being shown.  PCS spared no detailed when immortalizing the leader of the Dark Judges into this brilliant 1:4 scale piece.  The standard version, shown at NYCC, is strictly limited to 275 units and a price tag of $360.  A PCS-exclusive “Death Sentence Edition” is available through the Pop Culture Shock website and includes two interchangeable hands holding the impaled and disembodied head of an Angel Gang member and an impaled Judge’s helmet as well as a replaceable head featuring a big, menacing grin.  This version goes for $375 and is limited to 125 pieces – both will be shipping in the coming weeks.

Masters of the Universe was well represented, with He-Man and Beastman 1:4 statues on display along with a show-stopping life size bust of Skeletor.  Outifitted with a real cloth hood, the Skeletor bust goes for $675 and is limited to 300 pieces.  Similarly to Judge Death, direct orders to PCS can be made at the same price point for a version with light-up red LED eyes which is limited to only 125.  Both are due in early 2014.  The excellent He-Man statue is frozen in the classic “By the power of Grayskull” pose and recreates a perfect likeness of the animated hero.  He’s due out in Q2 of 2014 for $324 while details on the price point and release window for the awesome-looking Beastman statue are still to be announced.

Shoa Khan and Sub-Zero of Mortal Kombat fame are each getting 1:4 polystone statues which a set to ship late this year, with Sub-Zero donning his costume from Ultimate MK3 and available in a PCS exclusive with swappable “ice arms.” Everyone’s favorite Shokan warrior, Goro, is getting a jaw-dropping mixed-media statue which stands a full 24” tall, features a real cloth costume, and will be limited to only 350 pieces.  Set for release in Q2 of 2014, pre-orders begin on October 21st – best to get in early on this one, which is limited to only 350 units.  Pop Culture Collectibles also has a massive catalog of items related to another classic fighting game franchise, Street Fighter.  On display at NYCC was a 1:4 statue of Alex as well as a “diorama” piece featuring Akuma in mid jump-kick, battling Gouken.  Considering the size and outstanding detail, the $330 price tag for this epic match-up is pretty reasonable – and for $20 more, you can also get the PCS exclusive which features light up LEDs in the energy blast area where the two fighters are colliding.

Finally, for fans of Pendleton Ward (and judging by the scores of Adventure Time cosplayers that spread across the Javits Center like a plague, there are many of them) Pop Culture Shock is offering a slew of Bravest Warriors items.  Showing up in early 2014 will be sizable bobbleheads of Catbug, Impossibear, and Jelly Kid priced at only $9.99 and also a large Catbug vinyl figure complete with sound which sells for $39.99.  Rounding out the line are bendies on the main cast that are also priced under the $10 mark.  The bendies actually look like quality pieces and not the cheap-o junk one might associate with the medium.  It actually may be the perfect way to bring character designs such as these into the collectible/toy world.  This was a fantastic showing from PCS and their display had a commanding force on the con floor. While the price point of many of their polystone creations may be prohibitive for some collectors, the quality is worth every penny. 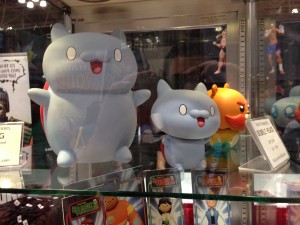 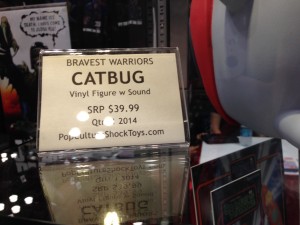 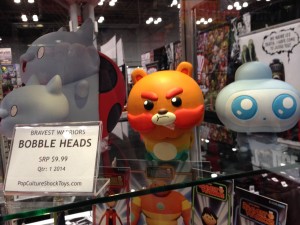 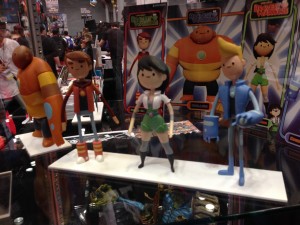 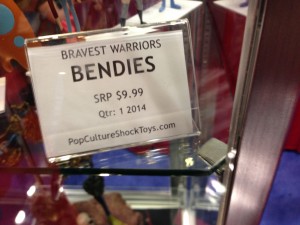 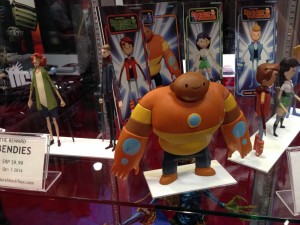 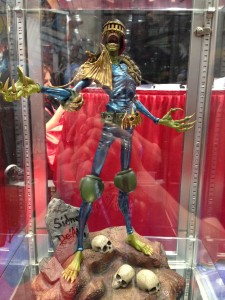 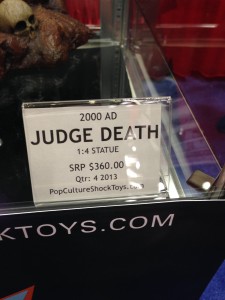 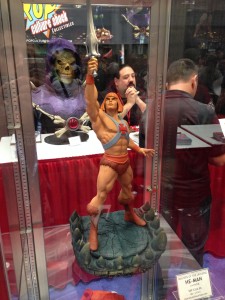 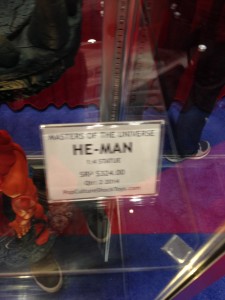 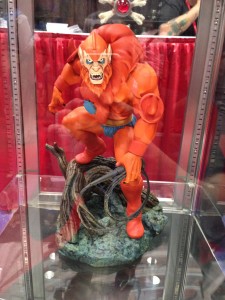 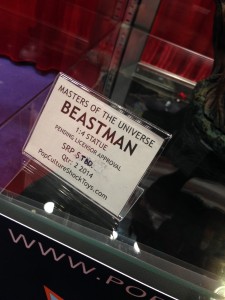 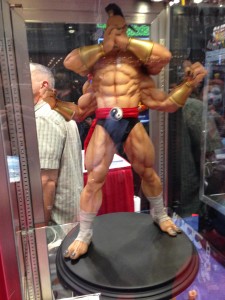 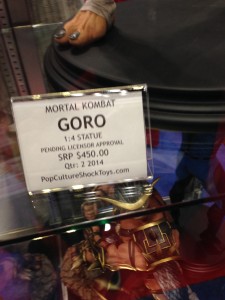 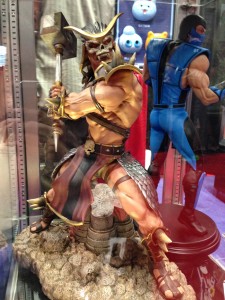 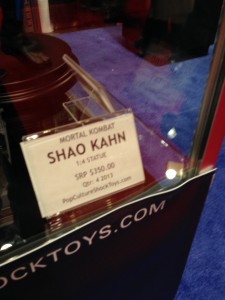 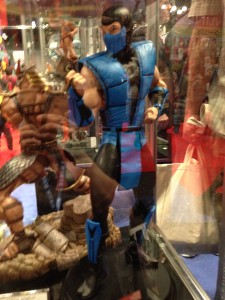 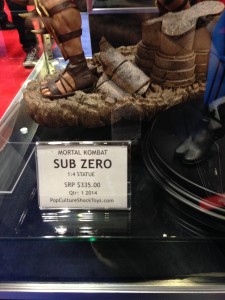 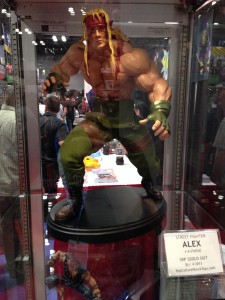 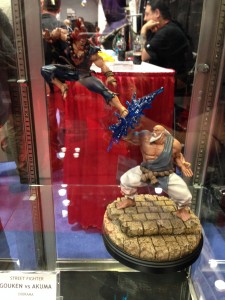 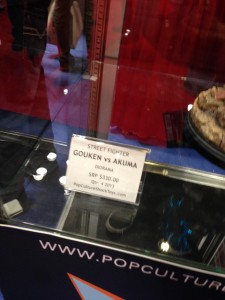 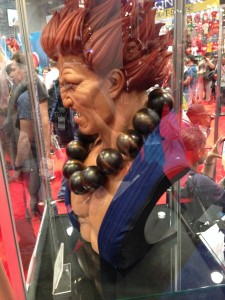 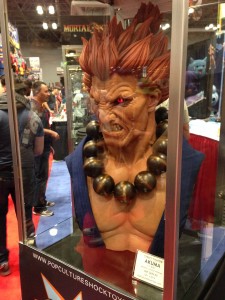 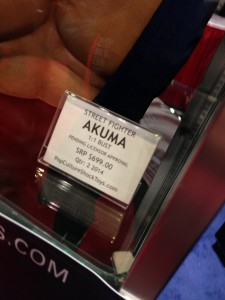 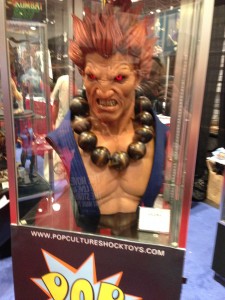 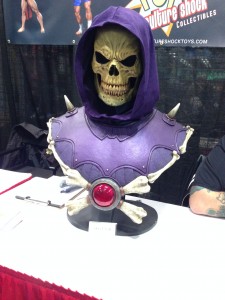 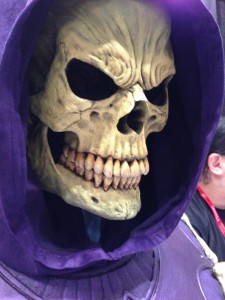 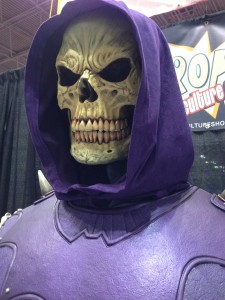 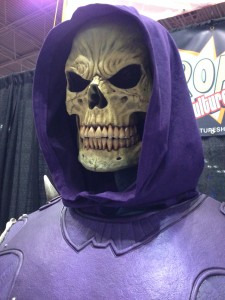