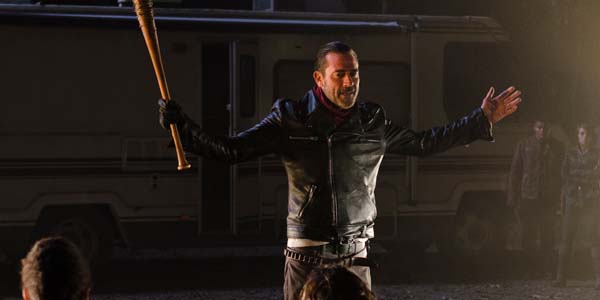 The Walking Dead panel opened with some comedic entertainment before the cast was announced. On the stage they played music, gave away a couple signed posters, and got the crowd jumping to the music, before the cast came on stage and the crowd was electric.

Chris opened up by telling everyone he does not know who gets killed this upcoming season, a question he has been asked since the season ended in the spring. They tried to dance around it as much as possible, but as time went on it got harder and harder to hide the clues the cast and clips were letting out.

Most of the panel consisted of the cast talking about the previous season, how after six years the cast has become like family and that they care as much about the show as the fans do. There was thunderous applause for Melissa McBride, as Carol has become such a fan favorite, and come a long way since Season One.  She talked about her character’s tribulations and trying to adjust to the new world order along with her inner struggle of trying to move on from the group. She loves her story line and enjoys playing Carol.

Although the whole cast was up, the focus was on Jeffery Dean Morgan.  They talked in depth about Negan and how much worse and better he will be than the Governor. Negan’s control over his world was also a focal point, as Morgan explained that people feared him which is why they follow him.

There was very little focus on Norman Reedus, the only question asked was what does he think Daryl was feeling at that infamous moment that they were all kneeling in front of Negan. Norman responded Daryl was filled with fear of dying that night.

Just as the panel started to wind down, things got very interesting… some questions bought up a lot of feelings for Lauren Cohen, who plays Maggie. She broke down during the session and was telling the panel and crowd how much she enjoyed the show and the fans. The panel got uncomfortably quiet, and Chris quickly jumped in to try to move on quickly, saying the reason the show does so well is the passion of not only the fans but the actors as well. That was a big clue, and the next was in the teaser from the show.

Here’s a theory– I have been accused of being a sort of Inspector Gadget, and I tend to pay close attention to details and people– I think the NYCC panel proves that Maggie is the one who dies. She broke down at the panel and everyone on the panel got real quiet and a bit edgy when she got so emotional. And in the teaser, Rick has blood on the right side of his face… if you go back and watch last season finale, that blood wasn’t there when he knelt down. So the person who was killed was most likely to his right, and close enough to catch fresh blood like that. It could be Abraham… but the better bet is Maggie, as she was directly next to him. And she would be the most devastating choice, since she’s been part of the group for so long, and she’s carrying a child.  Since Judith survived (unlike her death in the comics) all the stories revolving the loss of a baby and wife can be shifted from Rick to Glenn. Is it true?  Two weeks, and everyone will know.

The other big moment was between Negan, Rick, and an axe. It’s possible Rick will finally lose a hand in the opener.  This season begins in October 23rd. The Walking Dead Season 7 finale will be episode 99, Season 8 is confirmed with the premiere as Episode 100.