The Horde Gets a New Member, Octavia 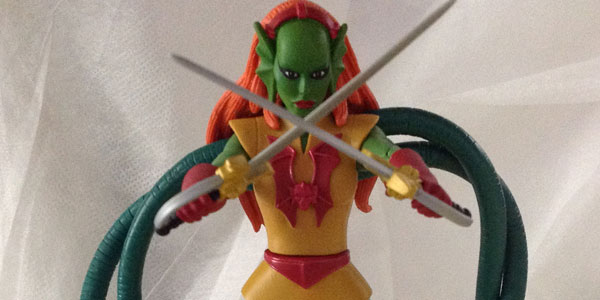 One thing our June figure Octavia has over the other prior releases this year is the sheer amount of accessories she packs. She feels like a $25 figure (and even a $27 figure) for day of sale purchasers. I have always been a fan of action figures that come with a lot of accessories, including four swords four tentacles, and a crossbow. As a female figure of a Horde enemy that never saw a toy, as well as the fantastic design by the Four Horsemen, she is an action figure that should appeal to hardcore collectors and casual fans alike. The question is whether or not she is greater than the sum of her parts. The answer is yes and no.

She is pretty much exactly as you remember from the series, with the exception of the hotly-debated skirt. I could tuck mine in to resemble trunks just fine. On the one hand it seems Mattel the doll company  can’t seem to get a leotard correct on a female. On the other hand I actually appreciate the design choice. From a design perspective it matches her sleeves, and the flatness of the skirt reminds me of a rubber webbed skirt for better swimming in the water. I do wish they would spruce up the bland design of the cartoon likenesses on the action figures. Fortunately for her there is a lot of design elements that hide the plainness of her attire very well. Her swords are identical with Horde hilts and the crossbow is the most gorgeous creation the 4H have concocted in a long while.

The only issue I have are with the tentacles. That’s a lie… her ankles are very weak as well, matching complaints from numerous owners. This is especially unfortunate because the tentacles make her a very heavy figure. I was very surprised they didn’t use the injection molded ankles for the unique boots. The tentacles can be attached anywhere on the back among four ports. You can have her in a beautiful relaxed pose or with her tentacles flared, ready to strike. The movement of the tentacles, because of the hair, is only lateral to the sides. I understand the decision to not make the tentacles bendy, however, one cut joint on each tentacle would’ve made a world of difference. Her tentacles are ringed and the articulation could have been concealed easily . She cannot duel with anyone directly in front of her, unless she is holding the sword in her own hands. She is a beautiful action figure to display, and she will be very bold as a character on your shelf.

Octavia is one of those figures that, once again, had all the tools to be a dynamic toy based on an interesting Filmation design, and fear of making the same mistakes twice relegates her to merely excellent, if that can be considered a minus. I will not understand the lack of foresight in placing the tentacles in odd poses. These are ACTION figures first and foremost. As a figure she is 100% with the money, 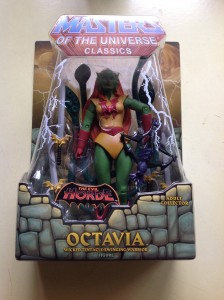 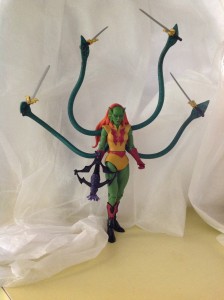 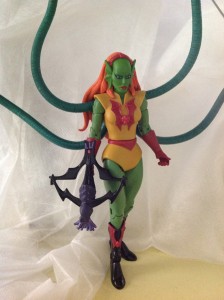 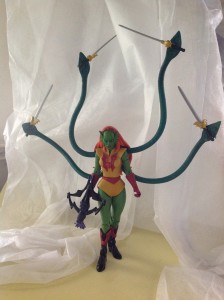 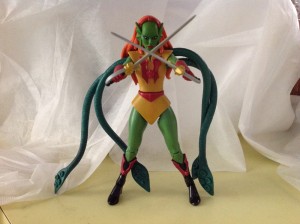 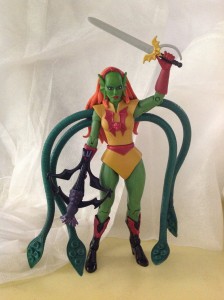