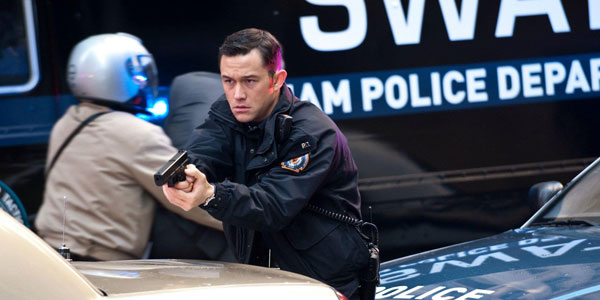 One of the things everyone seems to agree on regarding The Dark Knight Rises is Joseph Gordon Levitt’s rookie cop John Blake.  Blake has the best arc in the movie– and possibly Nolan’s entire trilogy– and his conclusion offers the most fascinating part of the ending of this series.

Big time spoilers are below, so if you haven’t seen The Dark Knight Rises yet, I urge you to read ahead at your own peril!

John Blake is a new addition to the cast in Nolan’s series, and provides a good audience surrogate character throughout the turmoil of the story, as Bane holds Gotham under siege in his warlord’s grip.  This in and of itself is great, because it allows other characters– from Bruce Wayne to Jim Gordon– off the hook as our surrogate character, giving them the breathing room they need to each follow their own paths throughout the movie.

On top of this, Blake basically gets to play the Robin role, as Batman’s sidekick, after proving himself to the hero early on as a strong fighter, a smart detective and a decent man.  I love that Nolan found a way to work the boy wonder into his series after all, accentuated by Levitt’s perpetual boyish looks, and eventually a more overt nod with the reveal of Blake’s “real” name.

But Blake’s most important role in the movie is the slowly-building realization that he is being groomed as the heir apparent to the cape and cowl.  As the idealistic cop’s arc continues, he realizes as Bruce did years before that sometimes the order of the law isn’t enough, and he is imbued with a sense of true justice that makes him the ideal candidate to take over as the new Batman in Bruce’s absence.

Waiting until the epilogue to pay off this reveal seems a little cheap– watching the movie I wanted to see Blake don the mask itself leading up to the finale, a take on Dick Grayson’s adoption of the Batman role during the Death of Bruce Wayne storyline in the comics. I thought they were avoiding this so they could keep intact a resolution of Bruce being the one to square off for a final round against Bane, but this wasn’t really the case (seeing as how Bane is killed by Catwoman)… but the more I thought about it, I like that Blake doesn’t become The Batman on screen.  Looking at Batman’s actions– from the comics to Nolan’s movies– his true role is to protect the innocent, and Blake’s actions as he tries to save a busload of orphans from the impending explosion that will destroy Gotham, is a much more overt way to illustrate him as a protector, and it’s far more effective than having him be another guy punching another guy in the face in the melee downtown.

It proves that Bruce was right about him, and that Blake has exactly the right priorities to do the job he has to in order to keep Gotham safe.  The payoff of Blake receiving his instructions from Bruce after the hero has (disappointingly) faked his own death is the high point of the film’s epilogues, and following him through the waterfall into the reveal of the Batcave is the only thing in The Dark Knight Rises that really left me dying for more.  The universality of Batman has been an ongoing theme in Nolan’s trilogy, but the naming of a worthy heir apparent was not something I expected to see on film, and was a welcome surprise.

But like many moments in the trilogy, the thrill of Nolan’s fantastic storytelling abilities kind of caves in when you stop to think about it– Bruce could be Batman because he didn’t have any other obligations: had a large fortune and a major company which helped him develop his gear.  Blake is a newly out-of-work cop, in a completely devastated city, with no resources we know of, no Wayne Enterprises or family fortune to back him… just a cave and a mask.

Maybe this was part of Nolan’s plan, a meta sort of turning the tables on the criticism he himself has frequently received– by the end of The Dark Knight Rises, Nolan finally gives up his steadfast commitment to gritty realism and embraces the fantasy– there will always be a Batman, and all he really needs is the determination and the mask.

It’s illogical and romantic and impractical and completely based in the pulpy fantasy of comic books.  And finally, after three movies, it’s up to us to decide whether this finale will be crushed by reality or allowed to spark a new adventure in our imaginations.