Inside Out: The Most Important Movie To See This Summer 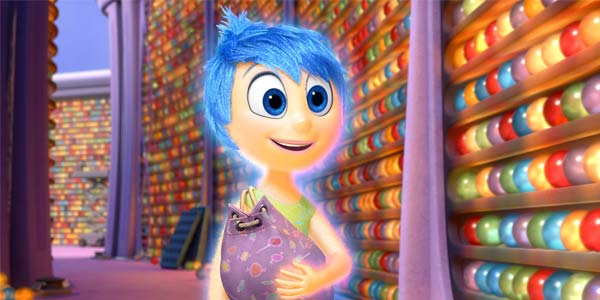 Pixar’s latest is one of the most honest, engaging and powerful films of the year.

The very best films from Pixar’s history are appreciated for many reasons– technical ability, smart storytelling, tactical voice casting and iconic characters of course all play a major role– but more than anything, Pixar’s films tend to deliver a refreshing complexity in the morals of their modern day fables.  Movies like The Incredibles, Up, and Wall-E leave us satisfied on a purely narrative level, but often inspire deeper consideration of what the film is truly saying, reminding us that answers aren’t always easy.  Inside Out is cut from the same cloth, offering a profoundly insightful, complex perspective on emotional health, while simultaneously entertaining us with one of the most energetic, fun and thrilling adventures we’re likely to see on the big screen this summer.

Inside Out starts with– no pun intended– a very heady conceit: Our main cast is made up of the five emotions inside the mind of a 12-year-old girl named Riley, whose family just moved from Minnesota to San Francisco.  Until now, Riley’s emotions have been governed by Joy (a perfectly cast Amy Poehler), who has established herself as the alpha among her fellow emotions Fear, Disgust and Anger.  Sadness– the second emotion to appear in Riley’s early development– is the only one Joy has never really understood, so she tends to sideline her whenever possible.

An accident inside Riley’s emotional control center leaves both Joy and Sadness stranded in the girl’s subconscious, and they must find a way back in order to prevent Riley from descending into depression.  This serves as the perfect metaphor for our parallel story, as we follow Riley in real life, trying to come to terms with the fact that her entire life has been uprooted, leaving her in a strange place filled with people she doesn’t know, and a crushing obligation to appear strong and unaffected to help ease her parents’ own stress.  We follow Riley’s emotional story in both the real world and the subconscious, and each is given the perfect amount of time to establish drama and true stakes, never straying far from one another thanks to the film’s precise pacing.  It’s one of the many aspects of this movie that director Pete Docter gets completely right– we care deeply for Riley’s plight, and understand the critical importance of Joy and Sadness’ quest based on what we know will happen to this little girl should they fail.

Along the way, Joy and Sadness encounter a number of characters and locales within Riley’s mind, and this entire world is beautifully realized.  From the seemingly endless archive of memories, to the islands of personality– those things which Roley loves and values, which shape her to be the person she is– this metaphorical landscape is both abstract and governed by its own distinct and clearly established system of rules.  I won’t spoil the specifics of Joy and Sadness’ story (nor Riley’s for that matter), but I will say that Inside Out goes out of its way to avoid any lazy, easy paths– in a lesser movie, Sadness would be the villain who must be defeated or at least controlled, but that isn’t what’s going on here.  The story does have a villain of sorts, but it’s an intangible one, an ominous presence that attempts to overtake Riley’s inner landscape.  I’m talking about depression.  It’s a very conscious decision not to personify depression in this film, and it’s totally the right one.  Depression is not the domination of sadness, but a void, an emptiness that shuts us off, from the things we care about, from other people, and from our own emotions.  As Riley slips more and more, depression doesn’t just hurt her memories… it destroys her islands of personality.  When this happens, it’s truly scary to behold. 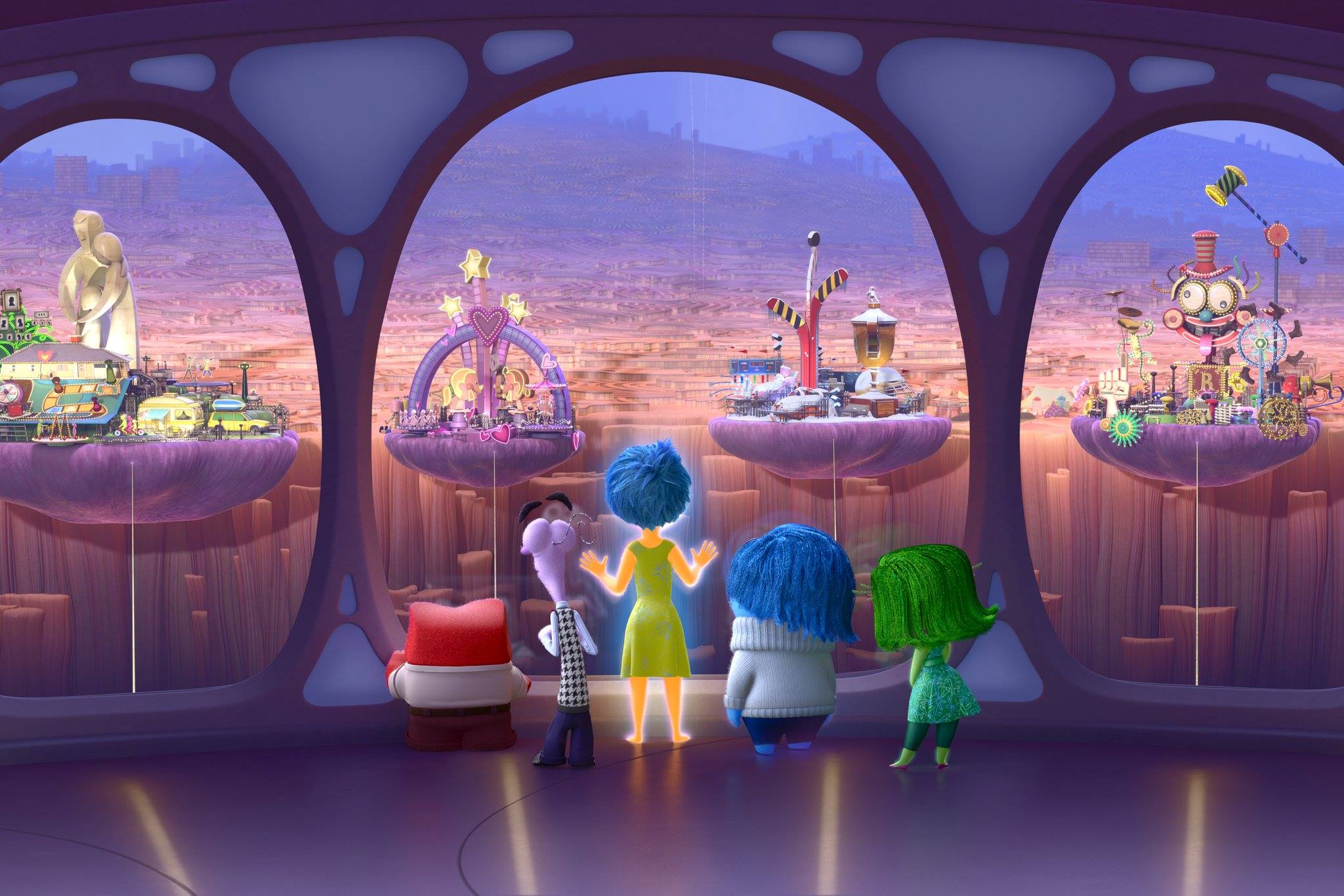 Before I go any farther, though, I should point out the other miracle of Inside Out.  If what I said so far makes this all feel like a heavy, analytical slog of a movie… it isn’t.  Yes, there are some astonishingly deep thoughts going on all over this movie, but it is packaged in a brilliantly bright, fun way that allows Pixar’s talented team of animators to expand in an entirely new direction.  Taking full advantage of an ensemble of abstract concepts as our main characters, Joy and her fellow emotions don’t have to obey the laws of physics and reality, which typically govern Pixar’s films to an extent.  These characters get to be much more cartoony– if one of them falls down, they flatten out… if one is dragged by the arm, that arm stretches… if one is burned their face gets charred until they shake their head.  This gives the movie a straight-up Looney Tunes vibe, and it’s really exciting to see these classic cartoon dynamics at play, through the incredibly talented Pixar lens.

I mentioned Amy Poehler earlier, but the rest of the cast is equally outstanding.  Phyllis Smith’s Sadness is incredible, and she has my favorite arc of the entire movie (aside from Riley herself).  Bill Hader’s Fear, Mindy Kaling’s Disgust and Lewis Black’s Anger are all great fits for their roles, allowing each actor to lean in to their respective shtick, but in a way that only adds to the manic loss of control that happens when Joy goes missing.  Kaitlyn Dias is wonderful as Riley, a character compelling enough that she could be the star of the movie even if we only followed her story.  She’s so cool, a thoughtful and silly kid who feels not only real, but legitimately interesting.  Her relationships with her parents are anything but rote, and her passions and personality are delightfully specific.  Again, in lesser hands, Inside Out‘s human host would be much more generic, but here Riley is every bit as unique and interesting as her emotions (who may, in fact, just be her own imaginary interpretation of what’s going on inside her mind).

There’s lots of great bits throughout this movie, and all the comedy comes from these fully realized characters.  There’s a running joke where we cut back to the emotions inside other characters– most often Riley’s mom and dad– which was seen briefly in one of the early trailers.  On its own, the premise seemed cliche and kind of lame… Dad’s emotions watching a sports game!  Mom’s dreaming of a hunky guy in paradise while trying to get Dad’s attention!  Men and women are different, get it guys??… But in the context of the movie, I loved this dynamic, especially how it helped to establish these characters and offer insight into their own actions.  It’s so telling that Sadness is the main emotion in Mom’s head, and Anger gets that role for Dad.  Rather than feel like a winking, sitcom nod, these choices feel like true character work, and it all works to tell us exactly who these people are.

Pixar has a reputation for telling surprisingly complex stories, which don’t always have the easiest of answers.  Inside Out really stands out in this regard.  This is a movie incredibly confident in its complicated, deep, and– above all– honest message.  Whether it’s because of Joy and Sadness’ journey or her own real life experience, Riley is a different person by the end of the movie, and how she gets there is one of the most moving stories you will see all year.  This movie is funny, insightful, and if you’re anything like me, it will leave you with a lot to think about in terms of our own personal emotional infrastructure.  To get all that out of a cute summer Disney movie is amazing, and it reminds us that Pixar deserves their title as the very best house of modern animation.